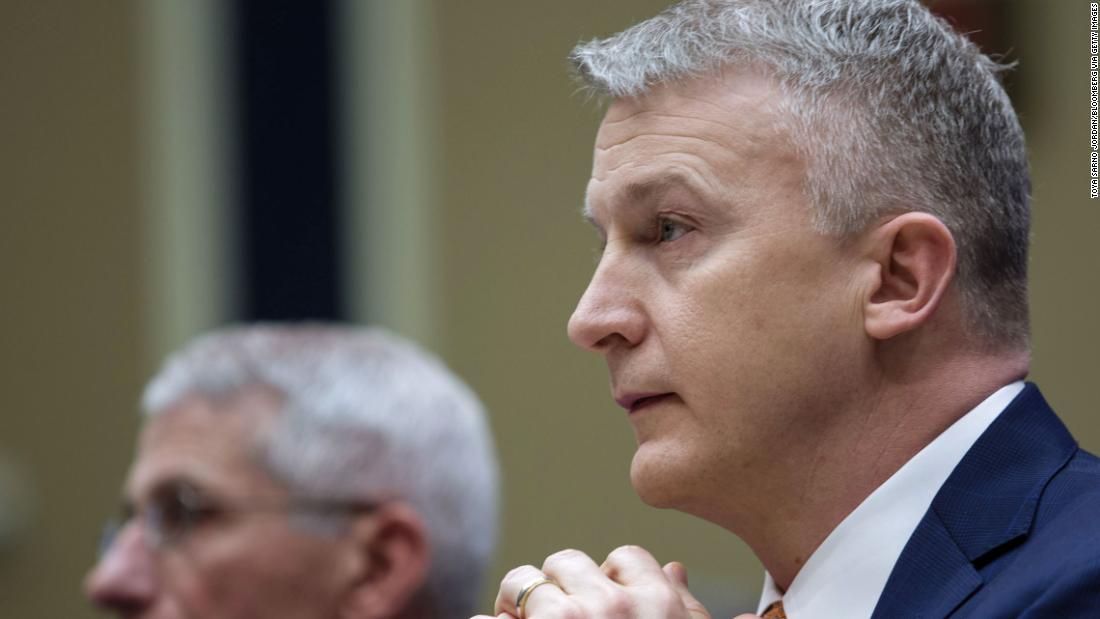 Bright slammed the Trump administration’s coronavirus response and urged lawmakers to listen to the voices of scientists to prevent “unprecedented illness and fatalities.”

Bright said there is still no “master, coordinated plan” and noted that a “comprehensive strategy” was needed to combat the coronavirus pandemic that included widespread testing, tracing and ongoing efforts to “develop a cure,” as well as what to do with a vaccine once one is developed.

A constant refrain from Bright throughout his hearing was highlighting what he considered a lack of coordinated strategy from the White House, including when Bright said he was “quite alarmed” over a shortage of swabs needed for testing.

“And I was even more surprised that the Strategic National Stockpile did not plan or have any of those in supply,” Bright said, echoing his opening statement, where he said, “Without better planning, 2020 could be the darkest winter in modern history.”

Bright, who was removed as head of the Biomedical Advanced Research and Development Authority (BARDA) last month, also warned of a failure to plan around the release of an eventual vaccine. When asked by Democratic Rep. Frank Pallone of New Jersey if Bright thought the supply issues the US has seen with testing and the drug remdesivir could also happen with vaccines, Bright answered, “Absolutely, sir.”

Bright said he began to get alerts that the supply chain for masks and other personal protective equipment was “diminishing rapidly” back in January. But when he forwarded the alerts to leadership in the US Department of Health and Human Services, as well as with national infrastructure and stockpile teams, he said they were ignored.

Bright said that he would “never forget” an email from Mike Bowen, the hearing’s other witness and the vice president of the medical supply company Prestige Ameritech, indicating that the US supply of the N95, the respirator masks used by health care professionals, was at a perilous level.

Bright said he “pushed” that warning “to the highest levels” he could at Health and Human Services but received “no response.”

“I was met with indifference, saying they were either too busy, they didn’t have a plan, they didn’t know who was responsible for procuring those,” he said in his testimony, adding ‘A number of excuses, but never any action.”

Bright said that in a meeting on February 7, Health and Human Services leadership said they did not believe there would be a shortage of N95 masks.

“My response was, ‘I cannot believe you can sit and say that with a straight face.’ It was absurd,” he said.

The supply shortages caused needless deaths, according to Bright, and continue to put health care workers in harm’s way.

“Lives were endangered, and I believe lives were lost. Not only that, we were forced to procure the supplies from other countries without the right quality standards, so even our doctors and nurses in the hospitals today are wearing N95-marked masks from other countries that are not providing the sufficient protection that a US-standard N95 mask would provide them,” Bright said.

‘There were some attempts to bypass’ a vetting process for hydroxychloroquine

The Trump administration rushed out recommendations about the drug hydroxychloroquine to treat coronavirus, Bright said.

“We have a very rigorous scientific review process for all the investments that we make for the drugs, vaccines and diagnostics through BARDA and through our department,” Bright said, a reference to the agency for which he used to be the director, the Biomedical Advanced Research and Development Authority.

“There were some attempts to bypass that rigorous vetting process that caused me great concern,” Bright added.

Bright’s whistleblower complaint alleged he was removed from his post in retaliation for opposing the broad use of hydroxychloroquine.

Bright called the White House’s vaccine timeline an “aggressive schedule” and warned that if the administration rushed too quickly to get out a vaccine, the country may not have a full assessment of its safety.

“There’s no one company that can produce enough for our country or for the world,” Bright told lawmakers. “We need to have a strategy and plan in place now to make sure that we can not only fill that vaccine, make it, distribute it, administer it in a fair and equitable plan.”

“We don’t have that yet and it is a significant concern,” he said.

GOP members question need for hearing and its timing

Some Republicans on the subcommittee said that the hearing shouldn’t have been held at all, citing other needs for Congress to respond to the Covid-19 pandemic.

Rep. Michael Burgess of Texas, the top Republican on the panel, said “every whistleblower needs to be heard,” but added the hearing was “premature” and a “disservice” to the Special Counsel’s investigation since Bright’s complaint was filed only a week ago.

And Republican Rep. Richard Hudson of North Carolina claimed that the hearing was not about the whistleblower complaint but “undermining the administration during a national and global crisis.”