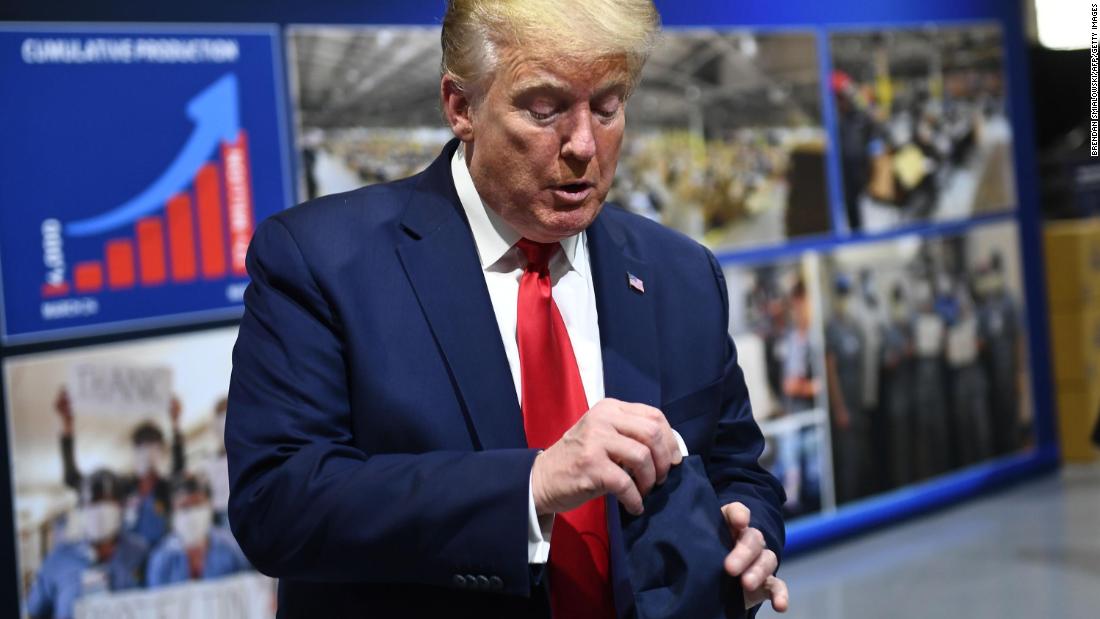 “I didn’t want to give the press the pleasure of seeing it,” Trump said before showing off his fabric face covering, which he said he’d briefly strapped on backstage before removing for a tour of the factory. “It was very nice. It looked very nice. They said not necessary.”

“It’s up to him,” said Bill Ford, the company’s chairman, when asked why Trump wasn’t following his company’s guidelines. Later, a company spokesman said Ford — the great-grandson of company founder Henry Ford — “encouraged President Trump to wear a mask when he arrived.”

“He wore a mask during a private viewing of three Ford GTs from over the years,” the company said. “The President later removed the mask for the remainder of the visit.”

The President’s visit to Michigan might have been a simple opportunity to highlight the cautious reemergence of American manufacturers.

Instead it became a testing ground for the fraught politics of pandemic: whether leaders should wear masks, whether citizens can vote by mail, whether factories are safe to reopen and whether Democrats and Republicans can forge any semblance of unity amid a generation-defining crisis.

Trump has planted himself at the center of each of those issues as he encourages states to lift restrictions that have closed businesses, forced residents to remain at home and frozen a national economy that once anchored his reelection argument.

“A never ending lockdown would result in a public health calamity,” Trump said in remarks on the factory floor. “To protect the health of our people, we must have a functioning economy.”

“Americans who need and want to return to work should not be vilified,” he added. “They should be supported.”

Thursday’s visit to a Ford components plant in Ypsilanti was intended to highlight a facility that was repurposed to build ventilators after concerns were raised about a nationwide shortage. He also met with national and local African American leaders, a community that’s been disproportionately affected by the pandemic.

But even before arriving Trump guaranteed the visit was about a lot more. He tweeted a day ahead of the stop that the state’s attorney general was breaking the law by sending absentee voting applications to every person in the state, an extension of his efforts to cast doubt on an election feature that is poised to play a major role in pandemic-era democracy.

He openly sparred with Michigan’s Democratic Gov. Gretchen Whitmer, who has criticized the federal government’s response to the crisis and who, in turn, has been termed “the woman in Michigan” and “Half-Whitmer” by the President.

And he refused to wear a mask in public, despite recommendations from the federal government that Americans cover their faces when social distancing is difficult. The Ford plant he visited on Thursday requires them for all visitors, “at all times, in all locations,” according to the company’s reopening handbook that was shared with the White House.

While Trump said he did wear one when he arrived, he had removed it by the time he was in front of cameras.

“I look better in the mask, but I’m making a speech,” the President said, holding up a custom dark blue face covering with what appeared to be the presidential seal stamped in white. 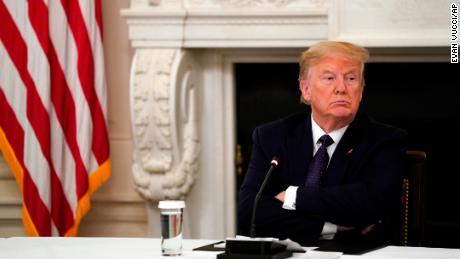 Before the visit, a Ford spokesman said the White House would “make its own determination” on whether Trump would wear a mask. He’s resisted wearing one in public, believing it might send the wrong message to a country he is working to convince to return to normal.

On Thursday, he dismissed the notion he might set an example to Americans, who have been encouraged by the federal government to wear face coverings in public.

On two previous trips over the past weeks, Trump hasn’t worn a mask even as nearly every other person at the facilities he visited did.

The risk of contagion appears particularly acute at manufacturing facilities. Just days after reopening, two separate Ford factories were forced to shut again this week because employees tested positive for Covid-19. Neither was the plant Trump visited on Thursday. But it was an illustration — and perhaps a harbinger — of the halting process of reviving a sector Trump has long heralded as the jewel in his economic crown.

While Trump said Thursday he would extinguish any “embers” of the virus should it emerge later this year, he proclaimed he would not close the country again.

Ahead of his visit to Michigan, the state’s attorney general Dana Nessel sent Trump an open letter imploring him to wear a face covering during his visit, saying he had both a “legal” and “moral” responsibility to do so.

“Anyone who has potentially been recently exposed, including the President of the United States, has not only a legal responsibility, but also a social and moral responsibility, to take reasonable precautions to prevent further spread of the virus,” Nessel wrote. 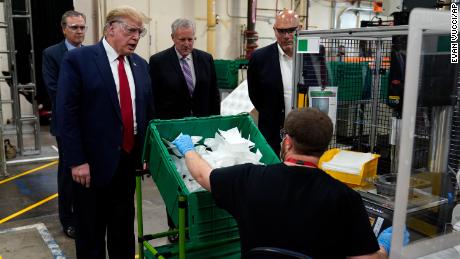 Two White House staffers recently tested positive for coronavirus, but Trump has not been found to have it. He, along with any person who comes into close proximity with him, is tested using an Abbott Labs rapid diagnostic product, though the US Food and Drug Administration has cautioned those tests may produce high rates of false negatives.

Appearing on CNN on Thursday morning after sending her letter, Nessel expressed doubt that Trump would adhere to the factory’s rules.

“If we’ve learned nothing over the last several years of President Trump in the White House, it’s that he doesn’t have the same level of legal accountability as everybody else,” Nessel said.

Nessel, a Democrat, is one of three female Michigan politicians who have found themselves in Trump’s sights over the past week. Secretary of State Jocelyn Benson was forced to correct the President on Wednesday after he issued a morning tirade about her effort to distribute absentee ballot applications to all 7.7 million registered voters in the state.

Trump originally proclaimed the state was sending “absentee ballots to 7.7 million people ahead of Primaries and the General Election,” declaring the action was “done illegally and without authorization by a rogue Secretary of State” and threatening to withhold unspecified levels of funding.

Later, he corrected the tweet to say “absentee ballot applications.”

But he repeated a falsehood that it was illegal, and failed to mention that Republicans in other states have taken similar or even identical steps during the coronavirus pandemic.

“Obviously, there’s going to be fraud,” Trump said while at the Ford plant. “We’re not babies.”

Trump’s selection of Michigan for the visit carries obvious political meaning; he won the state by the narrowest of margins in 2016 and needs a repeat in November. As he resumes official travel after months-long isolation at the White House, Trump is focusing on states that factor heavily into his reelection plan, including Arizona and Pennsylvania.

He’s also seemed to target states where Democratic governors face resistance from Republicans on their pace of reopening. During a stop in Allentown, Pennsylvania, last week, Trump chastised Democratic Gov. Tom Wolf for not opening quickly enough, saying residents were ready to get back to work.

Trump has issued similar criticism of Whitmer, whose extension of a state emergency order drew armed protests at the state capitol in Lansing. Trump encouraged her to negotiate with those who were angrily insisting that stay-at-home orders be lifted.

Whitmer, who is thought to be under consideration as a potential Democratic vice presidential candidate, rebuffed Trump’s idea. The two did speak on Wednesday after dam failures caused historic flooding.

But she wasn’t invited to participate in Trump’s tour of the Ford facility on Thursday.

“I don’t think there was a particular reason,” the President’s spokesman Kayleigh McEnany said on Wednesday when asked why Whitmer wasn’t asked to participate. “It didn’t come up.”