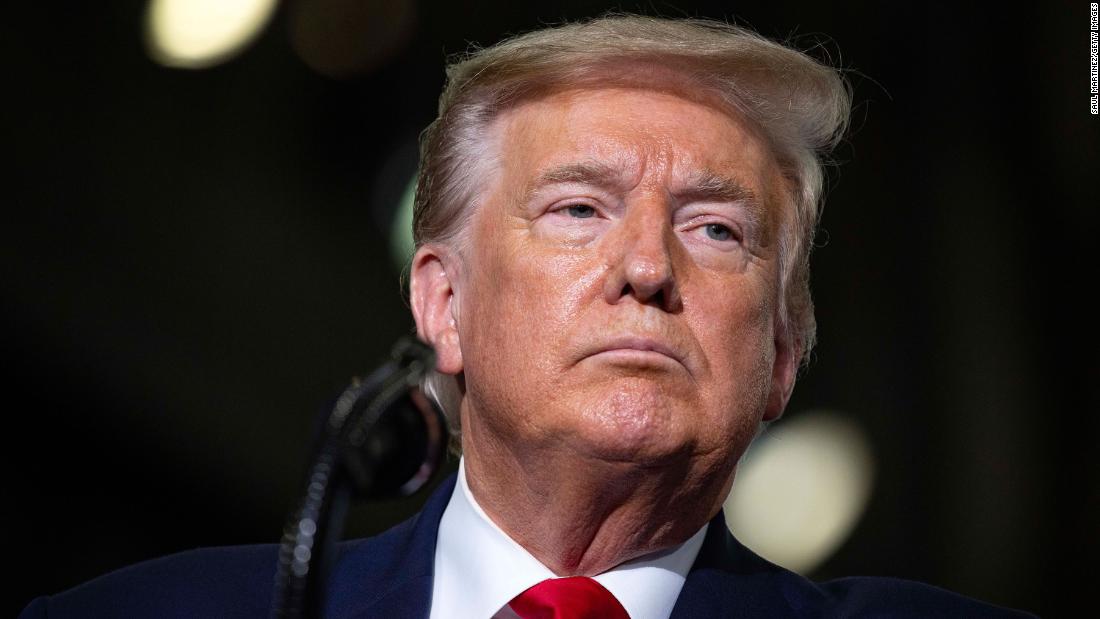 Far from acting to restore calm, Trump’s instinct has been to exacerbate the sense of crisis and division — blasting the demonstrators as “THUGS,” calling for crackdowns and vowing to declare the coalition of Antifa anti-fascist and anarchist activists, which he sees as instigators of the protests, as a terror group. But the President’s threats to so designate a domestic group have no grounding in law and he has been more reticent to censure white supremacist groups in the same way. And his efforts to portray the protests as a purely radical uprising are not reflected in the make-up of crowds and deflect from the underlying catalyst for the protests.
Abroad, Trump is accelerating a new Cold War with China as he seeks to lay blame for the coronavirus pandemic that has infected 1.7 million Americans. His pullout from the World Health Organization amid the worst global public health challenge in 100 years is meanwhile leaving notions of US leadership in ruins.

As Trump fumes, the country is getting a glimpse of how a President with authoritarian reflexes handles a public order crisis and a potential preview of the no-holds-barred politics with which he plans to win reelection in November.

As a sixth night of violence heated up on Sunday, Trump, for instance, lashed out at Democrats and their party’s presumptive nominee Joe Biden as he sought to revive his 2016 claim to be the “law and order” candidate — a characterization that could help him distract from his mishandling of the pandemic.

“Get tough Democrat Mayors and Governors. These people are ANARCHISTS. Call in our National Guard NOW. The World is watching and laughing at you and Sleepy Joe. Is that what America wants? NO!!!”

In normal circumstances, a president could be expected to call for calm and perhaps deliver an Oval Office address.
Even if he possessed such empathy and intent, Trump’s history of racist positions on controversies like the Central Park Five, former President Barack Obama’s birthplace and Charlottesville protests disqualifies him as a force for unity at a time of political tension.

As he often does, for instance in aggressively touting economic reopening against scientific advice, the President appears to be making a counter-intuitive political calculation that confounds many Americans worried about public health or looking for a consoler-in-chief. He seems to be trying to brand the protests as the work of extremists and agitators so that he can make Democrats look weak by comparison. But his loaded language also risks alienating swing-state suburban and women voters whom he needs to win reelection.

Contrary to the views of many of his critics, Trump cannot be blamed for everything. America’s social and ethnic divides and inability to purge racist cops predate his presidency by generations.

Most nations have struggled to deal with the once-in-a-century plague of Covid-19. And though it was not universally expected, economic destruction was the inevitable consequence of scientifically-ordered lockdowns.

But presidents are judged on how they handle crises on their watch. And Trump’s habitual methods, seeking personal political gain from extremis and social alienation, appear to make all the cascading crises worse.

His rejection of science and embrace of alternative facts are raising questions about the feasibility of a safe economic reopening as viral infections rise in 21 states, stay steady in 13 and are down in 16.
Trump invoked racist language from the 1960s when he tweeted “when the looting starts, the shooting starts,” which only fueled the incendiary tone around Floyd’s death. The next day, the President tweeted that if protesters breached the White House’s fence, they would “have been greeted with the most vicious dogs, and most ominous weapons, I have ever seen.”
He has sought political traction for his strongman act by blaming “liberal Democrats” who lead cities and states for failing to halt rioting and looting. And the violence allowed Trump to avoid the issue that catalyzed protests — the cheap price that some police officers and society at large appear to attach to the life of black males.
The President’s blaming of Antifa suggests he has little desire to contemplate underlying causes of despair in the African-American community. Aside from the nation’s tortured legacy on race, minorities are disproportionally more affected by Covid-19, have worse health care and are more likely to have lost jobs during the pandemic. They are also more likely to have low-wage jobs that require them to be at their posts during a pandemic — for instance those who work in grocery stores.

Depending on their political leanings, and according to already entrenched views of Trump, Americans will decide for themselves his level of responsibility for the country’s current plight.

But earlier this year — even amid the partisan estrangement of impeachment — no one could have foreseen how his reelection race will now be shaped by a nation that is battling deep health, economic and social crises at the same time.

Trump’s past comments would make any unifying effort a challenge

The President is being urged by some advisers to formally address the nation and call for calm, while others have said he should condemn rioting and looting more forcefully or risk losing middle-of-the-road voters in November, according to several sources familiar with the deliberations.

Trump’s lashing out at Antifa may indicate he has chosen to follow his instincts and has chosen the latter course.

And given Trump’s uneven attempts to unite the nation in the past, he would face a huge assignment in making a meaningful impact, not to mention his habit of undermining his own scripted addresses with follow-up tweets that reignite controversy.

That dynamic was in play over the weekend after the President spoke out against the violence and promised justice would be served during remarks at the Kennedy Space Center.

“I stand before you as a friend and ally to every American seeking justice and peace. And I stand before you in firm opposition to anyone exploiting this tragedy to loot, rob, attack, and menace. Healing, not hatred; justice, not chaos are the mission at hand,” the President said.

A day later, the President was blaming Democrats and the media for inciting “hatred and anarchy” even as a number of journalists appeared to be targeted by police.

Keisha Lance Bottoms, the Democratic mayor of Atlanta, which saw serious looting and violence, said that Trump should stay silent.

On Fox News Sunday, Republican Sen. Tim Scott of South Carolina said that some of Trump’s tweets were “not constructive.” The only black Republican in the Senate, Scott said he talked with the President on Saturday and told him that it’s beneficial for him to “focus” on the death of Floyd and to “recognize the benefit of nonviolent protests.”

The death of Floyd was only the latest event in which the death of an African-American man has become a national issue. But there has been no action to address institutionalized racism in some police units or to reform a judicial system that often fails to bring the perpetrators of such incidents to justice.

But Trump’s national security adviser, Robert O’Brien, downplayed the idea that there was a wider societal deficit at play.

“I don’t think there’s systemic racism,” O’Brien told CNN’s Jake Tapper on Sunday. “I think 99.9% of our law enforcement officers are great Americans. But you know what? There are some bad apples in there. And are some bad cops that are racist. And there are cops that maybe don’t have the right training.”

While Trump’s outbursts were criticized by many Democrats and media commentators, Trump has defied conventional wisdom and presidential guardrails and profited politically before.

Playing the law-and-order card does offer Trump a chance to turn the political narrative away from his handling of the pandemic. It’s possible it could appeal to some suburban voters who fear insecurity and unrest and turned against Republican candidates in the 2018 midterm elections.

Several Democrats also accused extremists of exploiting the wave of fury after the death of Floyd to instigate violence.

The Democratic mayor of Los Angeles, Eric Garcetti, called for the continuation of peaceful protests and an end to the vandalism and violence that took over the city Saturday night.

“We saw a small group that has not just caused chaos and damage,” Garcetti said. “They are hijacking a moment and a movement and changing the conversation.”