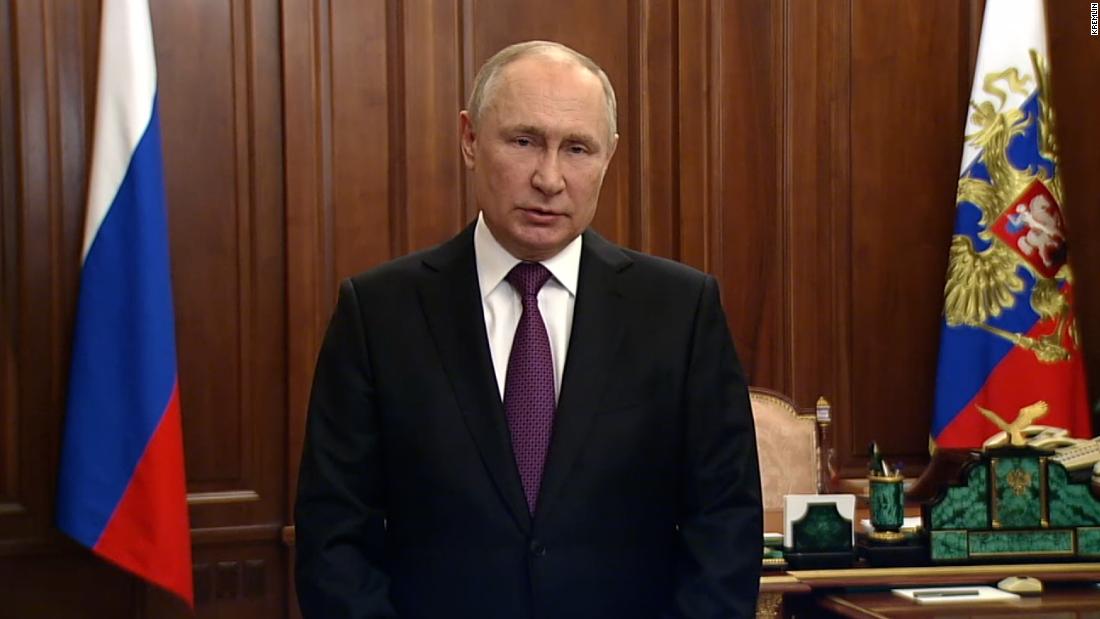 “According to the information at my disposal, Putin is moving additional forces and tanks into the occupied Donbas territories,” Latvian Prime Minister Arturs Krišjānis Kariņš said. “By any definition that’s a crossing of a sovereign territory into a neighboring country.”

Pressed specifically on whether he was referring to the entry of additional Russian troops since Moscow recognized the two separatist regions earlier this week, Kariņš replied: “Yes, according to the information at my disposal, this is exactly what we’re seeing.”

Two other sources familiar with US intelligence confirmed to CNN that additional Russian troops have in fact crossed the border into the Donbas region since Putin recognized the two regions and issued an order deploying “peacekeepers” into the Donbas on Tuesday. According to a senior US official familiar with the latest intelligence, Russia has deployed one to two so-called battalion tactical groups, Russia’s main combat formation, each of which comprise an average of about 800 troops.

CNN has not independently verified the presence of additional Russian troops in the Donbas.

The new warning from US intelligence was conveyed to Ukraine on Tuesday morning local Kyiv time, according to three of the sources. A senior Ukrainian official said Ukraine has not verified the intelligence and noted that the United States has issued similar warnings before, for assaults that ultimately did not materialize.

The US has assessed that Russia has completed all preparations for an invasion, a senior US defense official familiar with the latest intelligence. “They are as ready as they can be,” the official said.

NATO allies have been given a similar intelligence assessment warning of an imminent attack, according to a NATO military official. The official cautioned that “no one knows for sure” what Russian President Vladimir Putin is going to do.

Newsweek first reported on the US warning.

News of the warning comes as the Ukrainian president has called for a state of emergency to be imposed across the country starting at midnight tonight in Ukraine.

Of particular concern, the US warned, is the major northeastern city of Kharkiv, according to the senior Ukrainian official and a western official familiar with the intelligence. The Ukrainian foreign minister said on Tuesday there were no plans to evacuate the city,

“We do not have such plans,” he said during a press conference in Washington alongside Secretary of State Antony Blinken.

Russian military forces “arrayed around Ukraine and Belarus are as ready as they can be,” for an invasion, the official said.

Russian military capabilities along the Ukraine border are “near 100% of all forces” that the Pentagon anticipated Putin would move into the area, the official added. Putin has a “full range of capabilities” already moved to the Ukraine border, including “significant offensive missile capability,” “two dozen warships in the Black Sea” and “armor, artillery, certainly infantry,” according to the official.

Social media videos geolocated and analyzed by CNN over the past several days show a continuing buildup of armor and support vehicles less than 30 kilometers across the border in Russia.

US officials have said that they anticipate both a ground invasion and airstrikes should Russia launch an attack.

“Russian missiles and bombs will drop across Ukraine. Communications will be jammed. Cyberattacks will shut down key Ukrainian institutions,” Blinken said last week before the UN Security Council, describing how the US believed a Russian attack on Ukraine would unfold. “After that, Russian tanks and soldiers will advance on key targets that have already been identified and mapped out in detailed plans.”

President Joe Biden on Tuesday described events now underway in Ukraine as “the beginning of a Russian invasion,” but senior administration officials have since declined to confirm whether additional Russian troops had entered into the Donbas — where unmarked Russian forces have propping up separatist fighters since 2014.

The US and European allies invoked sanctions against Moscow on Tuesday in response to Putin’s moves, and the Biden administration is expected to announce Wednesday that it will allow sanctions to move forward on the company in charge of building the Nord Stream 2 gas pipeline from Russia to Germany.

Kariņš told CNN that the initial round of sanctions from the US and Europe was only the beginning of the Western response toward Moscow if Putin escalates further in Ukraine.

“I think that what we’re seeing now is the first wave of sanctions. So Putin moves military units into Ukraine, the democratic world responds immediately, within one day, and across all the time zones, with coordinated and very deep sanctions,” he said. “If there would be more moves, there would be more sanctions, and they will only be cutting deeper and deeper.”

Ukraine’s National Security and Defense Council announced Wednesday that the state of emergency would be introduced across all parts of the country under government control. The measure is expected to be approved by the Ukrainian Parliament within 48 hours and would last for 30 days, with the possibility of being extended for an additional 30 days.