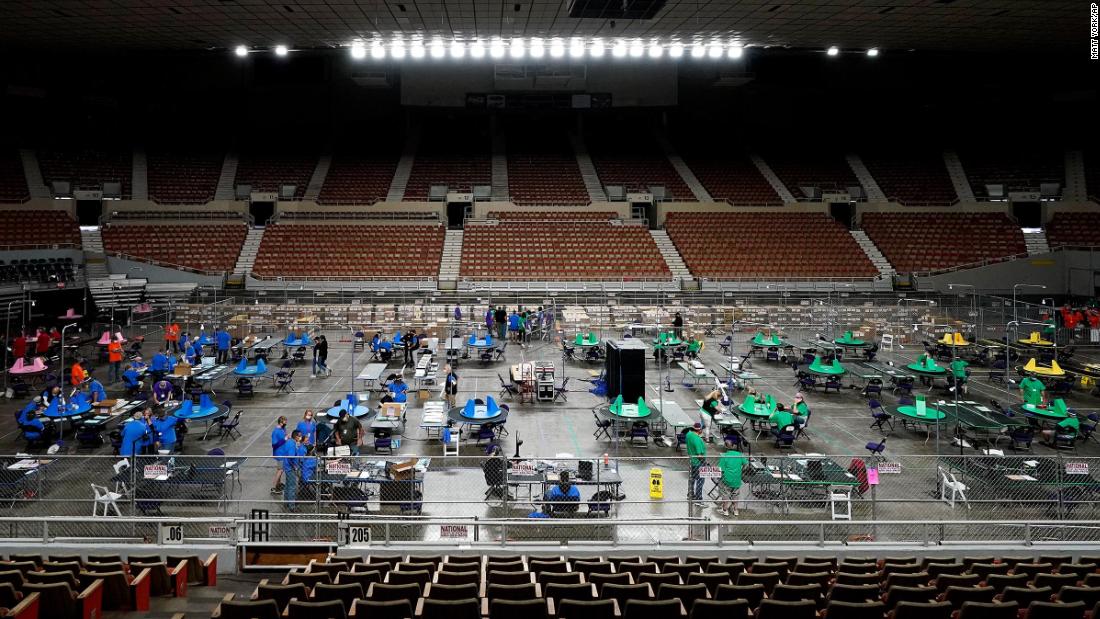 Trump lit the latest fuse Saturday — as Republican leaders of the Arizona state Senate press forward with a controversial audit conducted by Cyber Ninjas, a Florida-based consulting firm — when he falsely claimed in a statement that the “entire Database of Maricopa County in Arizona has been DELETED!”
Stephen Richer, the Maricopa County recorder — a Republican who heads the county’s election department — responded to Trump’s statement by saying on Twitter: “Wow. This is unhinged.”

“I’m literally looking at our voter registration database on my other screen. Right now,” Richer wrote. “We can’t indulge these insane lies any longer. As a party. As a state. As a country.”

He told CNN’s Erin Burnett on “OutFront” on Monday evening he was “exasperated” by Trump’s false claim and called the former President’s message “tantamount to saying the pencil sitting on my desk in front of me doesn’t exist.”

Trump’s statement amplified claims made by Arizona state Senate President Karen Fann in a letter last week that a screenshot offered evidence that election files had been deleted.

Maricopa County’s Board of Supervisors — four out of five of whom are Republicans — met Monday to respond to Fann’s allegations, with board members offering harsh condemnations of the GOP-led Senate.

Board Chairman Jack Sellers, a Republican, said the state Senate is running “a grift disguised as an audit.”

“This board is done explaining anything to these people who are playing investigator with our constituents’ ballots and equipment, paid for with real people’s tax dollars. People’s ballots and money are not make-believe,” Sellers said. “It’s time to be done with this craziness.”

During the meeting, Richer repeated his response to Fann’s claims.

“No files from the 2020 election have been deleted. We deleted zero — zero files,” he said.

The board voted unanimously to sign a letter detailing Richer’s point-by-point responses to Fann’s claims, and Sellers said they would not be participating further in the audit.

“I will not be responding to any more requests from this sham process,” Sellers said. “Finish what you call an audit and be ready to defend your report in a court of law. We all look forward to it.”

Matt Masterson, an elections cybersecurity official who served under both the Obama and Trump administrations, told CNN the screenshot looked like it was a duplicate of one of the two post-election “Logic and Accuracy” tests run by the county.

Fann’s claims were condemned last week by Sellers, who said the allegations are “false and ill-informed.”

“It’s clearer by the day: the people hired by the Senate are in way over their heads,” Sellers said. “This is not funny; this is dangerous.”

Richer also lambasted the GOP-controlled Senate’s allegations, saying: “Enough with the defamation. Enough with the unfounded allegations. I came to this office to competently, fairly, and lawfully administer the duties of the office. Not to be accused by own party of shredding ballots and deleting files for an election I didn’t run. Enough.”

In Washington, the far-right and Trump-aligned portion of the House Republican caucus was also wading into the Arizona election battle.

Reps. Marjorie Taylor Greene of Georgia and Matt Gaetz of Florida joined two Arizona congressmen, Andy Biggs and Paul Gosar, wrote a letter Monday to Pamela Karlan, a top official in the Justice Department’s Civil Rights Department who on May 5 had written a letter to Fann seeking “the steps that the Arizona Senate will take to ensure that violations of federal law do not occur.”

The four Republicans asked Karlan for “a commitment to uphold the rule of law and allow Arizona to confirm the 2020 elections were free and fair.”

They also said they wanted a response by May 20 — the day before Gaetz and Taylor Greene are set to hold an “America First” rally in Mesa, Arizona.

Late last week, semi trucks filled with 2.1 million ballots cast in Arizona in the 2020 election moved those ballots to a warehouse where they are being temporarily stored as the audit is paused because the Veteran’s Memorial Coliseum — where the audit is taking place — is hosting high school graduations this week.

State Senate officials have said the audit will resume May 24, with the goal of finishing in about 14 to 16 days, Arizona Senate liaison Ken Bennett told CNN last week.

That pace would require an exponential ramp-up and rate that so far have proved elusive to this partisan ballot count, taking place despite two audits conducted by Maricopa County showing no widespread election fraud.

“I’ve never seen anything like it,” said election technology expert Ryan Macias of the ballot review being led by Cyber Ninjas, hired by the state Senate. “They do not have auditing experience. They do not have election technology experience. The more that this (the ballots) moves in and out, the more likely the chain of custody will be broken and the less likely that the data is reliable.”

Macias is an expert in election technology who is one of the pro bono observers brought in by the Arizona secretary of state’s office to watch the Cyber Ninjas ballot count. He has been hired by both Republicans and Democrats to help safeguard dozens upon dozens of state and federal elections.

“There’s ballots; there’s people counting. But the process in which they are utilizing, at least on the counting floor, is nothing that is in an election environment,” said Macias.

This story has been updated with details from Monday’s meeting and Richer’s comments on CNN.

CORRECTION: An earlier version of this story misstated the target of the letter from House Republicans.