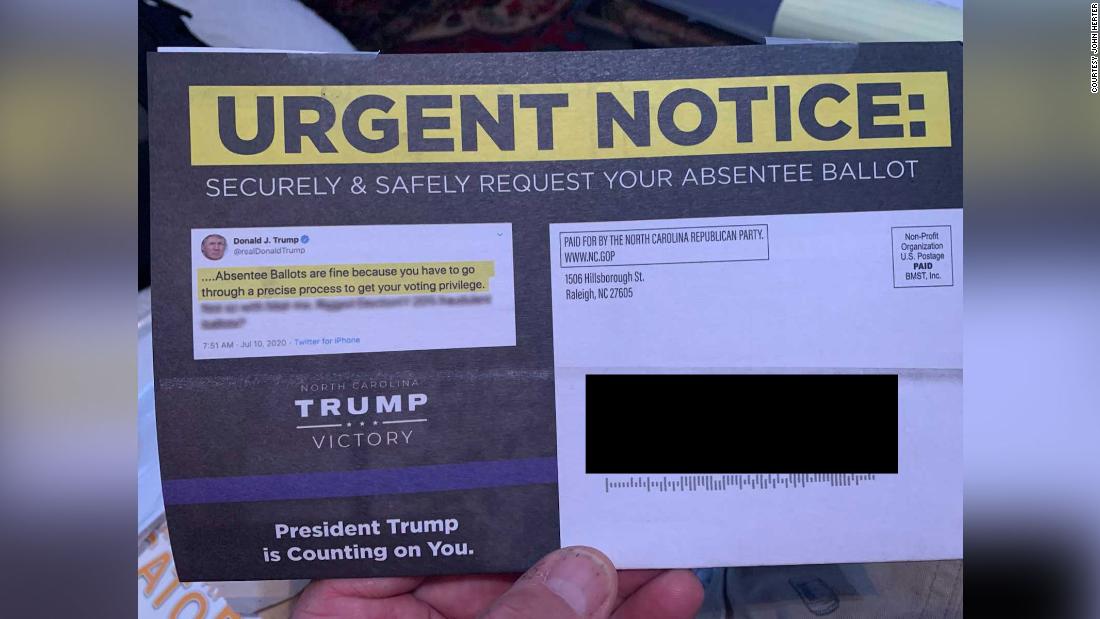 “Is this a joke?” Herter said his wife told him as she opened up the mailer to reveal a photo of Trump grinning underneath the words, “Are you going to let the Democrats silence you? Act now to stand with President Trump.”

Herter, of Lincoln County is among a group of voters in North Carolina to receive the mailer over the past few days after Trump said that he opposed crucial USPS funding because he doesn’t want to see it used for mail-in voting this November.
During an interview on Fox News last week, Trump said that if USPS does not receive the additional $25 billion funding request that Democrats included in the ongoing stimulus negotiations, then he believes the Post Office won’t be able to handle the influx of mail-in ballots in the upcoming election.
The pandemic has led to high levels of voting-by-mail, but the President has tried to restrict this method because he said it is filled with fraud and abuse, claims that CNN has fact-checked multiple times and which are largely without merit.

Trump has criticized mail-in voting for months, baselessly asserting that it will lead to voter fraud.

There is not widespread voter fraud in US elections, and nonpartisan experts say neither party automatically benefits when states expand access to mail-in voting.

This is why Chandler Carranza, of Gaston County, North Carolina, said he laughed after receiving the absentee ballot request mailer on Thursday.

“The irony is very thick and definitely not lost on me,” Carranza told CNN. “Trump has been saying mail-in ballots will bring fraud to the election but absentee ballots are legit. Which is it? It can’t be both ways. I laughed because if the campaign actually took information from other times they have reached out to me, they’d know I won’t vote for Trump despite being a registered Republican.”

The Trump campaign said the mailer shows how it “is working to ensure voters in every state know how their state’s sorting system works so that every eligible voter can cast their ballot and have their vote counted,” Thea McDonald, deputy national press secretary, told CNN over email after she was shown the mailer.

“President Trump has consistently and rightly said that where a voter cannot make it to the polls, they should request an absentee ballot,” McDonald said. “The President has also correctly distinguished between chaos-ridden universal mail-in voting systems, like the one that led to California’s train wreck primary, and traditional absentee mail voting systems, like the tried and true system in North Carolina—a distinction Democrats and many in the mainstream media purposely ignore to sow confusion.”

The mailer was sent out by the North Carolina Republican Party, press secretary Tim Wigginton told CNN. The state party has sent several statewide mailers “to make it easier for interested voters to participate,” Wigginton said.

“We want our voters to know they can utilize this tool to cast their ballot in an easy, safe and secure manner. It is important to note that the North Carolina system requires a voter to actively solicit a ballot and go through an easy but important verification process to request a ballot,” he added. “We along with President Trump oppose an all-mail election process where voters are mailed ballots without a prior request and authentication.”

The USPS has come under criticism recently. Newly released letters from the USPS have warned nearly every state that slowdowns in delivery could cause ballots to show up late and not be counted. CNN and other news organizations also reported that in the last week that USPS has removed letter collection boxes in at least four states: New York, Oregon, Montana and Indiana.

The USPS announced Sunday it would stop removing postal collection boxes through late November following complaints about how some had been taken away.

House Democrats said Sunday they are “ramping up” their investigation of the United States Postal Service and as Democratic leaders, including House Speaker Nancy Pelosi and Senate Minority Leader Chuck Schumer, called on Postmaster General Louis DeJoy and Chairman of the Postal Service Board of Governors Robert Duncan to testify.

Possible action by the House could include forbidding the Postal Service to change sorting devices, prevent the closure of facilities, stopping any effort to end overtime pay or changing the timing of mail delivery, one of the sources said. Democrats also may push language requiring all ballot deliveries to have first class status.

While it is common for candidates and political parties to send mail to voters, especially those who don’t have access to TV or the internet, Real Facts NC, a non-profit dedicated to researching and telling the stories about issues facing North Carolinians, has never seen a mailer like this before, messaging director Jazmynne Williams told CNN.

One voter concerned over the problems facing the USPS is Taylor Alexander, of Wake County, North Carolina. She received the absentee ballot request form on Wednesday.

“My initial reaction was that I was kind of shocked, and laughed because of the irony of it, because Trump had been railing against mail-in voting, but here his party was, promoting it, and sending out an absentee ballot request form,” Alexander said. “I think it’s ridiculous that the funding is being cut and processes are being changed in the post office. People’s life saving medication are days late, bills aren’t being paid on time, and all for what? It’s rigging the election.”