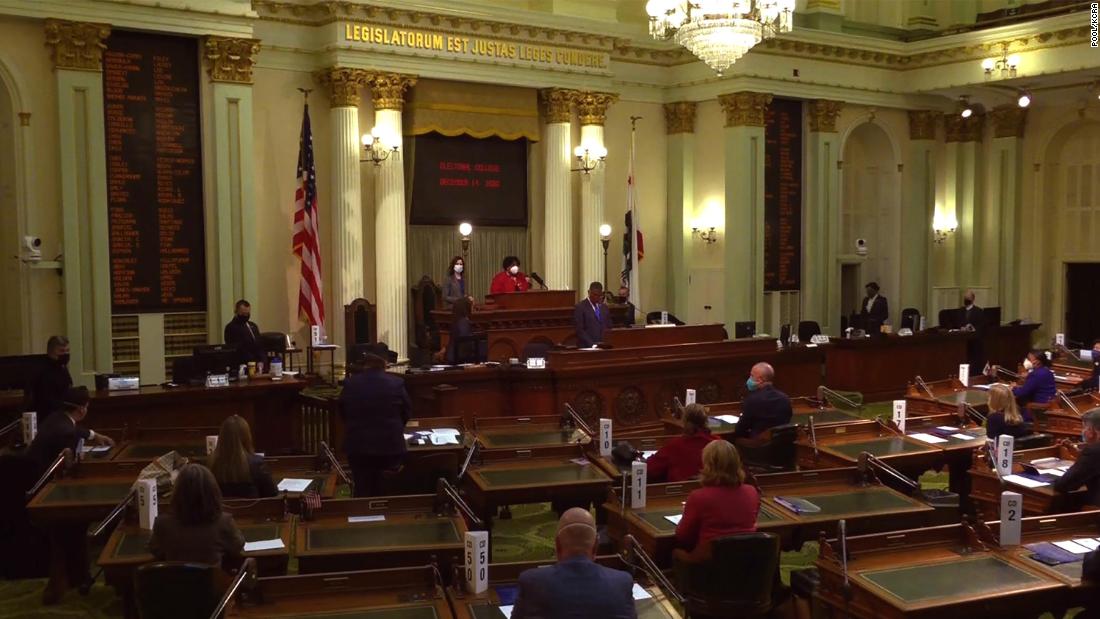 Yet all the battleground states that Trump has sought to overturn — Nevada, Georgia, Pennsylvania, Arizona, Michigan and Wisconsin — cast their electoral votes for Biden.

The voting kicked off shortly after 10 a.m. ET with Vermont’s three electors casting the first votes for Biden and continued throughout the day. All of the votes went as expected — no states had any so-called “faithless electors” break from the state’s popular vote.

The Electoral College votes will next be sent to Congress to be counted formally next month. A group of House Republicans have signaled they will object to the results in the key states, but they can do little more than delay the process during the joint session of Congress on January 6.

Trump has continued to spread false claims of widespread fraud despite courts in all of the battleground states rejecting his campaign’s challenges to the election. The Supreme Court dealt the final blow against his efforts to overturn the election result late Friday, dismissing a case brought by the Texas attorney general that sought to disenfranchise millions of voters in four states.

Wisconsin’s Supreme Court denied yet another challenge from Trump’s campaign on Monday, just before the state’s electors were scheduled to meet and cast their votes for Biden.

Biden is scheduled to deliver a speech Monday evening after the Electoral College finishes voting in which he’s expected to say that “democracy prevailed.”

“We the People voted. Faith in our institutions held. The integrity of our elections remains intact,” Biden is expected to say, according to excerpts released by the transition team. “And so, now it is time to turn the page. To unite. To heal.”

Trump’s baseless attacks on the election result — and the widespread support of Trump’s efforts from Republican leaders in Congress — prompted a retiring congressman to leave the Republican Party and become an independent. Michigan Rep. Paul Mitchell, who didn’t run for reelection, wrote to House Minority Leader Kevin McCarthy and Republican National Committee Chairwoman Ronna McDaniel on Monday to say he was withdrawing from the party.

“This party has to stand up for democracy first, for our Constitution first, and not political considerations,” Mitchell told CNN’s Jake Tapper Monday. “Not to protect a candidate. Not simply for raw political power, and that’s what I feel is going on and I’ve had enough.”

In Congress, most Republicans have declined to say that Biden is the President-elect, despite a decisive Electoral College victory and baseless claims of voter fraud being thrown out repeatedly in the courts. A majority of House Republicans, including McCarthy, signed onto the Texas lawsuit seeking to overturn the results in four states.

“I think he’s President-elect subject to whatever additional litigation is ongoing,” Cornyn said, adding it would be a “bad mistake” for House Republicans to object to the results of the Electoral College vote.

Senate Majority Whip John Thune, a South Dakota Republican, said Monday that Biden is President-elect once he crosses 270 electoral votes. “Once the Electoral College settles the issue today, it’s time for everybody to move on,” Thune said.

While Trump has directed most of his Twitter ire at the courts and the GOP state officials who have properly certified their states’ election results for Biden, he turned his attention to the Electoral College vote on Sunday evening with even more false claims. He’s now likely to focus on the upcoming vote counting in Congress. In a Fox News interview over the weekend, Trump claimed “it’s not over” and vowed to keep fighting to stay in office.

Minutes after California affirmed Biden’s win with its vote, Trump tweeted that Attorney General William Barr would be leaving the Trump administration later this month.

Trump’s relationship with Barr has soured since the attorney general said after the election that the Justice Department had not uncovered evidence of widespread voter fraud and that the DOJ under Barr did not disclose an ongoing investigation during the election into Biden’s son, Hunter Biden, following Justice Department protocol. Joe biden is not implicated.

Trump and his allies have suggested state legislatures should try to put forward alternate slates of electors that would go against the votes in their states.

No state legislature did so on Monday. But Republicans who had been named as electors for Trump in Pennsylvania, Georgia, Arizona and Wisconsin nevertheless met separately to cast symbolic votes for the President on Monday. Those votes have no validity under federal law, but GOP officials in the states said the Trump electors met because there are still ongoing legal challenges.

The heightened attention on today’s Electoral College voting has prompted several states to put in place security protocols due to concerns over safety, threats and protests.

In Arizona, the electors met at an undisclosed location, according to the public information office for the Secretary of State. And in Wisconsin, electors were told to use an unmarked entrance with police escort, according to one of the electors.

“For elections officials in Arizona, this is the final step in our process. And one that is usually conducted with much pomp and circumstance, with the reverence it deserves for its place in history,” Arizona Secretary of State Katie Hobbs, a Democrat, said during the state’s gathering. “But this year’s proceeding, which occurs only once every four years, has unfortunately had an artificial shadow cast over it in the form of baseless accusations of misconduct and fraud, for which no proof has been provided, and which court after court has dismissed as unfounded. And this fabrication of misdeed, leveled against everyone from poll workers to me and my office, has led to threats of violence against me, my office, and those in this room today.”

The Michigan House and Senate offices were closed to the public Monday after “credible threats of violence” as the state’s 16 electors prepare to cast their votes for president and vice president, a spokeswoman told CNN.

A Michigan House Republican was stripped of his committee assignments for the rest of the term after inciting violence around protests expected later Monday in Lansing. Michigan House Speaker Lee Chatfield, a Republican, and Speaker-elect Jason Wentworth released a statement on Monday condemning the comments of House Republican Rep. Gary Eisen, who said in a radio interview that he could not offer assurances there wouldn’t be violence on Monday.

Eisen, one of the Michigan lawmakers to support the Texas attorney general lawsuit that was dismissed by the Supreme Court, would not give details about the events unfolding in Lansing beyond saying, “It’s going to be violence, it’s going to be protests.”

In a statement, Chatfield said the state will not change electors to give Trump the win, because doing so would “bring mutually assured destruction for every future election in regards to the Electoral College.”

“I fear we’d lose our country forever” should Republicans switch the slate of electors, Chatfield added.

“I fought hard for President Trump,” he wrote. “Nobody wanted him to win more than me. I think he’s done an incredible job. But I love our republic, too. I can’t fathom risking our norms, traditions and institutions to pass a resolution retroactively changing the electors for Trump, simply because some think there may have been enough widespread fraud to give him the win.”

Monday’s Electoral College vote is not the final step in the constitutional process of selecting a president. The votes cast on Monday are sent to Congress, where they will be counted on January 6 in a joint session led by Vice President Mike Pence.

Some of Trump’s staunchest House Republican allies are preparing for a floor fight when the votes are counted in Congress next month.

Lawmakers can dispute a state’s election result when the votes are counted next month. But a challenge can only be considered if both a House member and a senator sign onto it. So far only House Republicans have said they will contest the results, although some GOP senators have suggested they are considering joining.

Even if a senator signs on to challenge the results, it’s only delaying the inevitable. In that case, the House and Senate separately debate the matter for two hours and vote on it. Democrats control the House, and enough GOP senators have already said they reject Trump’s claims of fraud that a challenge would not succeed there either.

After the state electors cast their ballots on Monday, those results will be certified and sent to Congress, the National Archives and to the courts.

The states’ electors are meeting throughout the day, as each state sets its own rules for how electors meet and vote. At least one state — Nevada — met virtually due to the pandemic.

Electors are picked by the state parties before the November election. Federal lawmakers are not allowed to be electors, but the slates usually include local officials and party alumni. In New York, for instance, former President Bill Clinton and former Secretary of State Hillary Clinton cast electoral votes for Biden.

In Florida, Republican state Senate President Wilton Simpson, who was a state elector, tested positive for Covid-19 on Sunday night. As a result, Simpson is not participating in the Electoral College vote Monday and an alternate will take his place when the states’ electors cast their ballots for Trump.

One of Michigan’s 16 electors was not in attendance for the vote, so electors voted on a replacement to fill the vacancy prior to casting their vote for Biden.