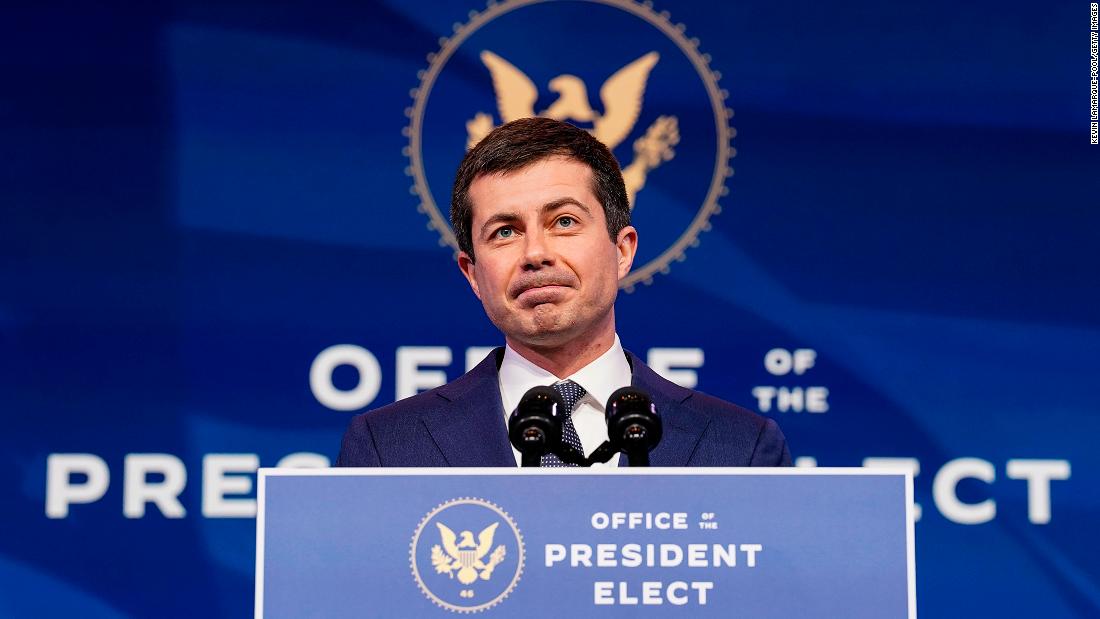 If confirmed by the US Senate, Buttigieg would be the first out LGBTQ Cabinet secretary approved by the chamber.

Buttigieg said he remembered watching as a teenager when James Hormel was attacked and denied a vote in the Senate to serve as President Bill Clinton’s ambassador to Luxembourg because he was gay. (Clinton ended up appointing Hormel through a recess appointment.)

“At the time, I had no aspirations of being appointed by a president to anything. At that age, I was hoping to be an airline pilot, and I was a long way from coming out even to myself. But still, I watched that story and I learned something about some of the limits that exist in this country when it comes to who was allowed to belong,” Buttigieg said at an event in Wilmington, Delaware, during which the President-elect introduced him as his nominee for the post.

Buttigieg continued, “Two decades later, I can’t help but think of a 17-year-old somewhere who might be watching us right now, somebody who wonders whether and where they belong in the world, or even in their own family. And I’m thinking about the message that today’s announcement is sending to them.”

Buttigieg, 38, is also the youngest member named so far in Biden’s Cabinet, and is the only one of Biden’s former Democratic presidential opponents to be named as a Cabinet secretary nominee.

The role of transportation secretary is expected to play a central part in Biden’s push for a bipartisan infrastructure package.

Biden spoke on Wednesday about how the United States lags behind other nations in terms of infrastructure quality, and his plans to create jobs and rebuild crumbling roads and bridges. He stressed the intersection with his climate plan, and how he plans to revitalize the economy while turning the country toward electric vehicles and reducing energy consumption.

“We selected Pete for transportation because it is the intersection of some of the most ambitious plans to build back better,” Biden said.

He praised Buttigieg as “one of the smartest people you’ll ever meet and one of the most humble.”

“A mayor from the heartland, a management expert, a policy wonk with a big heart, a veteran, lieutenant in the United States Navy Reserve, an intelligence officer deployed to Afghanistan while he was mayor. A new voice with new ideas, determined to move past old politics,” Biden said.

Buttigieg drew on his experience serving as mayor and his work spearheading a number of infrastructure projects in South Bend. He said among those projects was developing “new forms of support for lower wage workers in their commutes” and adding “electric vehicle charging infrastructure to help prepare for a more sustainable future.”

Buttigieg spoke about what he described as his own “personal love of transportation, ever since childhood.” He said he would convince friends to travel nearly 1,000 miles back to Indiana with him on the Amtrak.

“Though I know that in this administration I will at best aspire to be the second biggest train enthusiast around,” Buttigieg said with a smile, looking back at Biden, who famously took roughly 8,000 round trips on the Amtrak during his time as senator and vice president, earning him the moniker “Amtrak Joe.”

Buttigieg noted that he also proposed to his now-husband at an airport terminal. “Don’t let anybody tell you that O’Hare (International Airport) isn’t romantic,” he joked.

She described him as a “trailblazing leader from the industrial Midwest,” and a “veteran and a dedicated public servant who represents the very best of our country and the next generation of American leadership.”

“We will transform our roads and bridges, transit systems, railways, ports and airports, while powering them with clean energy. Spark a renaissance in American passenger rail that will not only connect our country, but unlock job creation and growth across our manufacturing sector,” Harris said.

The vice president-elect continued, “And we will expand and upgrade our transportation system in a way that is equitable, serving communities of every size, urban and rural, across our country.”

Buttigieg asked former Secretary of State Hillary Clinton for her advice on being part a President’s Cabinet on his podcast, “The Deciding Decade.”

“First and foremost, you’ve got to demonstrate, in any of these Cabinet positions, that you’re going to be a good steward, you’re going to lead and manage a diverse, complicated department and you’re going to be really grounded, literally, in what it’s going to take to get results,” Clinton said on the podcast, which was released Wednesday morning.

Clinton advised Buttigieg to immerse himself in the policy — “You have to do the work” — and set goals in line with Biden’s vision for the department.

“You have to be part of the overall administration approach to climate change,” Clinton said. The 2016 Democratic presidential nominee also noted part of Buttigieg’s role will be to restore the public’s confidence in using public transportation after the pandemic.

During his tenure as mayor, Buttigieg in 2014 deployed to Afghanistan as an intelligence officer.

After returning from his deployment in 2015, Buttigieg came out as gay in an essay for the South Bend Tribune while serving as mayor. Later that year, Buttigieg won reelection.

Prior to running for office, Buttigieg was a consultant at McKinsey & Company in Chicago.