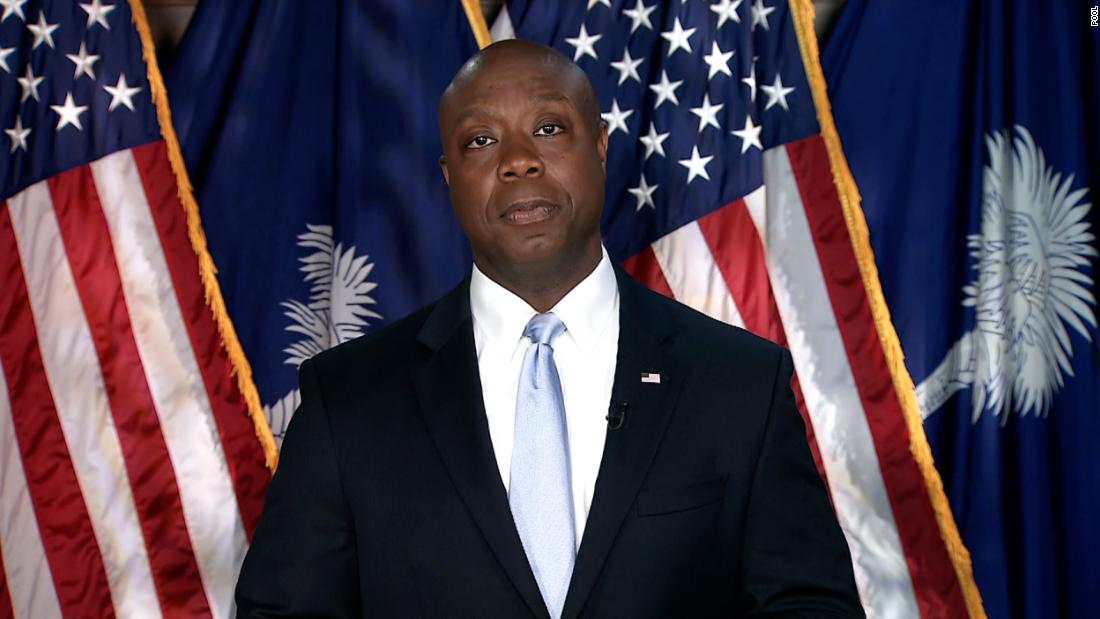 “President Biden promised you a specific kind of leadership,” Scott said in his remarks. “He promised to unite a nation, to lower the temperature, to govern for all Americans no matter how we voted.”

While rebuttals typically offer the opposing party a chance to critique the President’s message, Scott’s speech directly called out Biden and his party, as the Republican senator touched on a wide range of issues, offering up praise for the Trump administration and slamming Democrats as divisive.

“Our nation is starving for more than empty platitudes,” he said. “We need policies and progress that bring us closer together. But three months in, the actions of the President and his party are pulling us further and further apart.”

Scott, the only Black Republican in the Senate, was selected by his party’s leadership to deliver their response, giving him a prominent national platform to speak to the country and the opportunity to draw a contrast between the GOP and Biden’s agenda.

‘America is not a racist country’

Scott waded into an array of hot-button policy debates and issues, including infrastructure, voting rights, policing reform and racism and discrimination, saying at one point that “America is not a racist country.”

“I’m an African American who has voted in the South my entire life. I take voting rights personally,” he said, offering a defense of Republicans who pushed through changes to Georgia’s election laws that impose significant new obstacles to voting and gives the Republican-controlled state government new power to assert control over the conduct of elections. 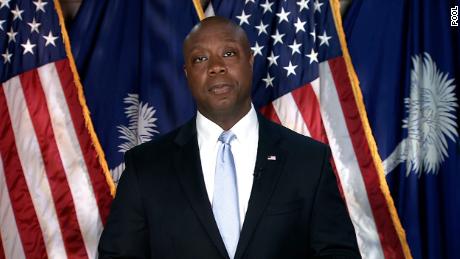 “Republicans support making it easier to vote and harder to cheat,” Scott said.

Scott used his remarks to speak in deeply personal terms during the speech, saying, “I have experienced the pain of discrimination,” though he cited his experience as a critique of left-leaning politics.

“I get called ‘Uncle Tom’ and the N-word — by progressives, by liberals,” he said, “Believe me, I know firsthand our healing is not finished.”

In his remarks, Scott criticized higher education institutions as well as businesses for “doubling down on the divisions we’ve worked so hard to heal” and profiting off of racial politics.

“From colleges to corporations to our culture, people are making money and gaining power by pretending we haven’t made any progress at all,” he said.

Later he added, “You know this stuff is wrong. Hear me clearly: America is not a racist country.”

Scott credited the Trump administration with the development of effective vaccines to address Covid-19 and cited school closures during the pandemic as a key issue.

“The coronavirus is on the run. Thanks to Operation Warp Speed and the Trump administration, our country is flooded with safe and effective vaccines. Thanks to our bipartisan work last year, job openings are rebounding,” he said. “So why do we feel so divided and anxious?”

He criticized school closures, a hot-button issue amid the ongoing pandemic.

“Locking vulnerable kids out of the classroom is locking adults out of their future,” he said. “Our public schools should have reopened months ago. Other countries did. Private and religious schools did. Science has shown for months that schools are safe.”

Scott also slammed Biden’s sweeping infrastructure push, saying that Republicans are ready and willing to work to advance traditional infrastructure priorities, but that Democrats “won’t even build bridges to build bridges” and instead are trying to jam through a liberal wish list of unrelated agenda items.

Scott at the center of policing overhaul talks

The Republican rebuttal comes as Scott has been seen as a key negotiator on Capitol Hill, known for working across the aisle and being praised by Democrats.

Scott has served in the Senate since 2013 and previously served in the House of Representatives representing his state’s 1st Congressional District.

In the wake of George Floyd’s death last year, he drafted legislation aimed at overhauling policing, an effort that ultimately failed on the Senate floor. Now he’s at the center of a new bipartisan effort.

Scott’s discussions over a bipartisan Senate bill overhauling policing with Democratic Sen. Cory Booker of New Jersey and Democratic Rep. Karen Bass of California, the author of the House-passed George Floyd Justice in Policing Act, have intensified in recent weeks.

Their goal remains crafting a compromise bill, according to a source familiar with the talks.

During his speech Wednesday, Scott said, “In 2015, after the shooting of Walter Scott, I wrote a bill to fund body cameras. Last year, after the deaths of Breonna Taylor and George Floyd, I built an even bigger police reform proposal. But my Democratic colleagues blocked it.”

“I extended an olive branch. I offered amendments. But Democrats used the filibuster to block the debate from even happening. My friends across the aisle seemed to want the issue more than they wanted a solution,” he lamented.

“But I’m still working. I’m hopeful that this will be different,” he said.

A new political environment in a non-election year and an increasing sense of urgency spurred by a number of police shooting deaths across the country have given this effort a better chance of bipartisan success. But key sticking points remain — a challenge that will put the ability of the lead negotiators to forge compromise to the test.

This story and headline have been updated with additional developments Wednesday.