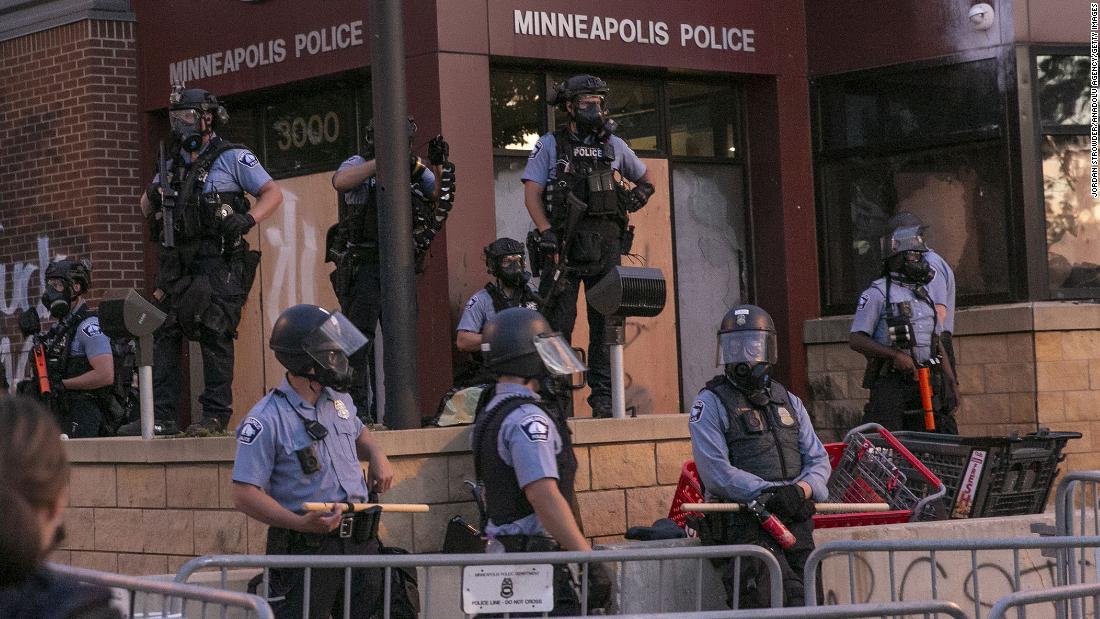 Council President Lisa Bender told CNN that with the nine votes the city council members would have a veto-proof majority of the council’s 13 members.

Sunday’s pledge was an acknowledgment that the current system is not working, Bender said.

“(We need) to listen, especially to our black leaders, to our communities of color, for whom policing is not working and to really let the solutions lie in our community,” she said.

Pressed for details on what the dismantling might look like, Bender told CNN she was looking to shift police funding toward community-based strategies and that the city council would discuss how to replace the current police department.

“The idea of having no police department is certainly not in the short term,” she added.

Bender and other council members analyzed the nature of 911 calls by constituents, she said, and found most were for mental health services, health and EMT and fire services.

The nine council members made the announcement at a community rally in Minneapolis. News of the announcement was first reported by The Appeal.
Calls by some to defund or outright abolish police departments have grown in the wake of Floyd’s death and nationwide protests against police brutality.
City council members had previously said they would take steps to dismantle the police department, including Bender, who tweeted earlier this week, “Yes. We are going to dismantle the Minneapolis Police Department and replace it with a transformative new model of public safety.” 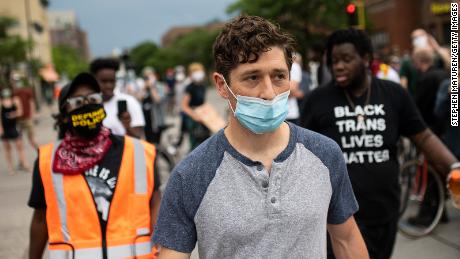 Jeremiah Ellison, city councilman for Ward 5, tweeted a similar message Thursday, writing, “We are going to dismantle the Minneapolis Police Department. And when we’re done, we’re not simply gonna glue it back together. We are going to dramatically rethink how we approach public safety and emergency response.”

Minneapolis Mayor Jacob Frey was booed by protesters Saturday night when he refused to commit to defunding and abolishing the city’s police force.

A spokesperson for the mayor said in a statement that he is “unwavering in his commitment to working with Chief (Medaria) Arradondo toward deep structural reforms and uprooting systemic racism.”

The city council’s announcement came as protests stretched into their thirteenth day.

On Sunday afternoon a crowd of protesters in Washington marched from DuPont Circle to the stretch of 16th Street that now bears a massive mural declaring, “Black Lives Matter.” There, protesters participated in a lie-in while chanting, “I can’t breathe” — echoing the words of Floyd as a Minneapolis police officer knelt on his neck.

Protesters in Southern California, many of them Latino, planned to caravan from Compton to the Los Angeles Police Department’s headquarters. An organizer said the demonstration was meant to be inclusive and socially distant, in light of the coronavirus pandemic.

“Covid-19 is real,” organizer Ron Gochez told CNN. “We wanted people to be careful. That’s why this is another way we can show our solidarity with the black community and the movement against police terrorism.”

The damage and looting that overshadowed the earlier days of unrest have mostly subsided and some cities have done away with curfews, including New York.

Saturday’s protests drew some of the largest crowds since the demonstrations began — especially in Washington, DC. But chants of “Black Lives Matter” were not only heard in US this weekend, but in cities around the globe, including in France, Germany, England, Australia and Canada.

Despite experts’ concerns about coronavirus spread, the peaceful crowds decrying police brutality and demanding both justice for George Floyd and sweeping changes within the country’s policing systems continue to swell in size.

As the protests enter day 13, some cities have begun rolling out new rules for officers or plans of reform, prompted by both the demonstrations and the violent police response they’ve been met with, including tear gas and rubber bullets.

Police forces all over the US have come under fire for their use of excessive force during the protests — the very thing demonstrators say they are speaking out against.

Mayor de Blasio said Sunday that two NYPD officers were suspended without pay due to their actions while policing protesters. One was accused of shoving a woman to the ground in Brooklyn last Friday, while the other was accused of pulling down a protester’s face covering and spraying the protester with pepper spray.

Both officers face further disciplinary action, de Blasio said. Additionally, a supervisor in charge of the officer who pushed the woman has been reassigned.

In just a week, footage showed police in Buffalo, New York, push an elderly protester to the ground, causing him to bleed from the head. In Fort Lauderdale, Florida, an officer was placed on administrative leave after shoving a kneeling protester during a demonstration. And in Kansas City, Missouri, footage shows officers using pepper spray and restraining a man who was yelling about police using excessive force. 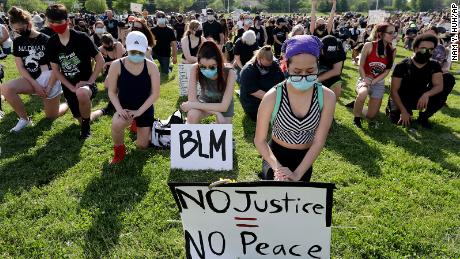 On Saturday, Portland Mayor Ted Wheeler directed the city’s police chief to stop using tear gas to disperse crowds “unless there is a serious and immediate threat to life safety, and there is no other viable alternative for dispersal.”

“I stand in solidarity with our non-violent demonstrators, who are sending a strong message that we are long overdue for meaningful reform and restorative justice,” the mayor tweeted.

Portland is the latest US city to move away from the tactic.

The Seattle police chief said Friday she suspended the department’s use of tear gas for crowd management for at least the next month. And in Denver, a federal judge granted a temporary restraining order prohibiting the use of “chemical weapons or projectiles of any kind” against peaceful protesters.

The order comes after four Denver residents who participated in demonstrations filed a complaint Thursday challenging the department’s use of chemical agents and rubber projectiles during protests.

President Donald Trump on Sunday tweeted that he had ordered the National Guard to withdraw from the nation’s capital following days of peaceful protests. Around 5,000 troops were sought to patrol Washington, approximately 3,900 of which were from out of state.

Trump did not specify whether all forces would be withdrawn or just those from out-of-state.

Similar steps were taken in Los Angeles. According to a senior law enforcement official, the city will see dramatically less of a National Guard presence on the streets.

“You are not going to see the National Guard on the street,” the official said. “But they remain here on standby and are ready to be deployed.”

Floyd remembered near his birthplace

A public viewing for Floyd is set to take place in Houston on Monday. Floyd’s body arrived in the city Saturday night, according to a statement from the public relations firm handling the memorial.

A private memorial and burial will take place Tuesday. Floyd will be buried next to his mother, the statement said. Floyd he cried out for her as a Minneapolis police officer knelt on his neck.

Ahead of Floyd’s memorial in Houston, hundreds lined up for a public viewing Saturday of Floyd’s casket in Raeford, North Carolina — about 20 miles from where he was born. 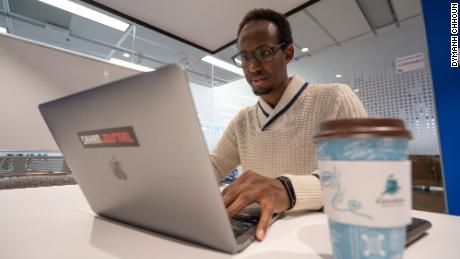 Floyd died last month after pleading for his life as ex-Minneapolis officer Derek Chauvin pressed his knee on the man’s neck.

Chauvin is expected to make an appearance in court in Minneapolis on Monday.

In a packed memorial for Floyd on Saturday, Rev. Christopher D. Stackhouse recounted the protests all over the country and said it was “Floyd who sparked the fuse that is going to change this nation.”