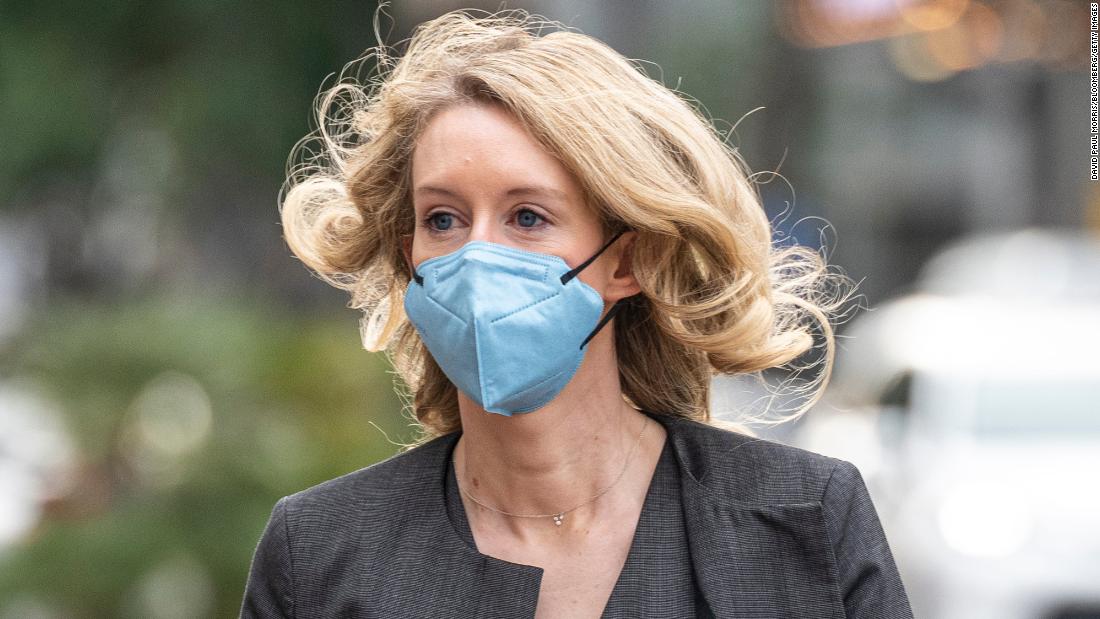 Holmes faces up to 20 years in prison as well as a fine of $250,000 plus restitution for each count of wire fraud and each conspiracy count.

Hours later, the jury returned another note that indicated it remained unable to reach a verdict on those counts.

After reading the note aloud, the Judge brought the jury into the courtroom. He questioned the jurors on whether more deliberations would help return a unanimous verdict, to which no jurors raised their hands to indicate that would be the case. He sent them back to deliberations room to complete verdict form.

Holmes, who claimed to have revolutionized blood testing, faced nine counts of federal wire fraud and two counts of conspiracy to commit wire fraud over allegations she intentionally lied to investors, doctors and patients about her company’s blood testing capabilities to take their money and prop up her company.

The verdict comes after a lengthy trial that kicked off last fall at a federal courthouse in San Jose presided over by Judge Edward Davila. While Holmes, 37, was first indicted more than three years ago, her trial was delayed by the pandemic and the birth of her child.

Elizabeth Holmes is kissed on her head by her father in federal court in San Jose, California, on January 3, 2022.

The trial, which spanned three months before it headed to the jury, has drawn significant interest given Holmes’ celebrity during her heyday and as a rare criminal fraud trial of a Silicon Valley entrepreneur.

Holmes started Theranos in 2003 at age 19 and soon thereafter dropped out of her sophomore year at Stanford to pursue the effort full-force. After a decade of operating under the radar, Theranos began publicly touting its ability to test for conditions like cancer and diabetes with just a few drops of blood taken by a finger prick and announced a retail partnership with Walgreens.

Many bought into the promise: Theranos raked in $945 million from high-profile individuals who invested in Theranos, including media mogul Rupert Murdoch, Oracle founder Larry Ellison, Walmart’s Walton family and the billionaire family of former Secretary of Education Betsy DeVos. That valued Theranos at $9 billion, making Holmes, for a time, a paper billionaire. But, the dominoes started to fall after a Wall Street Journal investigation in 2015 revealed the company was only using its proprietary technology for around a dozen of the hundreds of tests it was offering, and with questionable accuracy.

Jurors heard from 32 witnesses throughout the course of the case. The prosecution called 29 witnesses, including ex-Theranos employees, retail executives and a former US Defense Secretary as it attempted to weave together the complicated web of alleged deception that it says Holmes engaged in to allegedly defraud investors and patients. The prosecution aimed to plot out what Holmes knew about her company’s technology and its failings, when she knew it and that she intended to mislead in spite of that knowledge.

The defense’s case, meanwhile, largely hinged on testimony from Holmes herself.

Testifying for roughly 24 hours across seven court days, Holmes acknowledged that Theranos’ devices were only ever used to conduct a dozen tests on patients but provided her side of the story as to why and didn’t concede it was due to any technological failings. She acknowledged some of the government’s other key points but portrayed herself as a true believer in the company’s capabilities and mission. While she expressed some contrition during her time on the stand, she denied ever intending to deceive — a key sticking point that the prosecution must convince jurors of in order to convict Holmes.

Holmes pointed the finger at others, doing so largely at her ex-boyfriend, Theranos’ former president and chief operating officer Ramesh “Sunny” Balwani who oversaw some key areas at issue to the charges such as the company’s clinical lab. (Balwani faces the same charges as Holmes and is set to be tried early this year. He has pleaded not guilty.)

Growing emotional on the stand, Holmes alleged that she was the victim of a decade-long abusive relationship with Balwani. While denying that Balwani controlled her statements to investors and others, she also claimed that Balwani sought to control nearly every aspect of her life. Balwani previously denied the abuse allegations in court filings.

Holmes testified that while she wasn’t aware of everything that happened at the company, she “never” took any steps to try to mislead investors.

Asked whether she ever led patients to believe Theranos could offer accurate and reliable blood tests while knowing it could not? Holmes testified: “Of course not.”

Rishi Iyengar contributed to this story.