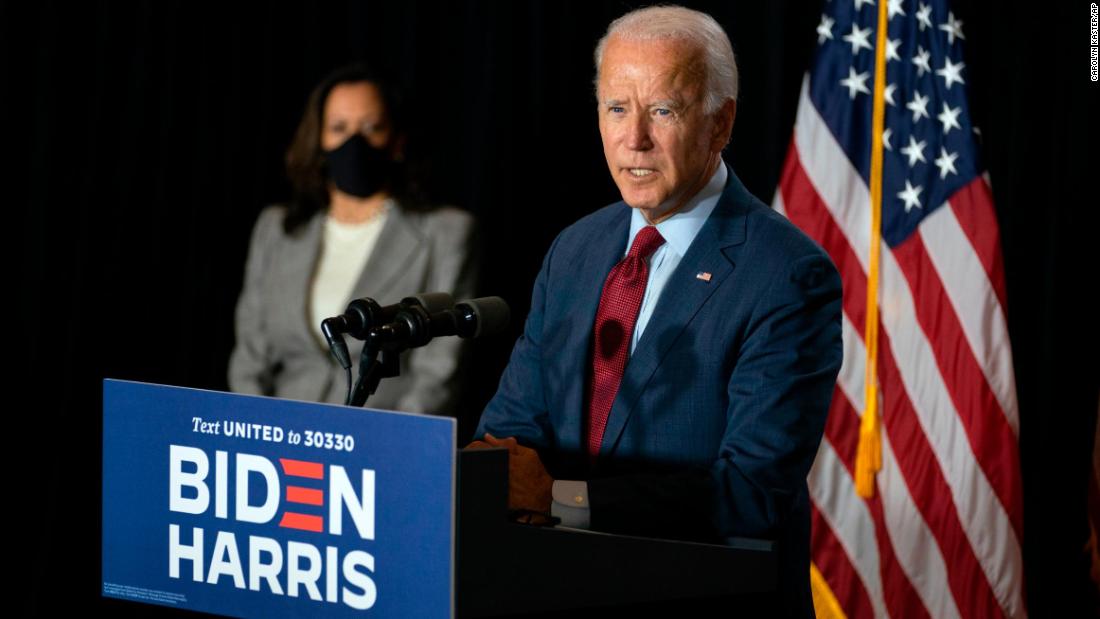 “Every single American should be wearing a mask when they’re outside for the next three months as a minimum,” the former vice president told reporters after he and his running mate, California Sen. Kamala Harris, received a briefing on the pandemic from public health experts.

Wearing masks, he said, “is going to get our kids back to school sooner and safer” and would “get our businesses back long-term.”

“Look, this is America. Be a patriot,” Biden said in a message directed at those resistant to wearing masks. “Protect your fellow citizens. Step up. Do the right thing.”

Biden and Harris appeared in person Thursday for the second consecutive day after Biden selected the California senator as his running mate on Tuesday. They did not take questions from reporters after their remarks.

In Wilmington, Delaware, the two received a briefing from a panel of public health experts assembled by Biden’s campaign. Biden has for months been receiving private briefings from a group of health experts who are advising his campaign on pandemic policies, as well as whether and how the former vice president can hold in-person events.

Biden said the briefing focused on how to open schools, how a vaccine would be distributed once one is available; the racial disparities in how the coronavirus pandemic has spread; and the continued need for protective health equipment.

Harris also touted Biden’s proposals to hire 100,000 people for a national contact tracing effort, as well as $25 billion for manufacturing and distributing a vaccine.

She said Biden exhibited “real leadership” in calling for a mask mandate, saying he is willing “to speak up, sometimes telling us the stuff that we don’t necessarily want to hear, but that we need to know.”

Their coronavirus-focused comments came the day after Biden and Harris used speeches Wednesday to hammer President Donald Trump over his handling of the pandemic.

Harris contrasted the coronavirus pandemic, which has left more than 166,000 Americans dead and caused more than 5 million cases in the United States, with Ebola during former President Barack Obama and Biden’s administration, which resulted in two deaths.

“This is what happens when we elect a guy who just isn’t up for the job,” Harris said. “Our country ends in tatters and so does our reputation around the world.”

Biden has long called for Trump to drastically escalate the production of protective medical equipment by invoking the Defense Production Act. He has also said he would rapidly expand coronavirus testing and supplies, and make all coronavirus-related medical care free.

Biden’s campaign is seeking to capitalize on the burst of attention and interest around Harris’ selection as his running mate. His campaign said it raised a combined $34.2 million on Tuesday, the day Harris was selected, and Wednesday, when the two held their first grassroots fundraiser together.

Their focus on the coronavirus pandemic Thursday comes as talks in Washington over a major economic relief package stalled. Trump’s handling of the pandemic is certain to be a focal point of the Democratic National Convention, a virtual event which will take place next week through a series of speeches delivered from across the country — including Biden and Harris speaking from the Chase Center in Wilmington.

Before the Thursday briefing, Biden also criticized Trump for seeking to cut funding for the US Postal Service in an effort to stymie mail-in voting in November’s general election.