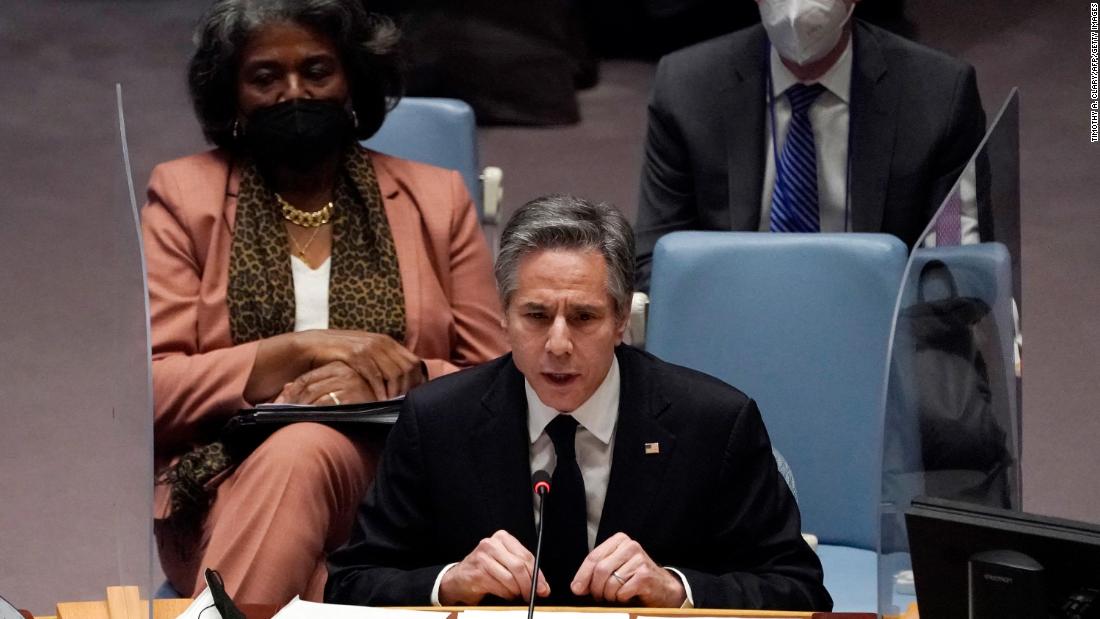 Blinken changed his travel plans so he could speak Thursday’s UN meeting, where the top US diplomat said he was detailing US intelligence about Russia’s attempts to fabricate a pretext for an invasion in an attempt to “influence Russia to abandon the path of war and choose a different path while there’s still time.”

“I am here today not to start a war, but to prevent one,” Blinken said.

“Every indication that we have is that they are prepared to go into Ukraine, attack Ukraine,” Biden told reporters as he left the White House on Thursday.

Russia once again dismissed the notion it was preparing to attack Ukraine as “baseless accusations.”

In his address to the Security Council, Blinken laid out several steps the US expected Russia to take in the coming days in an attempt to justify military action in Ukraine. He said Moscow was likely to try to generate a pretext for the war, which could be a fabricated terrorist bombing inside Russia, the invented discovery of a mass grave or a staged drone strike.

“Russia may describe this event as ethnic cleansing or a genocide, making a mockery of a concept that we in this chamber do not take lightly,” Blinken said.

Blinken said that top Russian officials were likely to hold urgent meetings before an attack that would include Russian bombings across Ukraine and cyberattacks. Blinken said the US believes Moscow has already selected targets that Russian tanks and troops would advance on, including Ukraine’s capital, Kyiv.

Blinken acknowledged “that some have called into question our information,” nodding to past problems with US intelligence in the run-up to the Iraq War. But he said the US would be relieved if it’s predictions are proven incorrect and Russia changes course.

“The information I presented here is validated by what we’ve seen unfolding in plain sight before our eyes for months,” Blinken said. “Remember that while Russia has repeatedly regarded our warnings as melodrama and nonsense, they’ve been steadily amassing more than 100,000 troops on Ukraine’s borders.”

Russian Deputy Minister for Foreign Affairs Sergey Vershinin, who spoke before Blinken at Thursday’s Security Council meeting, warned others about making the UN meeting a “circus,” saying they should not present “baseless accusations saying that Russia allegedly was going to attack Ukraine.”

“We have long ago clarified everything and explained everything. And the announced date of this so-called invasion is behind us, so therefore … my advice to you is [to] not present yourself in an awkward situation,” Vershinin said.

On Thursday, the US received a response from Russia to the written proposals the US submitted to Russia three weeks ago, a senior State Department official said.

In an 11-page document published by state news agency RIA-Novosti, Moscow said the US did not provide a constructive response and that “the increasing US and NATO military activity close to Russian borders is alarming.”

“It’s about giving up the further expansion of NATO,” the response said.

As tensions continued to ratchet up, the State Department said Thursday that Russia expelled the second-most senior diplomat at the US embassy in Moscow without any justification, in what the Biden administration views as an escalatory move.

Gorman departed Moscow last week, according to a senior State Department official. He was expelled by Moscow earlier this year and given two weeks to depart.

“Russia’s actions against our deputy chief of mission, who was a key member of the embassy’s leadership team, was unprovoked,” White House principal deputy press secretary Karine Jean-Pierre told reporters aboard Air Force One. “Now more than ever, it is critical that our countries have the necessary diplomatic personnel in place to facilitate communication between our governments.”addressing the UN because “this is a crucial moment.”

“The evidence on the ground is that Russia is moving towards an imminent invasion,” she said. “Our goal is to convey the gravity of the situation,” she said.

Blinken said that he proposed in a letter a meeting next week with Russian Foreign Minister Sergey Lavrov in Europe to continue diplomacy, along with meetings of the NATO-Russia council and the Organization for Security and Cooperation in Europe.

US Secretary of Defense Lloyd Austin on Thursday also said the US government is not seeing any kind of withdrawal of Russian troops from Ukraine’s border, instead seeing Russia adding to its capabilities and troops “even in the last couple of days.”

During a press conference at NATO headquarters in Brussels, Austin said the US is seeing Russia move some troops closer to the border, fly in more combat and support aircraft, stock up on blood supplies and “sharpen their readiness in the Black Sea.”

“I was a soldier myself not that long ago, and I know firsthand that you don’t do these sort of things for no reason, and you certainly don’t do them if you’re getting ready to pack up and go home, so we and our allies will stay vigilant,” he said Thursday.

Russia has rockets and artillery arrayed in a way that can target cities and other concentrated population areas, according to a US official.

The US has been flying aerial surveillance over Ukraine for some time now, using a combination of RC-135 Rivet Joints and RQ-4 Global Hawks, as part of its intelligence gathering efforts. Those flights have continued, even as concerns of an invasion have grown.

Echoing comments from Biden and other administrations officials, the US official said the Russians have everything in place to conduct a full-scale invasion of Ukraine, far more than is needed if the goal was only to target the Ukrainian military.

The official did not say Putin has made a final decision to invade and noted he could call troops back any time he wants, but warned, “Everything we see speaks to intent.”

In trying to figure out Putin’s next move, the US is looking at the total environment in eastern Europe — from renewed fighting in Donbas to the false flag operations to the Russian disinformation campaign — and comparing that to the latest intelligence to connect those elements as a possible pretext for an invasion.

But it is imprecise work and not possible to draw out an absolute conclusion about whether or when Putin will move in. Still, there is growing confidence in Putin’s eventual move. The official said the US is seeing preparations that already show the “intentions to do military operations.”

In eastern Ukraine, monitors of the Organization for Security and Cooperation in Europe reported a sharp escalation in ceasefire violations along the frontlines dividing Ukrainian and separatist forces.

Both Ukrainian armed forces and separatists controlling parts of eastern Ukraine spoke of renewed shelling in the region early Thursday. Video and images confirmed by CNN show that a kindergarten in Ukrainian-controlled territory was hit by a shell Thursday.

In a statement on Twitter, Dmytro Kuleba, Ukraine’s foreign minister, said the village of Stanytsia Luhanska “was shelled with heavy weapons from the occupied territory of the Donbas.

“These shells came from the temporarily occupied territories of Ukraine, which are controlled by Russia,” Kuleba said in Kyiv.

NATO Secretary General Jens Stoltenberg said earlier Thursday that NATO allies are concerned that Russia is attempting to “stage a pretext” for an armed attack against Ukraine.

He added that NATO has observed “false flag operations” in Ukraine by Russian intelligence officers to “provide an excuse for invading Ukraine.”

“We don’t know what will happen, but what we do know is that Russia has amassed the biggest force we have seen for decades in and around Ukraine,” Stoltenberg said.

Amid the tension between Russia and the West, US, NATO and European officials are converging in Munich for an annual conference to address global security issues. Russia is not planning to attend.

Vice President Kamala Harris is leading the US delegation that includes Blinken to the Munich Security Conference, and plans to meet with Ukrainian President Volodymyr Zelensky and Stoltenberg during the trip.

Austin has also been traveling this week, meeting with other defense ministers of NATO to discuss Russia’s military buildup, before he heads to Poland and Lithuania to meet with the country’s leaders and US troops.

This story has been updated with additional developments Thursday.