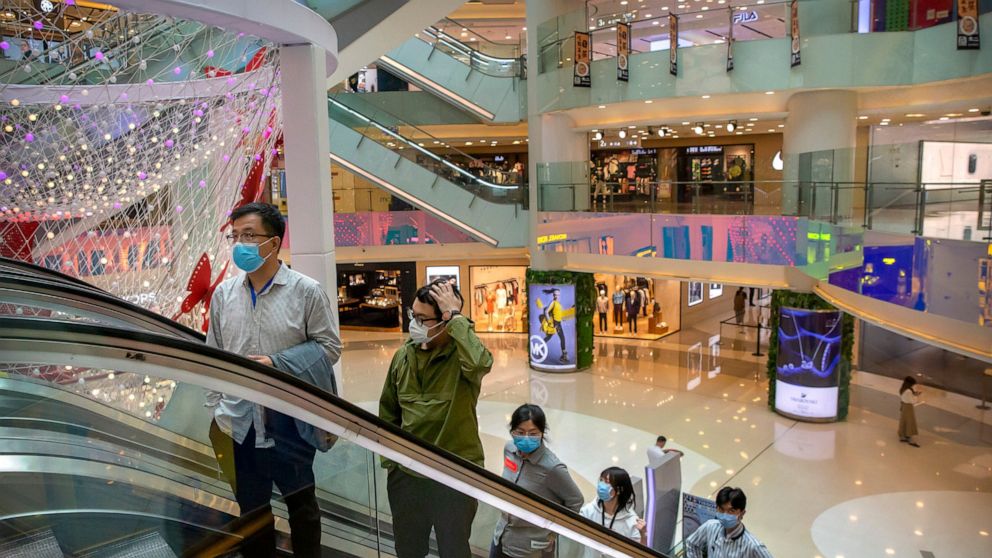 BEIJING — China faces a drawn-out struggle to revive its economy after it suffered its biggest contraction since at least the 1970s after ordering hundreds of millions of people to stay home to fight the coronavirus.

The world’s second-largest economy shrank by 6.8% from a year earlier in the quarter ending in March after factories, offices and shopping malls were closed to contain the outbreak, official data showed Friday. Consumer spending, which supplied 80% of last year’s growth, and factory activity were weaker than expected.

China, where the pandemic began in December, is the first major economy to start to recover after the ruling Communist Party declared the virus under control last month. It has allowed factories to reopen but cinemas and other businesses that employ millions of workers still are closed.

There are signs that after an “initial bounce” as controls ended, “the recovery in activity has since slowed to a crawl,” Julian Evans-Pritchard of Capital Economics said in a report.

“China is in for a drawn-out recovery,” he said.

Forecasters earlier said China might rebound as early as this month. But they say a sharp, “V-shaped” recovery looks increasingly unlikely as negative export, retail sales and other data pile up.

Instead, they expect a gradual crawl back to growth in low single digits in the coming quarters. For the full year, forecasters including UBS, Nomura and Oxford Economics expect little to no growth.

Retail sales fell 19% from a year earlier in the first quarter. That improved in March, the final month of the quarter, to a decline of 15.8%. But consumers, jittery about possible job losses, are reluctant to spend despite government efforts to lure them back to shopping malls and auto showrooms.

That is a blow to automakers and other companies that hope China will power the world economy out of its most painful slump since the 1930s.

Job-hunter Ni Hong’s challenge highlights the problem. Ni, 32, quit her job in Beijing in January to find a new one, but the virus disrupted those plans. Ni is paying her mortgage out of her savings and avoiding other spending while she looks in a market flooded with newly laid-off workers.

“In the past, there were maybe two or three candidates for a post,” Ni said. “Now, I have eight to 10 competitors, so the chance for me to be eliminated is much higher.”

China’s leaders base their claim to power on their ability to deliver economic success. The ruling party has appealed to companies to keep paying employees and avoid layoffs. But an unknown number have failed, adding to the public’s anxiety.

The economy already was squeezed by a tariff war with President Donald Trump over Beijing’s technology ambitions and trade surplus. Last year’s growth sank to a multi-decade low of 6.1%.

Exports were down 6.6% in March from a year earlier, an improvement over the double-digit plunge in January and February. But forecasters say demand is bound to slump in America and Europe as anti-virus controls keep shoppers at home.

“Lingering consumption weakness and sliding foreign demand will weigh on the upturn,” Louis Kuijs of Oxford Economics said in a report.

Growth was stronger than some forecasts that called for a contraction of up to 16% but this is the biggest contraction since market-style reforms started in 1979.

“The numbers were even uglier than most anticipated, which is good!” said Andy Rothman of Matthews Asia said in a report. “These ugly numbers indicate that the leadership didn’t fudge the data to hide the seriousness of the situation.”

Investment in factories, real estate and other fixed assets, the other major growth driver, sank 16.1%.

Auto sales sank 48.4% from a year earlier in March. That was better than February’s record 81.7% plunge but is on top of a 2-year-old decline that is squeezing global and Chinese automakers in the industry’s biggest global market.

Asian stock markets rose following the announcement, which was in line with investor expectations and likely raised hopes for more economic stimulus. By mid-afternoon, Tokyo’s benchmark Nikkei 225 index was up 3% and Hong Kong’s Hang Seng was 2.4% higher.

The ruling party has yet to announce this year’s official growth target. It has been at least 6% in previous years. Beijing looks likely to miss its target of doubling incomes from 2010 levels by this year.

Uncertainties remain as authorities work to snuff out fresh virus outbreaks in various regions. Controls on Beijing, the capital, and some other cities have been tightened to prevent a resurgence of the disease. Most foreigners are barred from entering the country.

Beijing is trying to prop up activity by spending more on building next-generation telecoms networks and other projects. But the ruling party doesn’t want to pump too much money into the economy for fear adding to debt or pushing up inflation that is near a seven-year high.

The ruling party is focused on keeping employment stable instead of the headline economic growth number, said Lynda Zhou of Fidelity International.

“Small-scale stimulus may still be expected, most likely focusing on the consumption side and encouraging investment in the technology space,” Zhou said in a report.