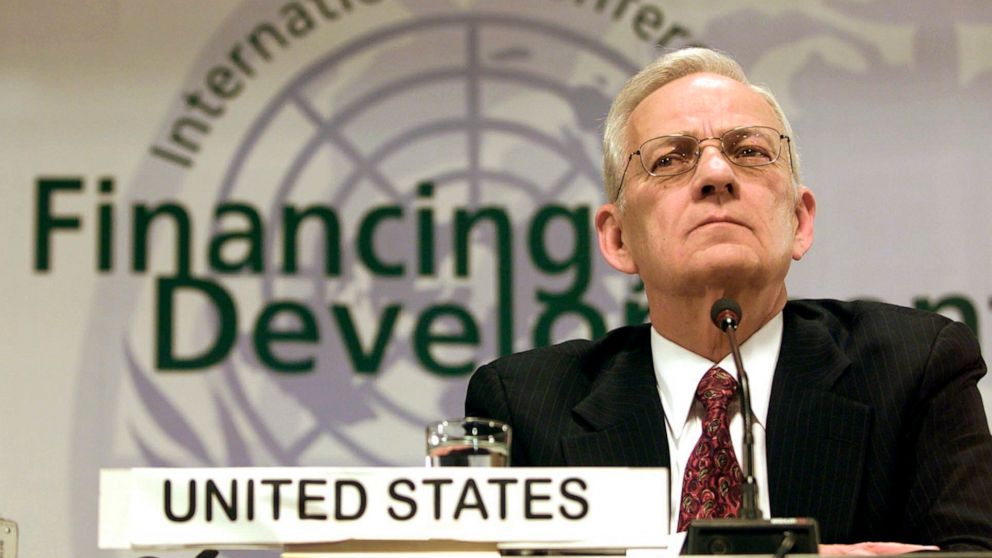 PITTSBURGH — Paul O’Neill, a former Treasury secretary who broke with George W. Bush over tax policy and then produced a book critical of the administration, died Saturday. He was 84.

O’Neill’s son, Paul O’Neill Jr. confirmed that his father died at his home in Pittsburgh after battling lung cancer for the last couple of years. After a few surgeries and chemotherapy, he decided against any further intervention four or five months ago, he said.

“There was some family here and he died peacefully,” the son said. “Based on his situation, it was a good exit.”

A former head of aluminum giant Alcoa, O’Neill served as Treasury secretary from 2001 to late 2002. He was forced to resign after he objected to a second round of tax cuts because of their impact on deficits.

O’Neill’s blunt speaking style more than once got him in trouble as Treasury secretary. He sent the dollar into a tailspin briefly in his early days at Treasury when his comments about foreign exchange rates surprised markets. In the spring of 2001, O’Neill jolted markets again when during Wall Street’s worst week in 11 years, he blandly declared “markets go up and markets go down.”

He was more focused on the traditional Treasury secretary’s job of instilling confidence during times of turbulence later that year when he helped get Wall Street re-opened after the Sept. 11 terror attacks. O’Neill was also instrumental following the attacks in beefing up the government’s programs to disrupt financing to terrorist groups.

Treasury Secretary Steven Mnuchin said Saturday on Twitter, “Saddened to hear of the passing of the former 72nd Treasury Secretary, Paul O’Neill. He served @USTreasury and America with distinction during challenging times. My condolences to his family.”

Tony Fratto, who served as O’Neill’s Treasury spokesman, described O’Neill as a “working class guy” who “cared about how things impacted real people.”

Fratto, currently a partner with Hamilton Place Strategies in Washington, said that one of O’Neill’s passions was workplace safety, and that he would tour the Treasury building looking for safety issues that needed to be fixed.

After leaving the administration, O’Neill worked with author Ron Suskind on an explosive book covering his two years in the administration. O’Neill contended that the administration began planning the overthrow of Iraqi President Saddam Hussein right after Bush took office, eight months before the Sept. 11 terrorist attacks.

O’Neill depicted Bush as a disengaged president who didn’t encourage debate either at Cabinet meetings or in one-on-one discussions with Cabinet members. He said the lack of discussion in Cabinet meetings gave him the feeling that Bush “was like a blind man in a roomful of deaf people.”

He said major decisions were often made by Bush’s political team and Vice President Dick Cheney. O’Neill had been recruited to join the Cabinet by Cheney, his old friend from the Gerald Ford administration. But it was Cheney who told O’Neill that the president wanted his resignation. It was part of a move by Bush to shake up his economic team and find a better salesman for a new round of tax cuts the president hoped would stimulate a sluggish economy.

When the book, “The Price of Loyalty: George W. Bush, the White House and the Education of Paul O’Neill” came out in early 2004, Bush spokesman Scott McClellan discounted O’Neill’s descriptions of White House decision-making and said the president was “someone that leads and acts decisively on our biggest priorities.”

After leaving the Cabinet, O’Neill returned to Pittsburgh, where he had headed Alcoa from 1987 to 1999. He resumed working with the Pittsburgh Regional Health Care Initiative, a consortium of hospitals, medical societies and businesses studying ways to improve health care delivery in Western Pennsylvania. The subject had interested him since his days as a budget analyst in Washington with the Office of Management and Budget.

He also devoted time in retirement to projects that would deliver clean drinking water to Africa. As Treasury secretary, O’Neill had focused attention on poverty and combating diseases such as AIDS in Africa, touring the continent with Irish rock star Bono.

While at Alcoa, O’Neill lifted the company out of the doldrums during his 12-year stint as the Pittsburgh company’s CEO. Shortly after he took the job in April 1987, he began emphasizing factory safety and employee dignity as a top priority.

His ideas weren’t initially well received by profit-driven investors, who cared more about Alcoa’s financial performance. After hearing one of O’Neill’s first presentations as Alcoa’s CEO, one money manager decided the company had put a “crazy hippie in charge” and advised his 20 largest clients to sell its stock, according to the book, “The Power of Habit” by Charles Duhigg.

That investor later called it one of his worst decisions. By the time, O’Neill stepped down as CEO in 1999, Alcoa’s accident rate had plunged and its stock had soared more than seven-fold at a time it was part of the Dow Jones Industrial Average.

Before joining Alcoa, O’Neill had been president from 1985 to 1987 of International Paper Co., a firm he had joined in 1977 after leaving OMB.

After graduating with an economics degree from California State University in Fresno in 1961, O’Neill joined the Veterans Administration in Washington, working as a computer systems analyst. He later moved to OMB and rose to become deputy director of the budget agency from 1974 to 1977, providing budget guidance to then-President Gerald Ford.

In June 2019, O’Neill received the Gerald R. Ford Medal for Distinguished Public Service, according to a piece in his hometown paper, the Pittsburgh Post-Gazette. Cheney and Alan Greenspan, who headed the Federal Reserve when O’Neill was Treasury secretary, are among the past recipients of the award.