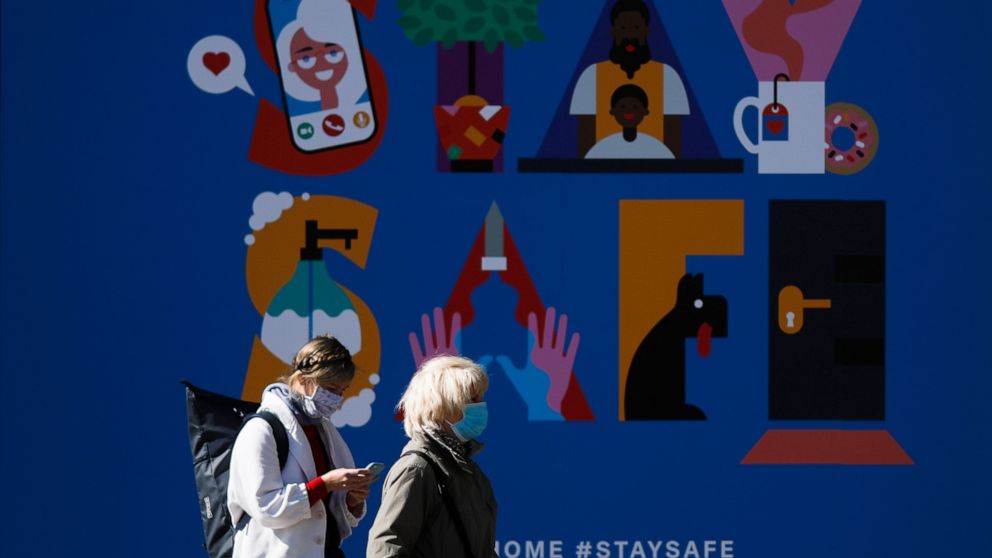 WASHINGTON — For weeks, the Trump administration played up the dangers of the coronavirus as it sought to convince Americans to disrupt their lives and stay home. Now, as President Donald Trump aims for a swift nationwide reopening, he faces a new challenge: Convincing people it’s safe to come out and resume their normal lives.

It’s a defining question for a cloistered nation — and a political imperative for Trump, whose reelection likely rides on the pace of an economic rebound.

Can the country move beyond a crippling fear of the virus and return to some modified version of its old routines, doing what’s possible to mitigate the risk of COVID-19, but acknowledging that it may be a fact of life for years to come?

“We need to create the kind of confidence in America that makes it so that everybody goes back to work,” said Kevin Hassett, a White House adviser and former chair of the Council of Economic Advisers. “And that confidence is going to require testing and confidence that your workplace is a healthy place, but also confidence in the economy.”

At the White House, officials believe they’ve entered a new chapter of the pandemic response, moving from crisis mode to sustained mitigation and management.

It began last Thursday with the release of guidelines to governors for how to safely reopen their states. Trump and Vice President Mike Pence celebrated Americans for successfully “flattening the curve” of the epidemic.

A day later, a phalanx of the administration’s top medical officials sought to reassure the nation that there were plenty of tests avHowever, he slapped Republican Georgia Gov. Brian Kemp’s aggressive reopening plans. “I disagree strongly,” he said. “I think it’s too soon.”ailable to safely begin easing restrictions.

Governors have been lifting restrictions each day since then, including aggressive moves announced Wednesday in Montana and Oklahoma. The Montana governor gave schools the green light to open their doors in early May, and Oklahoma will allow salons, barbershops, spas and pet groomers to reopen Friday.

The governors’ moves coincided with lingering bleak news around the country. The death toll in Massachusetts eclipsed 2,000 on Wednesday, doubling from just a week earlier. About 16,000 people remain hospitalized across New York. A meat plant in Iowa that is vital the nation’s pork supply is the latest slaughterhouse to shut down because of outbreaks. With the economy in for a long, brutal slump, Congress was on the verge of passing an almost $500 billion relief bill to bolster small businesses.

At his press briefing, Trump flatly promised Americans that there will no repeat of the national lockdown.

“We will not go through what we went through for the last two months,” Trump said.

It’s a sharp shift in rhetoric after Trump and allies stressed the threat of an “invisible enemy” to convince people to abide by social distancing recommendations. The American people have also been scarred by the daunting death toll and images of body bags piled up in refrigerated trailers.

Moving from fear to acceptance will take confidence in government, medical professionals and businesses at a time when faith in those institutions is low. White House aides say restoring confidence will require the same “whole-of-America” approach that slowed the virus spread.

While there have been isolated protests in states aimed at lifting aggressive stay-at-home measures, most Americans don’t believe it will be safe to ease the restrictions anytime soon, according to a new survey from The Associated Press-NORC Center for Public Affairs Research.

Trump predicted earlier this month that the economy would take off like a “rocket ship once we get back to business.” But experts say the recovery will be far slower.

“It’ll be a very gradual process regardless of what a governor says or the president says,” said Dr. Robert Blendon, a Harvard professor of health policy and political analysis. He said the history of lockdowns, particularly the quarantine of more than 25,000 people around Toronto in 2003 to slow the spread of SARS, shows that it will take weeks, even months, for people to develop the confidence to resume normal activity.

Blendon also warned that a predicted second wave of COVID-19 could reverse any gains made in the interim.

It’s not just government, but individual businesses that will need to persuade employees and consumers that it’s safe to return, once they decide to reopen.

Delta Airlines CEO Ed Bastian on Wednesday warned his employees to be prepared for a “choppy, sluggish recovery even after the virus is contained.”

The White House says it expects businesses “will advertise to the public” about the safety measures they are putting in place when they reopen, said Larry Kudlow, the director of the National Economic Council. He said the White House is also considering asking Congress to provide liability protection for employers in case their workers or customers fall sick. “We want small businesses to have some confidence that if they do reopen, they’ll stay open,” Kudlow said.

The outbreak has infected over 2.5 million people and killed about 180,000 around the world, including more than 45,000 in the U.S., according to a tally compiled by Johns Hopkins University from official government figures, though the true numbers are believed to be far higher.

“For lots of reasons we put people on a state of heightened anxiety,” he said.

So even if people who are worried about their economic situation want to get back to work, “it’s less clear whether consumers who would go to a restaurant or a store or the doctor’s office” will change their behavior.

“There may be permanent behavioral changes in how people do business and interact as a society,” he said.

Trump hosted Cuomo in the Oval Office on Tuesday, viewing it as opportunity to win over one of the most trusted voices on the virus response about the nation’s ability to conduct enough tests to ensure it has a handle on the virus.

Trump agreed to work with Cuomo to double his state’s testing capacity, believing that if the administration can earns the buy-in of Cuomo, other governors across the state will follow.

Cuomo announced on Wednesday that he is is enlisting former New York City Mayor Mike Bloomberg to help create a massive “tracing army” that will find infected people and get them into isolation, a move toward building confidence among leery Americans.

At the White House, the administration is adjusting its posture away from drastic containment measures to managing virus “flareups” and bottlenecks in testing or supplies.

And officials hope to use the daily White House briefings to inundate Americans with facts and figures on testing and therapeutics, blanketing television with graphics of flattening and declining curves and statistics on the number of testing kits available.

White House officials also are planning to step up travel in coming weeks as a visual representation of reopening. Pence has traveled to Colorado and Wisconsin in recent days, and Trump is pushing aides to get him back on the road.

There are still plenty of caution flags.

“There’s a possibility that the assault of the virus on our nation next winter will actually be even more difficult than the one we just went through,” CDC Director Robert Redfield told The Washington Post in an interview on Tuesday. “We’re going to have the flu epidemic and the coronavirus epidemic at the same time.”

“We’ve got to be very careful,” Trump said Tuesday of a potential second wave, which in some predictions could hit just weeks before the November elections. “We don’t want that to happen; it could happen. I think we stamp it out if it does happen.”

Instead, White House aides hope that people accept a “new normal” that envisions short-term disruptions when there are COVID-19 cases, causing routine week-long school or office closures but not panic.

But Blendon said, “People will watch the cases and listen to the major public health leaders, and if there’s a conflict, that will slow things even greater.”