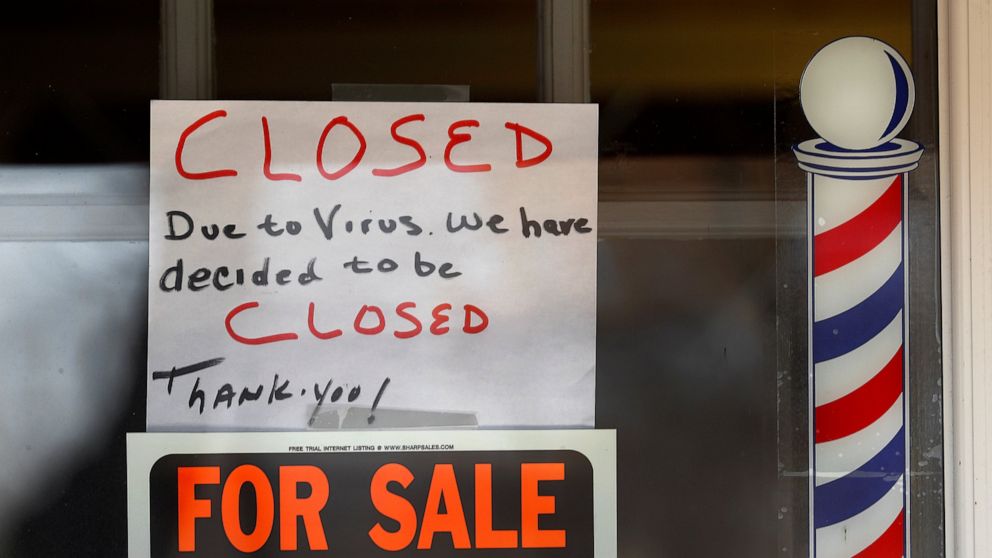 NEW YORK — The billions of dollars in coronavirus relief targeted at small businesses may not prevent many of them from ending up in bankruptcy court.

Business filings under Chapter 11 of the federal bankruptcy law rose sharply in March, and attorneys who work with struggling companies are seeing signs that more owners are contemplating the possibility of bankruptcy.

Companies forced to close or curtail business due to government attempts to stop the virus’s spread have mounting debts and uncertain prospects for returning to normal operations. Even those owners receiving emergency loans and grants aren’t sure that help will be enough.

The most vulnerable companies include the thousands of restaurants and retailers that shut down, many of them more than a month ago. Some restaurants have managed to bring in a bit of revenue by serving meals for takeout and delivery, but even they are struggling financially. Small and independent retailers, including those with online stores. are similarly at risk; clothing retailers have the added problem of winter inventory that they are unlikely to sell with spring here and summer approaching.

Independent oil companies whose revenue was slammed by the collapse in energy prices also are strapped, as are other companies that were already burdened with high debt levels before the virus struck.

Jennifer Bennett, who closed one of her San Francisco restaurants on Wednesday, was still waiting for the financial aid she sought from the federal, state and city governments. Even with the money, she doesn’t know if the revenue will cover the bills when she’s finally able to reopen Zazie — especially if she’s required to space tables six feet apart for social distancing.

“There is no reliable visibility into when business operations will be able to resume the pre-COVID normal,” Singerman says.

Even larger companies are in trouble, including already struggling retailers who had to shut their stores.

The jeans company True Religion filed for Chapter 11 earlier this month, saying extended closures of its stores in the pandemic have hurt its business. Recent reports say department store chains Neiman Marcus and J.C. Penney, which has struggled for years with slumping sales, could soon file for bankruptcy protection.

The number of Chapter 11 filings rose 18 percent in March from a year earlier, a dramatic swing from the 20 percent decrease in February, according to the American Bankruptcy Institute, a trade organization for attorneys and other professionals involved in bankruptcy proceedings. The numbers don’t break out filings by company size, but given that the vast majority of companies are small to mid-size, it does give an indication that smaller companies are struggling.

The federal government has already approved or given out more than 2 million loans and grants to small businesses totaling nearly $360 billion; another $310 billion is on the way to one of the programs. Still, the money may be at best a stopgap for companies with little to no revenue coming in. And the new funds are expected to go so quickly that thousands of owners won’t get loans.

There’s no way to predict how many companies will file for bankruptcy. There were over 160,000 bankruptcy filings from 2008 to 2010, during the Great Recession and its aftermath, according to statistics compiled by the federal court system. The numbers don’t break out filings by company size. The majority were for liquidations. although some companies restructured their debt and continued operating under Chapter 11.

Many companies, however, just shut their doors, and that’s likely to be the case again, Singerman says. According to some estimates, 170,000 companies failed during the recession.

But the Small Business Reorganization Act, which took effect in February, may encourage more companies to seek Chapter 11. The law is aimed at allowing owners to retain their ownership rather than lose their companies to their creditors; that is generally what happens in Chapter 11. The law also streamlines the reorganization process so a company is not wiped out by attorneys’ fees, says Edward Janger, a professor at Brooklyn Law School in New York whose expertise includes bankruptcy law.

Another change under the law is that a bankruptcy judge can approve the reorganization over creditors’ objections, Janger says.

Business owners will try to avoid bankruptcy by seeking leniency from landlords, lenders and vendors, bankruptcy attorney David Wander says. But with their companies’ financial troubles beyond their control because of the virus outbreak, many will file for Chapter 11 because the stigma that bankruptcy has long held will be gone, says Wander, a partner at Davidoff Hutcher & Citron in New York.

“The tsunami is going to happen in the coming months and it’s going to be ongoing,” Wander says.