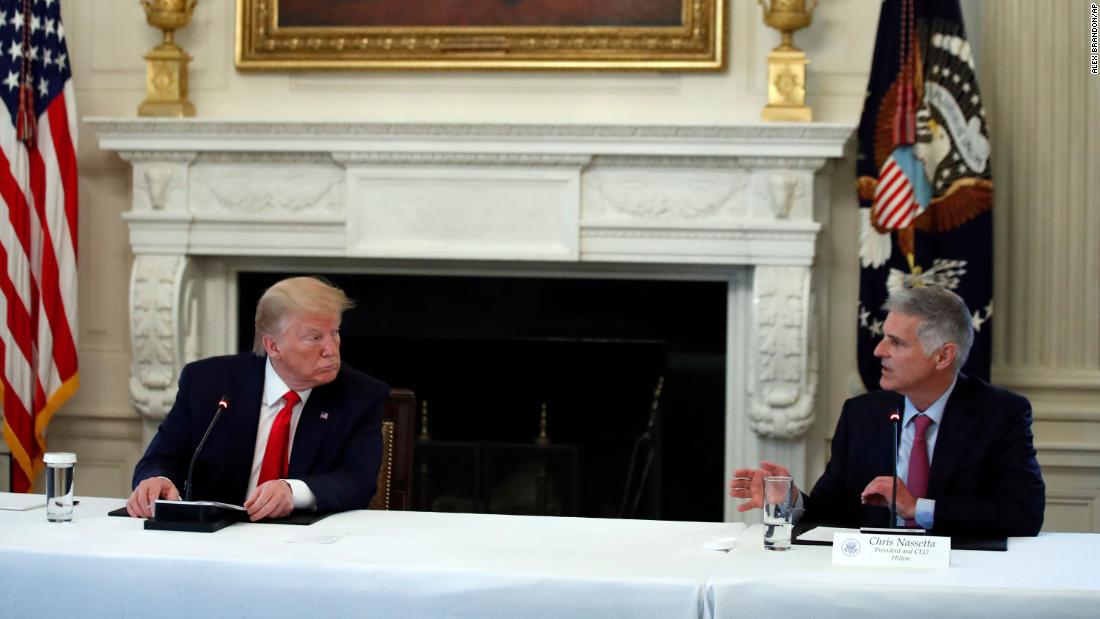 And then, 31 minutes later, the CEO sitting beside Trump made clear that his claim was nonsense.

Christopher Nassetta, president and CEO of the Hilton hotel company, did not confront Trump explicitly. But Nassetta communicated that more testing is essential to his company’s future — thus shattering the President’s absurd assertion that critical questions about the pace of testing are a mere “media trap.”

Early in the White House roundtable, Trump boasted of how well he says his administration has done in supplying ventilators and masks, saying you don’t even hear about these issues anymore, and about how well he claims it has done on testing. He added, “And you shouldn’t be hearing about testing, but that’s the last thing they can complain about, I guess.”

Talk about testing is not an anti-Trump scheme. Rather, it’s talk about a matter vital to the country’s future. Public health experts, who say the Trump administration was too slow to create an adequate testing system, have emphasized that conducting far more tests now is critical to limiting the further spread of the virus and safely lifting economic restrictions.
Republican governors and corporate executives have emphasized the same. When a reporter asked Wednesday if any of the executives present were worried people won’t really come back to their businesses until there is a coronavirus vaccine, Nassetta spoke up — and used the word “testing” three times.

Nassetta said “of course we worry about it.” Customers are “desperate” to get back out and travel, he said, but want safety. He continued: “…Our customers are saying they’re looking for the government, both state and federal government, to focus on testing so that they understand, you know, what real mortality rates are…”

Nassetta argued that more testing would help customers understand that people who are not elderly or infirm are probably at much lower risk than originally estimated. Then, after touting a new Hilton cleanliness program, Nassetta said his customers “want to know that people are being responsible. Right? They want to know that we are doing the testing, the social distancing…”

We still have a lot to learn about the coronavirus and mortality, and we know the virus can kill even younger people without serious health problems. Again, though, Trump had just said that you shouldn’t even be hearing about testing. Here was a business leader, invited to the White House by Trump’s own staff, talking repeatedly about the importance of testing while on camera with Trump.

Asked by CNN later Wednesday if Hilton wanted to add anything, company spokesman Nigel Glennie noted that the emphasis on testing was not Nassetta’s alone.

Glennie pointed out that the Centers for Disease Control and Prevention’s reopening guide says that “reopening the country also strongly relies on public health strategies, including increased testing of people for the virus,” and that the White House’s own reopening guide prominently mentions the importance of testing.

Once again, the conspiracy is in Trump’s head.