By Amelia Wynne For Mailonline

The three airports are also trialling temperature checks and looking at plans to ask all passengers to make a health declaration before entering.

Passengers will be expected to bring their own gloves and masks, but the airports will have some PPE supplies on standby.

‘They are designed to help the small number of passengers currently making essential journeys through our airports feel safer and more confident about flying at this time.’

It comes as the Eurostar says all its passengers must wear face masks as a safeguard against Covid-19, effective from Monday. 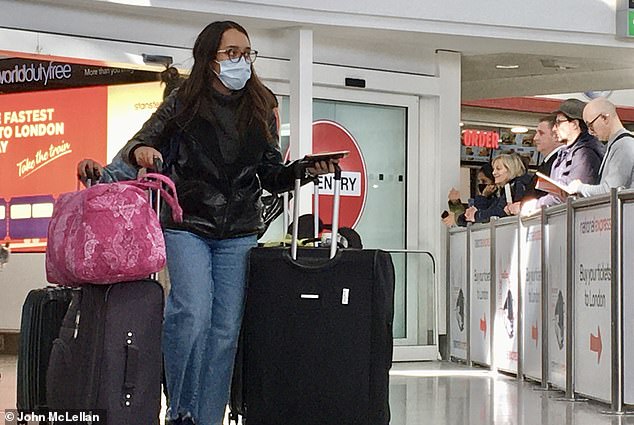 In a tweet in French and in English, the international high-speed train service says the policy will apply to both its trains and its stations, ‘in line with guidelines announced by the French and Belgian governments’.

It warned passengers without a mask could be refused travel.

Travellers to France, including French citizens returning home, will face a compulsory two-week quarantine and possible isolation when they arrive in the country to help slow the spread of coronavirus, the health minister said on Saturday.

‘This quarantine will be imposed on any person returning on French soil,’ Health Minister Olivier Veran told a press briefing after the weekly cabinet meeting.

It was not immediately clear whether the quarantine would only apply to people arriving from outside Europe’s open-border Schengen area, whether they would need to self-isolate at home or in hotels, and for how long the measures would be in place. 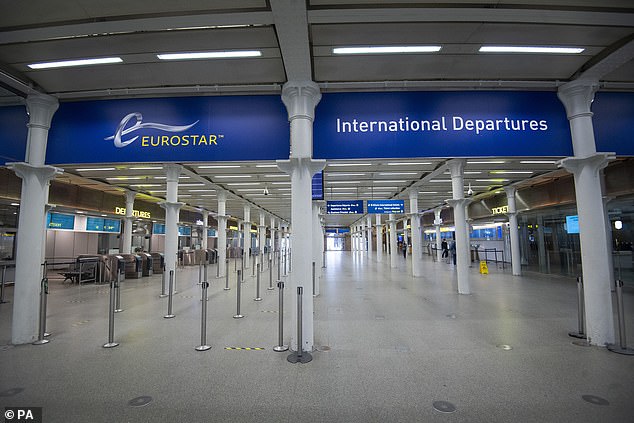 Eurostar says all its passengers must wear face masks as a safeguard against Covid-19, effective from Monday

The news of the requirement to wear a mask and gloves at the three UK airports comes as ministers have been accused of being ‘slow to work with airports’ on how air travel will function when the lockdown is lifted.

The Department for Transport set up a taskforce – the Recovery and Restart Group – weeks ago to discuss what measures should be brought in but it is thought it failed to consult with airports.

Charlie Cornish, boss of Manchester Airports Group told the Sunday Telegraph: ‘Government has been slow to work with the UK aviation industry. It is vital we work together to establish a workable set of proposals.

‘UK airports have put a package of measures on the table for discussion. We now need the Government to work urgently with airports and airlines to agree how we operate in the future.’

If the public decide to go on last-minute summer holidays after lockdown is lifted it is feared that airports will struggle to cope with a wave of travellers. 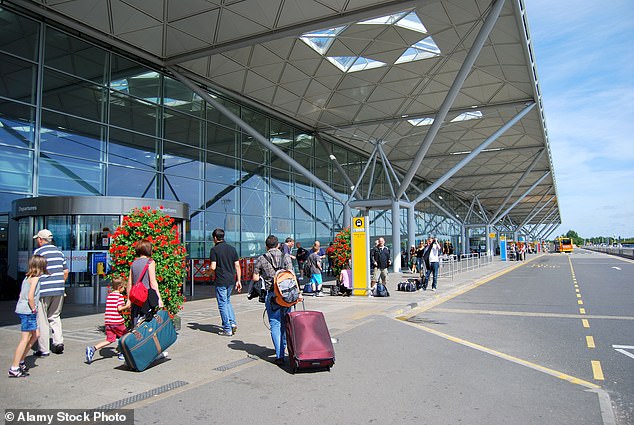 Passengers will be expected to bring their own gloves and masks, but the airports will have some PPE supplies on standby. Pictured: passengers outside Stansted airport

Michael O’Leary, the boss of Europe’s biggest airline Ryanair said that he expects ‘a rush to get to the beaches in July and August’.

Last week it was disclosed that British officials were drawing up plans based on the 14-day ‘stay home’ notices currently issued to Singaporean citizens returning to their country from abroad.

A poll then found overwhelming support for proposals for those flying into the UK to be asked to self-isolate for two weeks – with 92 per cent agreeing a scheme should be in place.

An ORB International survey of 2,082 people found only four per cent of people disagreed that both British citizens and those from abroad should be ‘forced to quarantine’ for a period of two weeks after flying into UK airports.

It comes as the debate over the effectiveness of wearing face masks rumbles on.

This week at a daily press briefing the PM Boris Johnson said face masks will be ‘useful’ as part of coming out of lockdown, both for disease control and for making people feel safe on public transport.

Current UK Government advice is for Britons to avoid all non-essential global travel indefinitely, but people are able to fly for other reasons such as to return home after being stranded overseas or if they are travelling for work.