By Harry Howard For Mailonline

A second peak of coronavirus cases can be avoided with the help of the NHS’s new contact-tracing app, the Government’s chief scientific adviser said, despite criticism the technology may have significant flaws.

The ‘test, track and trace’ app works via Bluetooth and will alert people if they have been in close contact with someone who later fell ill with COVID-19.

It was made available for medical staff on the Isle of Wight on Tuesday and if the trial is successful the Government plans to roll out the app to everyone across the UK.

Sir Patrick Vallance told MPs while giving evidence to the health select committee that he was optimistic that cases can be kept under control in the next stage of the epidemic. 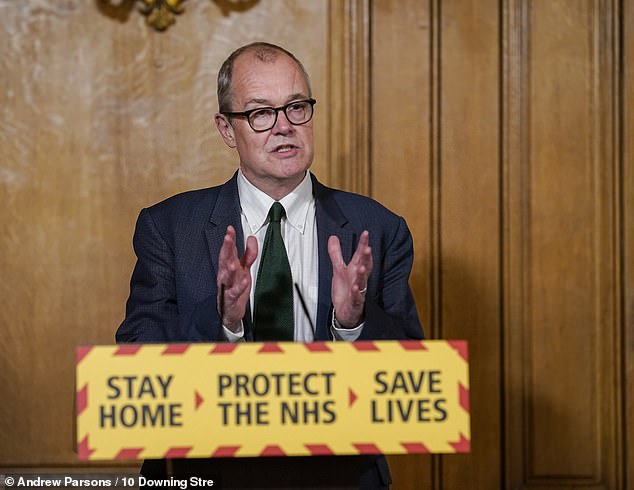 Sir Patrick Vallance, pictured at a Downing Street press conference on April 30, told MPs today that cities and rural areas could be treated differently when lockdown is eased

The Government is preparing to partially lift social distancing rules as part of an exit strategy to the lockdown which will be announced by Prime Minister Boris Johnson on Sunday.

The app is a key part of the strategy. Sir Patrick said: ‘If we do test, track and trace well and we keep the social distancing measures at the right level we should be able to avoid a second wave, so I’m at the more optimistic side.’

However, the Government conceded that a series of problems had been found by the app’s developers which needed to be fixed.

Sir Patrick also told MPs that the spread of the deadly disease was different in different parts of the UK, meaning restrictions may be lifted differently in cities and rural areas.

He said ‘densely-populated places have a higher prevalence than rural places’ and that means loosening restrictions could be tailored to each.

However, he suggested such an approach would not be without difficulties because regions would need to be carefully defined and the flow of people in and out would have to be monitored.

Boris Johnson is expected to renew the lockdown on Thursday before using an address to the nation on Sunday night to set out a lockdown exit strategy.

Downing Street is believed to want the whole of the UK to emerge from lockdown as one.

But it is thought Number 10 believes measures could be reimposed at a regional level if there were localised spikes in the number of new cases.

But Sir Patrick today suggested to the Health and Social Care Select Committee that it would be possible for different areas to be treated differently when rules are eased.

He said the ‘R’ rate of transmission is ‘potentially a bit variable across the country’ but not hugely different.

‘We know that cities and densely-populated places have a higher prevalence than rural places, so that is definitely the case and an option that could be considered is to think about whether measures could be done locally versus nationally,’ he said.

However, Sir Patrick said transport would be just one of the issues where problems could arise if the government adopted such an approach.

‘Once you go to a regional approach you effectively are saying that you are going to demarcate regions very carefully and you’ve got to control the flow between regions,’ he said.

‘But that is a possibility.’

Sir Patrick again reiterated that the ‘R’ number needs to be below one before lockdown measures can begin to be lifted.

He said the government’s current estimation of the value of ‘R’ remained at between 0.6 and 0.9.

He told the committee: ‘We will, I hope, get a better estimate once we can measure it more directly by measuring rates of infection in the community with large population-based surveys.

‘It needs to be below one, because as long as it’s below one that means that the epidemic is reducing.’