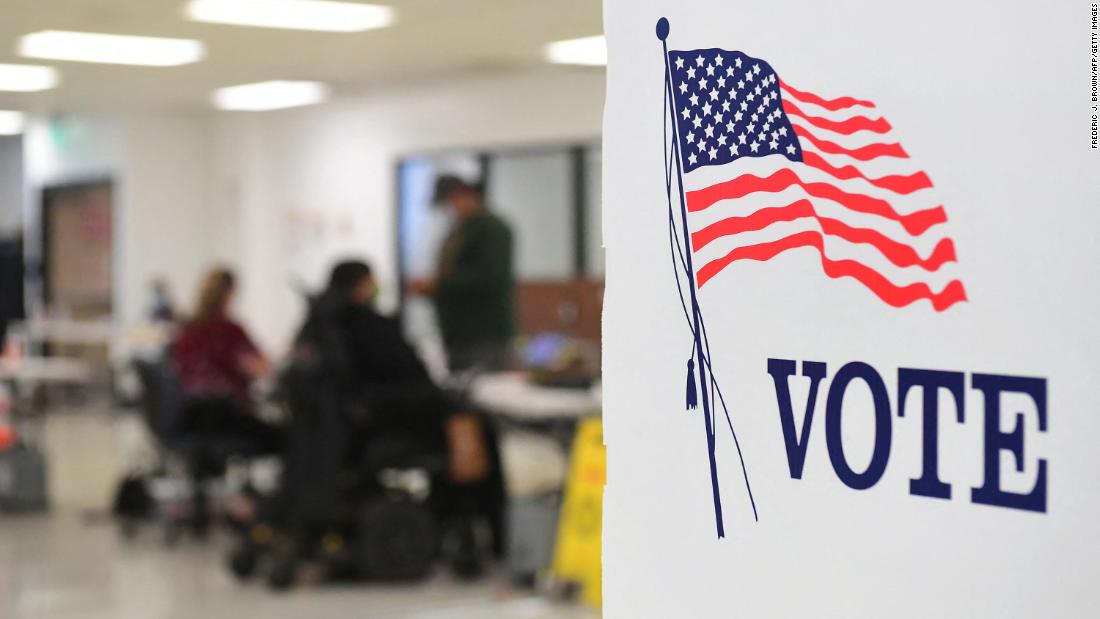 Newsom’s team was projecting confidence as the finish line came into view Tuesday night, with one top adviser telling CNN they “could be headed for record turnout” in a statewide special election. That would be a clear advantage for the Democratic governor in this overwhelmingly blue state.

The Newsom adviser told CNN that Biden’s eleventh hour visit “buoyed” the governor, and the President’s aides believe a strong showing could give Democrats and independents a stronger sense of confidence as the administration fights over mask-wearing, vaccines and more.

Exit polling on Tuesday night suggested that Newsom’s pandemic-focused message may have broken through with voters, who listed the coronavirus as the most pressing issue facing the state.

The effort to recall Newsom started small in 2020 and grew with frustrations about his strict pandemic restrictions. But fears of the Delta variant helped him shift the trajectory of the race late this summer as he painted a sharp contrast between his own response to the resurgent virus and that of his main GOP opponent, conservative talk radio host Larry Elder.
About 45% of the electorate say Newsom’s policies on the pandemic have been about right, with about one-third calling his policies too strict and the remainder saying they’re not strict enough, according to a California exit poll conducted for CNN and other news networks by Edison Research.

There’s broad support for Covid mitigation measures, with more than 6 in 10 saying that getting vaccinated is more of a public health responsibility than it is a personal choice.

The pandemic remains at the top of voters’ minds, with about one-third — the highest share of any issue — saying it’s the biggest issue for the state, according to the exit poll.

That fact alone may hearten Newsom, but voters’ assessments of the state of the coronavirus in California were mixed, with about 4 in 10 say the situation is getting better, 3 in 10 that it remains about the same and just under one-quarter that it’s worsening.

In order to hold onto his job, Newsom — first elected in 2018 — needs a majority of voters to have voted “no” on the first ballot question about whether they want to oust him. Newsom’s operation has largely been a turnout, rather than a persuasion, campaign. With registered Democrats outnumbering Republicans in the state by nearly 2 to 1, his biggest hurdle has been getting them engaged in an off-year election amid the disruptions of the pandemic. There were good signs for Newsom on that front in recent days, with Democrats casting pre-election ballots at a higher rate than their registration in the state, but Republicans have been counting on their voters showing up on Election Day to vote in person.

Only if a majority votes “yes” to remove Newsom does the second ballot come into play, determining who will serve as California’s governor through the end of Newsom’s term in January 2023. Voters have been asked to choose from a list of 46 candidates who qualified to have their name listed in the race to replace Newsom. Though nine Democrats are vying for Newsom’s job, the governor and the state Democratic Party have urged their supporters to skip the second question altogether to limit confusion or the inclination to skip the election if voters have not had time to research the replacement candidates. If a majority votes to remove Newsom, any of those replacement candidates could become the next governor with a simple plurality, which in this case could amount to a small fraction of the state’s electorate.

Those quirky recall rules have helped Newsom paint Elder as a viable threat to this deep blue state.

A Republican who supported former President Donald Trump, Elder has consistently dominated the field of replacement candidates in the polls since he entered the race in mid-July. During his long career in talk radio, as well as in his columns and his books, Elder has voiced views that are at odds with those of the majority of Californians. Democrats have been critical of his opposition to the minimum wage, his endorsement of pregnancy discrimination, his past derogatory comments about women and his skepticism about the climate crisis.

Biden called Elder a “clone of Donald Trump” Monday night, casting the California election as a mission to once again defeat the former Republican President he unseated last fall and protect “California from Trump Republicans trying to block us from beating this pandemic.”

“You either keep Gavin Newsom as your governor,” Biden said, “or you’ll get Donald Trump.”

Newsom leaned into the differences between his and Elder’s approaches to stop the spread of Covid-19, which many California strategists say tilted the race in Newsom’s favor in the final weeks.

If elected, Elder has promised to reverse Newsom’s requirement that all state employees and health care workers are vaccinated or will submit to weekly testing. In an interview with CNN, Elder said he doesn’t think the science shows that it’s necessary for young people to get vaccinated or for children to wear masks at school — claims that are inaccurate.
Newsom often highlights the state’s high vaccination rate, with about 57% of the state fully vaccinated, and low 7-day case positivity rate, which was 4.4% on Monday, according to the California Department of Health. Elder’s opposition to mask and vaccine mandates led Newsom to frame the recall vote as a “life or death” choice for voters, a message that was amplified by big name Democrats who came to the West Coast to campaign for him, including Biden, Vice President Kamala Harris and Massachusetts Sen. Elizabeth Warren.

Newsom adviser Sean Clegg told reporters Monday night that the surge of the Delta variant was a “turning point” for the campaign.

“What Delta brought into clear, clear focus was what the stakes are in this election when one party has basically become an anti-science, anti-vaccine, anti-public health party,” Clegg said.

The only successful gubernatorial recall in California was in 2003 when voters tossed out Democratic Gov. Gray Davis and replaced him with Arnold Schwarzenegger, a Republican and famous movie star who won with 48.6% of the vote.
The campaign to recall Newsom appeared to be gaining ground in late July and early August when polls showed a tight race. But in the most recent poll from the Public Policy Institute of California, conducted in late August, only 39% of likely voters said they would vote to remove Newsom and 58% said they would vote to keep him.

Partisanship is not a perfect predictor of voter behavior in this election, but in that same survey, 90% of likely Democratic voters said they wanted to keep Newsom and 7% said they would vote to recall him. Among likely Republican voters, 82% favored recalling Newsom and 17% said they were opposed to the recall. Independent voters were more split: 44% said they favored the recall and 49% were against it.

When Newsom was elected with more than 60% of the vote in 2018, it would have seemed inconceivable that an effort to oust him would succeed in a state where Democrats have such a significant voter registration advantage and hold every statewide office. But the push to recall Newsom — which was launched early last year by a group of conservative activists who didn’t like his record on taxes, the death penalty, immigration and the state’s homelessness crisis — gained momentum late last year amid rising frustrations about his handling of the Covid-19 pandemic.

In March of 2020, Newsom became the first governor in the nation to enforce a statewide shutdown to slow the spread of Covid-19 and he initially won accolades with his pro-active approach, even from Trump. But as the pandemic wore on, many business and restaurant owners grew frustrated by what they viewed as his shifting regulations for closing and re-opening their storefronts.
His critics were infuriated by his temporary closures of beaches after the governor said crowds that turned out in warm spring temperatures were not following guidelines for social distancing. Many parents felt that the criteria that his administration set for re-opening public schools kept students out of the classroom for far too many months.

Under the California Constitution, recall proponents were required to gather 1,495,709 valid signatures from voters to qualify the recall for the ballot — a figure equivalent to 12% of the votes cast in the prior gubernatorial election. Their efforts were bolstered by a California judge’s decision in November to extend the deadline for collecting those signatures by four months.

In an unforced error, Newsom attended the unmasked birthday dinner of a lobbyist friend at an elite Napa Valley restaurant at a time when he was urging Californians to stay home and avoid gatherings with large groups outside their households. His critics charged him with hypocrisy, and he apologized, but the national attention to what he called “a bad mistake” likely led many more voters to sign the signature petitions.

As the state was ramping up its Covid-19 vaccination program earlier this year, Newsom was still trying to swat away questions about what his team had framed as an attempted Republican takeover of state government by Trump loyalists. But there were some danger signs for Newsom. Polls repeatedly reflected high enthusiasm among Republican voters for recalling him, but relatively low interest in the election from Democratic voters, many of whom were not even aware of the recall.

Though the pro-recall forces turned in all their signatures in March, the gears of the state bureaucracy moved slowly and the September 14 date for the special election was not set until July.

Democrats and their many allied groups scrambled to educate voters about the unusual date of the election and the two-question ballot. In the end, Newsom raised more than $71 million through the committee that he created to fight the recall, which has no fundraising limits, far outpacing his rivals and the pro-recall campaigns.

Heading into election night, both Elder and Trump have basely raised the idea of fraud in this election — following the former President’s pattern for contesting the results of his own losing 2020 campaign. Without citing any evidence of wrongdoing, Elder has threatened lawsuits. The Newsom campaign has said they stand ready to respond to them.

This story has been updated.