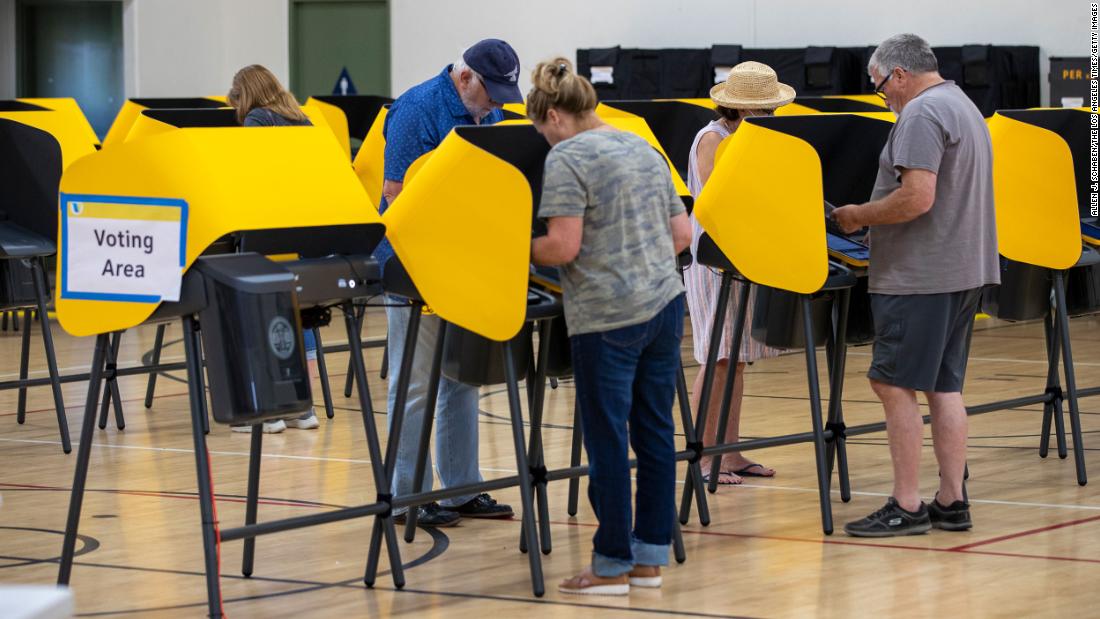 Democrats faced fresh warning signs Tuesday night in two blue states at a moment when they are trying to get their base voters energized and primed for an intensely competitive election year.

In both California and New Jersey – states with key US House races that could determine control of Congress – early metrics suggest that turnout has been low, reflecting the sour mood of voters about gas prices, rising crime and an uncertain economy.

Voter disengagement was most evident in California, where nearly 22 million ballots were mailed out to every eligible voter. Despite an array of competitive House races – where the top two vote-getters regardless of party will advance to the general election – and several marquee local contests, including the race for mayor in Los Angeles and an attempted recall of San Francisco’s district attorney, only about 18% of ballots had been returned as of Tuesday even though they were mailed to voters weeks ago, according to ballot tracking data from the California-based firm Political Data Intelligence.

In New Jersey, few of the state’s voters opted to cast their ballots in the three-day window for in-person early voting, but Secretary of State Tahesha Way noted in an interview with ABC News that the process is new, meaning it could take some time for voters to take advantage of it. Those early indicators, however, stand in sharp contrast with the high turnout during early voting in states like Georgia, where a more restrictive new voting law led activists to redouble their efforts to get voters to cast their ballots ahead of the primary.

Aside from California and New Jersey, voters cast primary ballots in Iowa, Mississippi, Montana, New Mexico and South Dakota on Tuesday as the focus shifts from the big US Senate contests that dominated the May calendar – where former President Donald Trump’s influence was repeatedly tested – to competitive House races that will offer a window into how much voters intend to blame the party in power for their current unease about the state of the economy and the country.

But Golden State voters are contending with the highest gas prices in the nation and unnerved by the spike in violent crime, as well as a crushing homelessness crisis that many say seems to be worsening, even though billions of dollars are flowing to build housing for those living on the streets. All those issues have surfaced in the close races in the state, emboldening Republicans who are advancing the notion that things are spiraling out of control.

8 things to watch in Tuesday’s primaries

Two high-profile local races in heavily Democratic cities in California – the race to replace term-limited Los Angeles Mayor Eric Garcetti and the effort to recall progressive San Francisco District Attorney Chesa Boudin – have also demonstrated how far the pendulum has swung from the 2020 cycle, when criminal justice was a central issue for Democrats after the police killing of George Floyd in Minneapolis.

In San Francisco, Boudin’s progressive policies as a national criminal justice reform advocate have become a central point of contention as residents have watched burglaries and car thefts increase – fueling calls for his ouster.

The LA mayor’s race has pitted six-term US Rep. Karen Bass against shopping mall developer Rick Caruso, a former Republican and billionaire who has spent more than $40 million driving his message that career politicians in Los Angeles are incapable of addressing rising crime or the homelessness crisis. While Bass says she would return the Los Angeles Police Department to its authorized force of 9,700 officers – in part by hiring more civilians to free up 250 officers to return to street patrol – Caruso has promised to hire 1,500 additional cops.

Several California Republican incumbents faced their own challenges Tuesday as the various factions of the GOP continue to wrestle for dominance. US Rep. David Valadao, one of ten GOP members who supported Trump’s 2021 impeachment, faced a challenge on his right in his Democratic-leaning Central Valley seat – the new 22nd Congressional District. Former Fresno City Councilmember Chris Mathys said he decided to run because of Valadao’s impeachment vote, but Trump has not gotten involved in the race.

On the flip side, Democrats hope to use GOP Rep. Mike Garcia’s ties to Trump against him in California’s 27th District after redistricting made his northern Los Angeles County seat more Democratic. (Garcia voted against certifying the 2020 presidential election results in Arizona and Pennsylvania.) Two Democrats, former state Assemblywoman Christy Smith and Quaye Quartey, a former Navy intelligence officer, are jockeying for the chance to take him on in November.

Incumbent GOP Rep. Chris Smith, who voted for the bipartisan infrastructure bill, is fending off an array of primary challengers in the 4th District in central New Jersey, including Mike Crispi, a talk show host endorsed by Trump allies such as Roger Stone and Rudy Giuliani.

In Montana, Trump is backing his former Interior secretary Ryan Zinke – despite’s his history of controversy – as the candidate attempts to return to Congress. The state won a second congressional seat following the 2020 census results. He is facing four other candidates in Tuesday’s GOP primary, including former state Sen. Al Olszewski and pastor Mary Todd, as questions swirl about Zinke’s residency. Politico recently reported that Zinke’s wife claimed a home in Santa Barbara as her primary residence on tax records, but Zinke maintains that he lives in Whitefish, Montana.

In Iowa, former US Rep. Abby Finkenauer is leading the Democratic Senate field in fundraising two years after losing her re-election campaign to Republican Rep. Ashley Hinson. She is facing retired Navy Adm. Mike Franken and Glenn Hurst, a Minden City Council member, in the primary. Finkenauer was in jeopardy of failing to make the ballot after a lower court in Iowa questioned some of the signatures on her nominating petition, but ultimately the Iowa Supreme Court ruled that her name could appear.

On the Republican side, CNN projected that Sen. Chuck Grassley will win the primary as he seeks an eighth term representing Iowa in the Senate.

Here are the key House primaries to watch beyond California

One of the most competitive races in the Hawkeye State is in the 3rd District, where incumbent Rep. Cindy Axne, the only Democrat in the congressional delegation, hopes to hold her seat in a district that Trump would have won by less than half a point. CNN projected that state Sen. Zach Nunn, an Air Force veteran, will win the Republican primary in the Des Moines-area district.

In South Dakota, state Rep. Taffy Howard is challenging GOP Rep. Dusty Johnson for the state’s only congressional seat, criticizing him for voting to certify the 2020 election results as she embraces Trump’s falsehoods about that election. CNN projected that South Dakota GOP Gov. Kristi Noem, a potential 2024 contender, will defeat her primary challenger, state Rep. Steven Haugaard, who had accused her of being insufficiently conservative and spending too much time as governor tending to her ambitions for higher office.