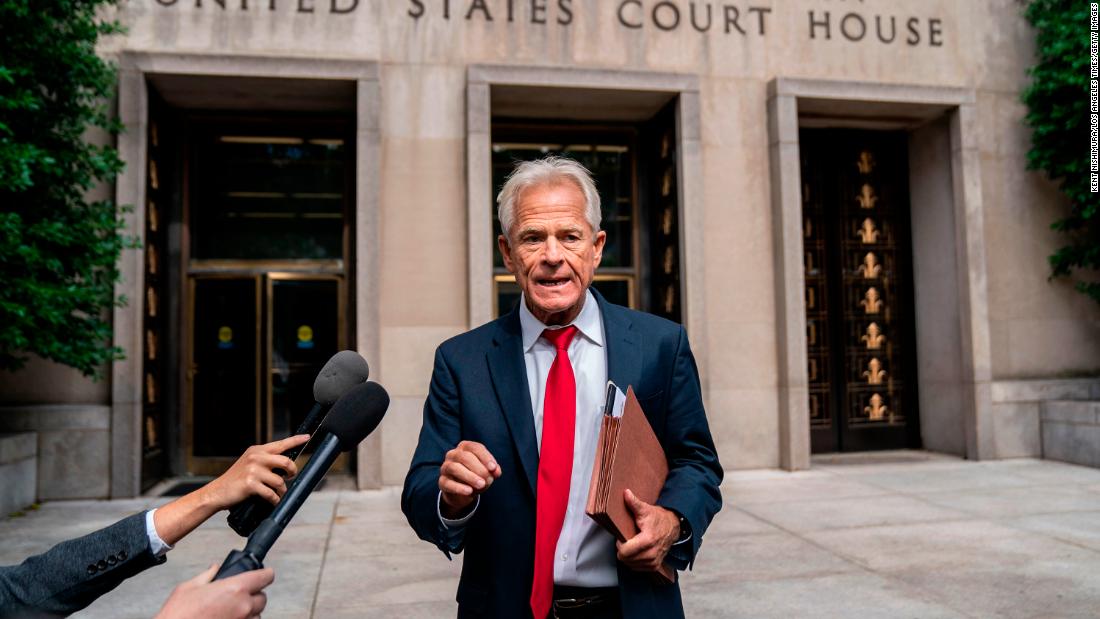 He also continued to speak publicly on Wednesday about his work with Trump around January 6, while still refusing to provide that information to the House select committee investigating the US Capitol attack.

Navarro has said he plans to represent himself in court. Also Wednesday, prosecutors from the Department of Justice asked for a protective order barring Navarro from disclosing any evidence he receives in the case, especially because he continues to do media appearances about his situation, creating a potential “carnival atmosphere.”
“Clearly, the prosecution’s strategy is to take advantage of an individual without adequate representation,” Navarro said in a letter to the judge, Amit Mehta of the DC District Court, that was made public in his case file. “My very freedom here is at stake and I ask for the court’s understanding that it will take time both to find the appropriate representation and time to develop an appropriate legal strategy.”

In an interview on Fox News Wednesday afternoon, Navarro said hiring a lawyer would cost so much, he would lose his retirement savings.

“This is going to cost a half a million dollars, from what I’m being told,” he said. “I’ll be eating dog food if I stay out of jail.”

On Fox, Navarro again spoke about what he believed was Trump’s thinking around January 6 — saying the President and Steve Bannon did not want violence.

Navarro has said he refuses to comply with House subpoenas seeking information about his interactions with Trump because he has immunity, and emails from Pence advisers that are now public make clear Trump advisers knew he would refuse to do what they wanted.

Bannon is also facing contempt charges for failing to testify to the House or turn over documents and has pleaded not guilty.

The Justice Department’s request, if granted, could shut down Navarro’s ability to speak as freely about his charges. However, the DOJ is not asking for a so-called gag order at this time.

Navarro’s interviews so far “demonstrate a substantial risk that, without a protective order, the Defendant will use non-public discovery for improper purposes instead of to prepare the defense he plans to present before this Court,” prosecutors from the DC US Attorney’s Office wrote on Wednesday. “The Defendant has demonstrated through his public statements that he intends to litigate the merits of the pending charges in the press.”

The prosecutors also described in the court filing the types of evidence they’ve collected for Navarro’s contempt case. That includes witness interviews with law enforcement and before a federal grand jury, communications between Navarro and others who are unnamed at this time, and information about Navarro’s phone and email accounts.