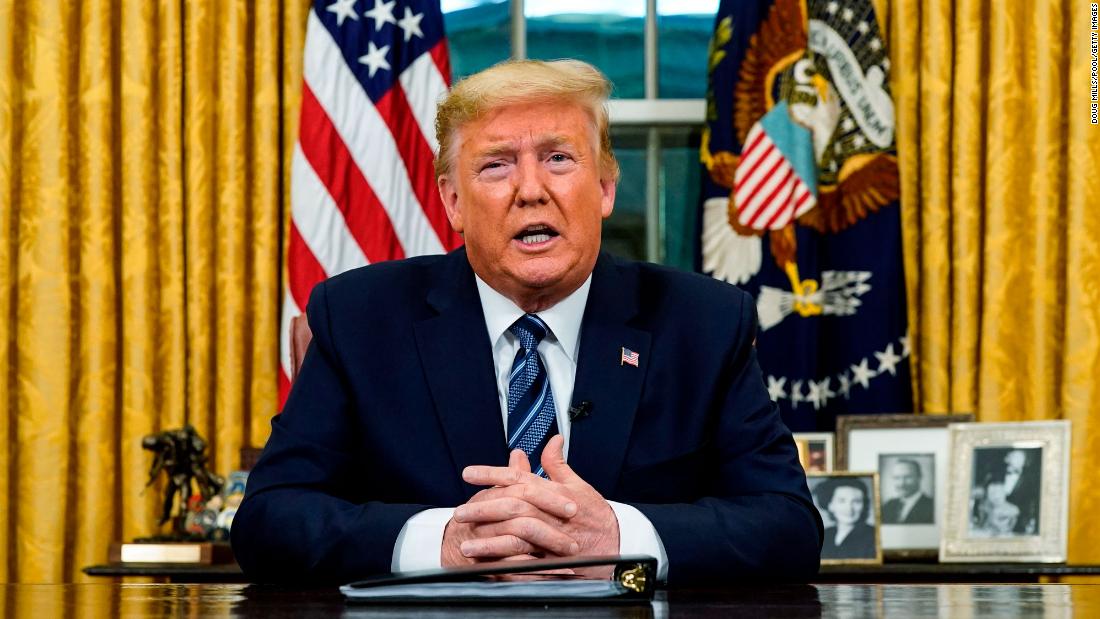 “It will probably, unfortunately, get worse before it gets better,” Trump read grimly from a script during a subdued news conference on Tuesday, looking up from the podium to concede the gloom didn’t exactly come naturally: “Something I don’t like saying about things, but that’s the way it is.”

The President and his team had discussed the warning that morning, people familiar with the matter said, recalling an earlier moment in the pandemic when a similar dose of real-talk provided Trump a boost. Doing it again could help mark a turning point for a badly wounded president, advisers reasoned.

The admission became the first in a series of remarkable about-faces this week for a President ordinarily loath to course correct. After spending the last month in denial about the worst health crisis in a century and downplaying a surge in coronavirus cases by falsely claiming it was artificially juiced by increased testing, Trump this week — prodded by aides and sinking poll numbers — has tried to show Americans he is taking the pandemic seriously.

He has finally joined public health experts in calling masks effective and taken to carrying his navy blue mask around in his pocket to urge Americans to wear them. He acknowledged Thursday that some school districts may need to delay reopening, though he still wants students in classrooms come soon. And on Thursday he finally abandoned his demand for a crowded in-person convention, canceling activities in Jacksonville, Florida, after advisers suggested the turnabout would demonstrate leadership.

The White House insisted Friday nothing had changed.

In truth, Trump’s retreat came only after aides showed the President a series of crushing polls showing him not only trailing the presumptive Democratic nominee Joe Biden nationally and in must-win battleground states, but also revealing that a growing majority of Americans disapprove of his handling of the pandemic.

“I think he is finally starting to get it,” one Trump adviser said, pointing to Trump’s recognition of his dire political standing and the pandemic’s reality. “But can he do this for the next 100 days? I think if he does, he wins.”

The shift comes too late to erase the months Trump spent in denial — both on his convention and on the virus itself. Canceling events and bowing to facts now aren’t going to contain a virus that, partly because of some of Trump’s actions and decisions, is still spreading out of control.

But it is striking after months of charging ahead with reopening and downplaying the science to now hear Trump tell a Fox News interviewer: “We’re setting an example. We don’t want to have people so close together.”

Trump is now trailing Biden by double digits with an average deficit of 12 percentage points, according to a CNN average of recent national polls. A series of Fox News polls this week showed Biden handily leading Trump in the battleground states of Pennsylvania, Michigan and Minnesota. And a Washington Post-ABC News poll showed that just 38% of Americans approve of Trump’s handling of the pandemic — with 60% disapproving. 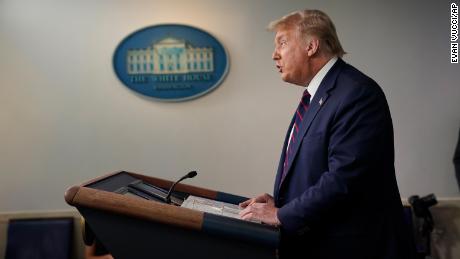 Armed with those and similarly concerning internal poll numbers, Trump’s political advisers and White House aides have urged Trump in recent weeks to take surging cases of the virus more seriously, warning him that his political prospects were increasingly linked to his handling of the pandemic.

Trump, who once declared himself a “wartime president” earlier in the pandemic, had resisted those entreaties because he felt reassuming that role would act as tacit acknowledgment his attempts to contain the virus had failed. Instead, Trump remained insistent in meetings with aides that his focus should remain on the economy and on unrelated issues like restoring order to American streets using federal law enforcement officers.

But the numbers kept falling and people close to the President warned that even a campaign staff shakeup could not alone salvage what was becoming an increasingly doomed reelection effort.
Meeting with his campaign manager Bill Stepien and RNC Chairwoman Ronna McDaniel this week, Trump stared down that political fact coupled with the growing challenges of holding an in-person convention in a state where coronavirus cases have been skyrocketing. The aides told Trump he could move forward with the convention, but that canceling would be an opportunity to show leadership in the face of the pandemic, two Republicans familiar with the matter told CNN.

One Republican said Trump was finally being “responsible” after pushing RNC and Trump campaign officials for weeks to deliver a packed in-person convention.

But others questioned why Trump had pushed the issue for months when the health concerns were obviously not abating. One convention official described to CNN “a multimillion dollar debacle” in moving the event from North Carolina to Florida — only to cancel for the very same reasons it was moved in the first place.

“I thought I had an obligation not to have large numbers, massive numbers of people crowded into a room,” Trump said during his interview on Fox.

Still, even as Trump is now bowing to coronavirus reality, he has not abandoned his stubborn push for reopening and his tendency to make misleading statements to try and spin a rosy outlook.

While he acknowledged that some school districts might need to delay their reopening, Trump this week continued to pressure schools to return amid an uncertain environment, falsely claiming that children do not spread the virus as much as adults.

That seemed to be directly contradicted by the White House’s top health expert the next morning.

“We certainly know that children under 10 do get infected. It’s just unclear how rapidly they spread the virus,” Dr. Deborah Birx said on NBC’s “Today.”

And he has continued to favorably compare the US to the rest of the world, even though most of Europe and Asia have significantly reduced their coronavirus outbreaks and are not experiencing a second surge like the US.

While previous iterations of the coronavirus briefings would have included a cast of health experts ready to correct the President or provide more fact-based assessments, Trump has chosen to appear solo during his events this week.

He insisted on Wednesday that was designed to keep the briefings “concise,” but Trump has privately chafed at being corrected by his advisers, chiefly Dr. Anthony Fauci, the well-regarded infectious disease specialist.

Trump’s frustrations with Fauci had become more obvious in recent weeks as White House aides piled on, distributing a list of all the times they claimed he’d been wrong.

But given a chance to ding Fauci again on Thursday when asked by Fox News’ Sean Hannity about his past stance on masks, Trump demurred.

“These same experts were saying, don’t wear it, at one point,” he said. “Now they’re saying wear it. So let’s go with them. What difference does it make?”