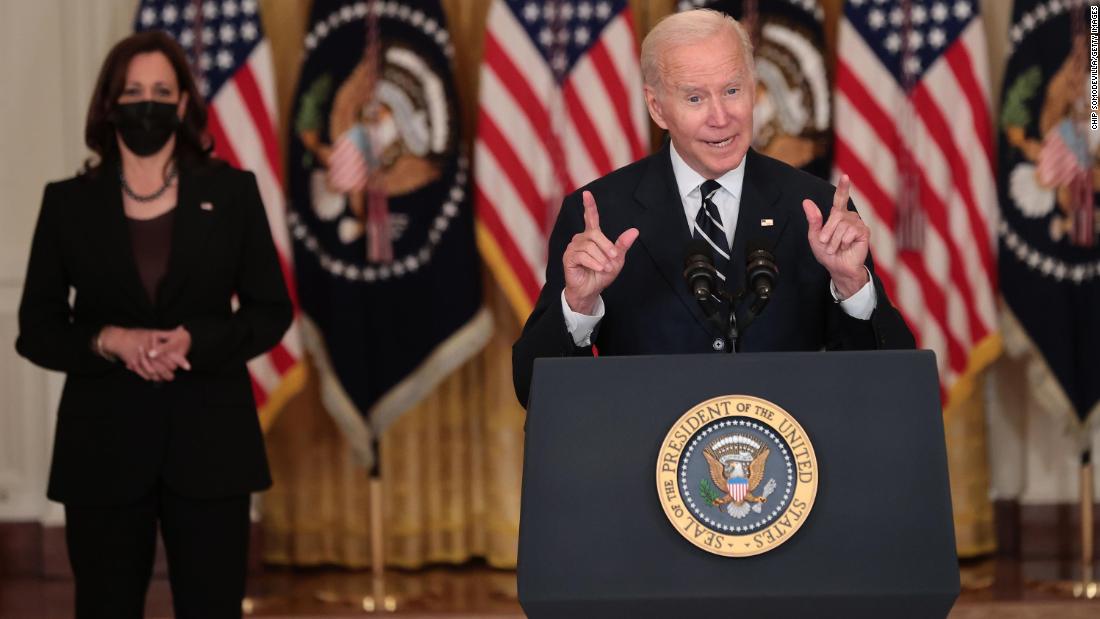 The problem for party leaders is that progressives made clear they would not vote for the infrastructure bill unless the larger bill moves in tandem and said a framework was not enough to win their votes. That bill has not yet been finalized or publicly signed off on by all Senate Democrats.

Delaying the infrastructure vote is a significant setback for Democrats with Biden making clear privately for more than a week he wanted an agreement and passage of the bipartisan measure before he arrives at a UN Climate Conference on November 1. Biden departed for his foreign trip later in the day on Thursday.

This is the second time in two months that House leadership has had to delay the infrastructure vote after a similar scenario played out at the end of September. For now, it’s unclear how long the vote on the bipartisan infrastructure bill will be delayed.

Amid resistance from progressives over moving ahead with the infrastructure bill, the House instead voted Thursday night to approve a short-term extension of highway funding.

The transportation bill vote was needed to avoid a lapse in funding for transportation projects starting Monday. The Senate agreed by unanimous consent that once the House passed the extension, it would be deemed passed by the Senate as well.

House Majority Leader Steny Hoyer’s office sent a notice that the transportation extension vote would be the last of the week.

Hoyer later told reporters that “yes” he is disappointed they weren’t able to vote on the infrastructure package today.

Asked if it would take until December 3 to pass it, which is when highway funding would lapse after the stopgap was passed, Hoyer said, “no, I don’t think,” it will take that long.

On when they will finally vote on the infrastructure bill, he said, “I hope soon.”

During the closed-door meeting with House Democrats, Biden laid out in person long-awaited details of his $1.75 trillion economic and climate package, trying to convince progressives who are skeptical of anything short of a fully written bill and commitments from all 50 members of the Senate Democratic caucus to back his framework.

While Biden’s proposal isn’t finalized in its entirety, days of negotiations have brought it to a place where the key elements are all locked in.

The personal pitch to House Democrats marks a concerted effort by the President to wrest control of an unwieldy process that has led to significant revisions to Democratic goals in the effort to secure the support of centrist Sens. Joe Manchin of West Virginia and Kyrsten Sinema of Arizona.

Not all Democrats have signed off on the framework that Biden announced Thursday morning, two people familiar with the plan cautioned, but the President believes it’s a consensus all Democrats should be able to support.

Neither Manchin nor Sinema explicitly committed to backing the plan Thursday, though they both said they were continuing to negotiate after Biden’s meeting with House Democrats.

Sinema reacted to the framework by saying in a statement, “We have made significant progress” and “I look forward to getting this done.”

Manchin was noncommittal when asked by reporters whether he will support the framework agreement. Later on Thursday, he said, “We haven’t seen the text yet. Everyone has to see it. I don’t think anybody could say they could support it until they see the text.”

Notably, however, Manchin signaled support for a $1.75 trillion top line for the package.

Asked by CNN if that price was too high, he said, “No,” adding, “That was negotiated.”

This is the first public indication that Manchin will accept a price tag higher than $1.5 trillion, which he had previously said was the figure he was willing to settle on.

Congressional Progressive Caucus Chairwoman Rep. Pramila Jayapal of Washington state emerged from the meeting with Biden telling reporters that she did not think the framework was enough to get progressives on board.

“I would say nothing different than what I what I knew before,” she said.

Jayapal later said after a separate meeting with House progressives, “We had a very spirited and engaged discussion,” and said that “everyone in the room enthusiastically endorsed a resolution that approves in principle the framework the President laid out today.”

“We intend to vote for both bills when the Build Back Better Act is ready,” she said, referring to the larger climate and economic package. But, she added, “we do need the vote on both bills in the House at the same time.”

Vermont independent Sen. Bernie Sanders told CNN there should not be a vote on the infrastructure bill Thursday.

“Well, I think it shouldn’t come up,” Sanders said. “I think both of the bills are linked and I think the House of Representatives has a right to know before they sign off on the infrastructure bill that the 50 senators are prepared to support a strong reconciliation.”

Senate Democrats cannot afford to lose a single vote to pass the bill under a process they plan to use known as budget reconciliation.

That dynamic has given every single member — and in particular, moderates including Manchin who have pushed back on a number of the original proposals for the package — an outsized influence over the process.

After his visit to Capitol Hill, Biden delivered public remarks on the framework.

“Today I’m pleased to announce that after months of tough and thoughtful negotiations, I know we have a historic economic framework,” Biden said.

“It’s a framework that would create millions of jobs, grow the economy, invest in our nation and our people, turn the climate crisis into an opportunity and put us on a path not only to compete, but to win the economic competition for the 21st century against China and every other major country in the world,” he said.

Biden later left for Europe for the Group of 20 Summit in Rome. Climate is a topic Biden is expected to discuss Friday morning during an audience with Pope Francis in a historic meeting. Later, he plans to deliver a major climate speech when visiting the COP26 summit in Glasgow.

The trip presents a major moment on the world stage for the President that has added urgency to the push for a deal and a House infrastructure vote.

What’s in the framework

The $1.75 trillion proposal focuses on care for families, addressing the climate crisis, expanding access to health care, lowering costs for the middle class and tax reforms.

It does include provisions to help families with childcare and caregiving, including free and universal preschool for all 3- and 4-year-olds, which amounts to the biggest expansion of public education in 100 years, according to the White House.

The largest portion of the framework focuses on climate and would include the largest legislative investment in combating climate change in US history, according to the White House. As part of that, there would be $320 billion for clean energy tax credits. This includes 10-year expanded tax credits for utility-scale and residential clean energy, transmission and storage, clean passenger and commercial vehicles and clean energy manufacturing.

This story and headline have been updated with additional developments Thursday.