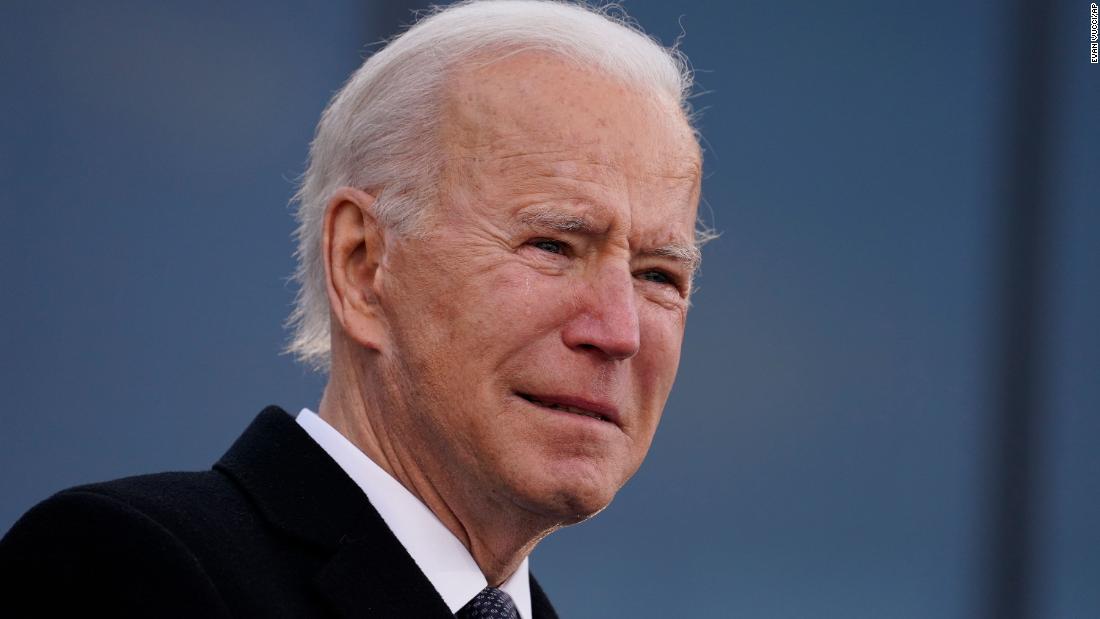 As he departed for the nation’s capital, Biden gave an emotional farewell to his home state of Delaware, his voice breaking at times as he thanked the state’s residents for believing in him and standing with him throughout his career.

“I’ll always be a proud son of the state of Delaware,” Biden said at the Delaware National Guard headquarters in New Castle County. “Excuse the emotion,” he said, tears streaming down his face, “but when I die, Delaware will be written on my heart and the hearts of all of us — all the Bidens. We love you all. You’ve been there for us in the good and the bad.”

He gave a moving tribute to his son Beau, who died of brain cancer in 2015 at the age of 46, stating that he had hoped to see his son become president one day.

“We should be introducing him as president,” he said.

When Biden announced his run for the presidency in 2019, he said he was inspired to seek the nation’s highest office after watching President Donald Trump’s dismissive handling of the deadly White supremacist rally in Charlottesville, Virginia, when he said there were “very fine people on both sides.” Now intent on healing a deeply fractured country, Biden’s task has never seemed more daunting after Trump incited a riot with his lies that the presidential election was stolen, which led an armed mob to storm the Capitol on January 6 and resulted in the deaths of five people, including a Capitol Police officer. On Tuesday, Senate Majority Leader Mitch McConnell said that the mob was “provoked” by Trump, in a remarkable final rebuke of the President after four years in which Republicans have often stayed silent in the face of the President’s misdeeds.

“The mob was fed lies,” McConnell, a Kentucky Republican, said on the Senate floor Tuesday. “They were provoked by the President and other powerful people, and they tried to use fear and violence to stop a specific proceeding of the first branch of the federal government which they did not like.”

But McConnell noted that democracy had prevailed, even in the face of violent threats, and that Congress carried out its duties by certifying the election: “We’ll have a safe and successful inaugural right here on the very front of the Capitol,” he said.

McConnell argued that the November election “did not hand any side a mandate for sweeping ideological change,” given the closely divided Senate and House. But he said Republicans would seek common ground with Democrats as Biden takes office: “We are to pursue bipartisan agreement everywhere we can, and check and balance one another, respectfully, where we must.”

Biden had hoped to infuse his arrival in Washington with a nostalgic twist by riding the rails from his home in Delaware, but that was deemed too much of a security risk at a time when the nation is facing threats from within. Instead the President-elect will arrive in a capital city Tuesday that has been transformed into a fortress with more than 20,000 National Guard troops securing the streets and protecting buildings that symbolize the enduring history of democracy in this country, which has seemed very much in peril in recent weeks.
With the twice-impeached Trump still prowling the White House — fuming about his election grievances and upcoming trial in the US Senate as he prepares to leave for Palm Beach, Florida, before the new President is sworn in Wednesday — Biden hopes to shift the nation’s attention to his agenda for halting the Covid-19 pandemic, accelerating the troubled vaccine rollout and rebuilding a struggling economy that has left millions unemployed.

Before tackling those challenges, Biden’s first stop in Washington, DC, will be at a memorial honoring the nearly 400,000 Americans who have died from Covid-19, with 400 lights illuminating the Lincoln Memorial Reflecting Pool. Hundreds of towns, cities and communities across the country plan to join in the solemn tribute with lighting ceremonies of their own at buildings from the Empire State Building in New York to the Space Needle in Seattle, Washington.

Biden will be joined by his wife Jill Biden, Vice President-elect Kamala Harris and her husband Doug Emhoff. Cardinal Wilton Gregory, the archbishop of Washington, will deliver the invocation and gospel singer Yolanda Adams will perform “Hallelujah.”

The President-elect has been working on the inauguration speech that he will deliver at the US Capitol on Wednesday, which will mark the beginning of his effort to unite the country after four dark and tumultuous years under Trump, who is skipping the ceremony.

The Covid-19 pandemic had already forced organizers to reimagine the day’s ceremonies, including the traditional swearing-in of the new president on the West Front of the Capitol. Those plans were complicated by the January 6 siege of the Capitol by Trump supporters, who shattered glass and ravaged the historic building, forcing the Secret Service to keep plans in flux to ensure that traditional transfer of power will transpire peacefully and safely. In that unnerving environment, the military has been intensely vetting the National Guard troops to make sure there are no bad actors who would do harm during this week’s ceremonies.

With Trump’s decision to duck out of Washington Wednesday morning to fly to Florida, he has dispensed with both with the traditional welcome of the incoming President and first lady at the North Portico and the joint ride over to the Capitol for the ceremony.

Instead, Trump took the unusual step of asking staff to arrange a sendoff of his own at Joint Base Andrews, suggesting that he’d like to see a red carpet, a Color Guard and a 21-gun-salute.

The inaugural parade down Pennsylvania Ave to honor the incoming administration will now be replaced by a virtual one. Accompanying Biden and Harris as the presidential escort from 15th Street to the White House will be the US Army Band, a Joint Service Honor Guard and the commander in chief’s Guard and Fife Drum Corps. The University of Delaware Drumline and the Howard University Drumline will also participate in a nod to the alma maters of the incoming president and vice president.

Participants in Wednesday’s virtual parade, which will be hosted by “Scandal” actor Tony Goldwyn (who played the show’s President of the United States), will feature comedian Jon Stewart, New Radicals and DJ Cassidy’s “Pass the Mic” with performances by Earth Wind & Fire, Nile Rodgers, Kathy Sledge, The Trans Chorus of Los Angeles, The Washington Chorus and The Triumph Baptist Church Choir.

The parade will also include Americans who sought to lift spirits in the midst of the pandemic including Dr. Jason Campbell — a Portland doctor who became known as the “TikToc Doc”with his uplifting dance performances in scubs from the hospital — and Jason Zgonc, a 12-year-old trumpeter from Atlanta who played during hospital workers’ break times throughout the summer.