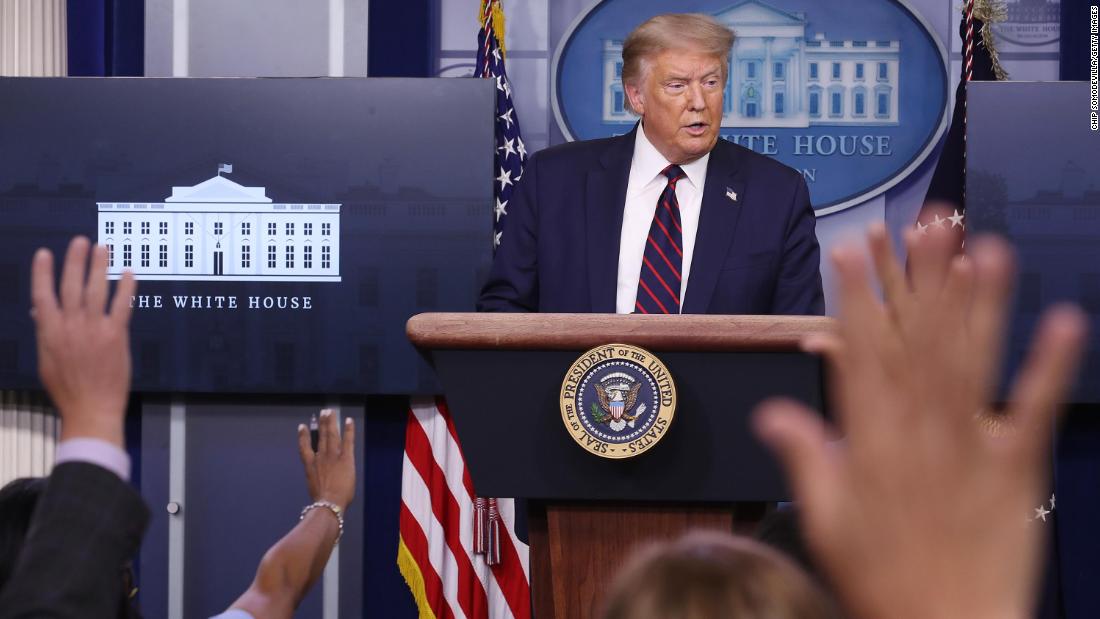 The President’s late afternoon appearance in the White House briefing room was designed to project a more commanding role for Trump, who has largely been absent in discussing the health crisis ravaging the country and has seen his poll numbers plummet as a result.

In a press conference that lasted around 30 minutes, Trump again said he believed the virus would disappear and insisted the American response to the pandemic was “much better” than in other places.

But he also offered more realistic projections that his advisers hope will make him appear like a sober-minded leader.

“It will probably unfortunately get worse before it gets better,” Trump said — echoing a prediction he made at the start of April of a “rough” two weeks ahead.

And he continued offering belated encouragement to wear masks, at one point pulling out his navy blue face covering and claiming he had no problem strapping it on (though he did not during the briefing).

“Whether you like the mask or not, they have an impact,” he said, adding later: “I’m getting used to the mask.” 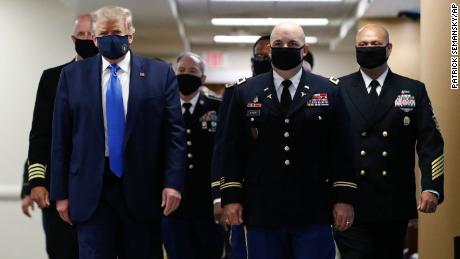 Trump appeared from the podium by himself, unaccompanied by any of the health experts who comprise the White House coronavirus task force. About an hour before Trump stepped before cameras, Dr. Anthony Fauci said on CNN that he hadn’t been invited to participate.

A person familiar with the matter said Fauci had initially been expecting to appear at the press conference. But White House aides signaled on Monday and Tuesday that the revived presidential briefings were unlikely to include administration officials.

Asked why that was, Trump insisted Tuesday that another of the White House coronavirus task force experts, Dr. Deborah Birx, was standing “right outside” listening.

In bringing the news conferences back, Trump and his aides are hoping to avoid the angry outbursts and meandering tangents that became a hallmark of their first go-around earlier in the pandemic.

They weren’t able to completely avoid unfortunate distractions on Tuesday; asked about Ghislaine Maxwell — who faces charges of recruiting, grooming and ultimately sexually abusing minors — Trump said he “wished her well” and recalled meeting her and her partner Jeffrey Epstein in Palm Beach.

Trump also contradicted his press secretary Kayleigh McEnany, who told reporters during her own briefing earlier in the day that Trump is sometimes tested for coronavirus multiple times per day.

“I don’t know about more than one,” Trump said. “I do probably on average a test every two days, three days, and I don’t know of any time I’ve taken two in one day, but I could see that happening.”

Still, his news conference did meet aides’ expectation for length, coming in much shorter than some of his earlier forays that stretched close to two hours.

And Trump offered only a flash of grievance about how his response has been covered, unlike sessions from the spring that were mostly filled with complaints about the news media.

“If you watch American television, you think that the United States was the only country involved with and suffering from the China virus,” Trump said. “Well, the world is suffering very badly.”

Whether Trump maintains the relatively sober tone he established on Tuesday remains to be seen, and there remained little indication that a more robust national strategy for combating the virus was in the offing.

Before Tuesday, Trump had largely adopted a strategy of ignoring the pandemic in public. He hadn’t held an event specifically related to the virus in more than two weeks.

That led to a severe drop in his political standing as Americans soured on his handling of the pandemic. The President’s political advisers warned him his approach to the health crisis was damaging him badly.

So on Monday Trump announced he would resume regular public briefings after discontinuing them in April and declaring them a waste of time. Trump is expected to hold the briefings a few times a week, but not on a daily basis like he was earlier this year.

There remains an internal split over whether it’s wise for Trump to take the stage and discuss the virus in a high-profile setting like a White House news conference.

Some aides have reminded others how hard they fought to convince Trump to end the briefings in April when he suggested sunlight and ingesting disinfectants could help cure coronavirus.

Aides debated for weeks bringing back Trump’s briefings — though the President himself was not entirely convinced that resuming them was a good idea, people familiar with the discussions said.

Trump insisted that using his platform to focus exclusively on coronavirus would be a mistake and could signal to the country that his response so far has failed. But top allies — including Vice President Mike Pence, his weekend golf partner Sen. Lindsey Graham of South Carolina and White House counselor Kellyanne Conway — advised him that not appearing in front of the problem was the root of his political woes.

In order to convince him, aides developed a compromise: his briefings could cover a range of topics, not only the pandemic.

Some in the White House communications office have pushed for the briefings to occur in settings outside the White House, like at the headquarters of health agencies, to keep them more narrowly focused. But Tuesday’s was back in its familiar setting: the James Brady briefing room.