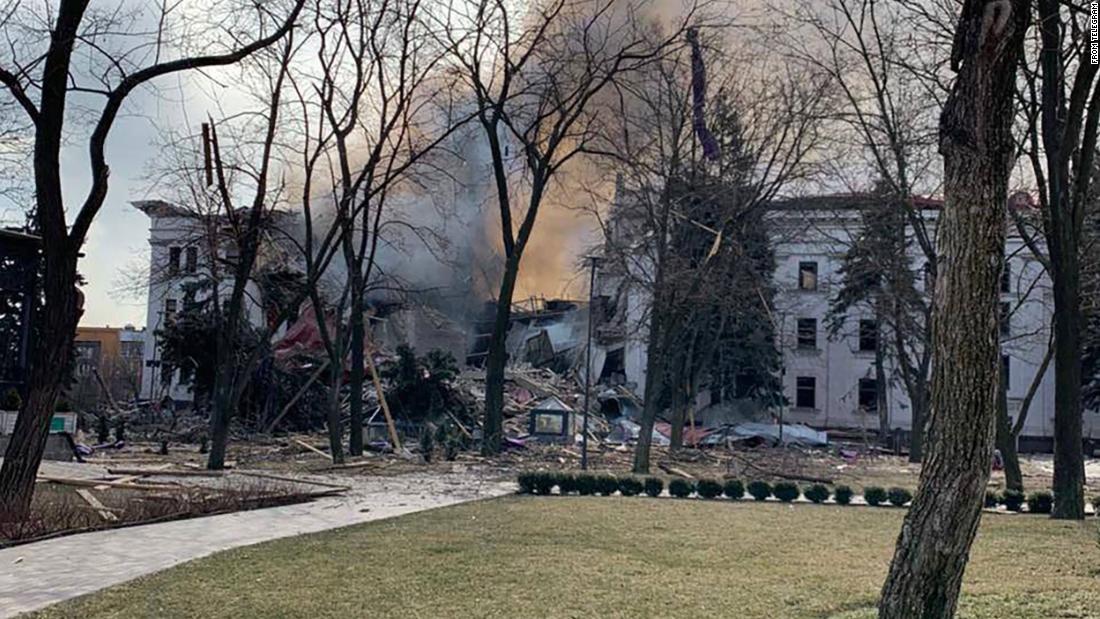 Mariupol City Council, who shared an image of the destroyed building, said Russian forces had “purposefully and cynically destroyed the Drama Theater in the heart of Mariupol.”

“The plane dropped a bomb on a building where hundreds of peaceful Mariupol residents were hiding,” it said.

CNN has geolocated the image and confirmed it is of the theater in the southeastern port city.

Videos of the aftermath showed a fire raging in the theater’s ruins. The number of casualties is unknown, authorities said.

The Drama Theater in Mariupol was attacked on Wednesday. The number of casualties is unknown

“It is still impossible to estimate the scale of this horrific and inhumane act, because the city continues to shell residential areas,” the council wrote on Telegram. “It is known that after the bombing, the central part of the Drama Theater was destroyed, and the entrance to the bomb shelter in the building was destroyed,” it added.

Petro Andruishchenko, an adviser to the mayor of Mariupol, described the theater as the largest shelter “in number and size” in the city’s center. “According to preliminary data, more than a thousand people were hiding there,” he said. “The probability of getting there to dismantle the rubble is low due to constant shelling and bombing of the city.”

The city has no electricity, water, food, with residents melting snow or dismantling heating systems for a drop to drink, he said on Tuesday.

Mariupol has been besieged by Russian forces since March 1. After weeks of failed attempts to establish safe civilian evacuation corridors, about 20,000 people managed to leave the city on Tuesday, Ukraine’s Deputy Prime Minister Irina Vereshchuk said.

“It is impossible to find words that could describe the level of cruelty and cynicism with which the Russian occupiers are destroying the civilian population of the Ukrainian city by the sea. Women, children, and the elderly remain in the enemy’s sights. These are completely unarmed peaceful people,” the city council said.

“We will never forgive and never forget,” it added.

The unfolding humanitarian catastrophe has enraged local officials. “These bastards are trying [to] physically destroy Mariupol and the people of Mariupol, which have been a symbol of our resistance,” Pavlo Kyrylenko, head of Donetsk region administration, said on Facebook Wednesday.

He says the “fate is unknown” of the hundreds of people sheltering in the theater “as the entrance to the bomb shelter is blocked by rubble,” he said.

“The Russians are already lying, [saying] that the headquarters of the Azov Regiment was there. But they themselves are well aware that there were only civilians,” he said.

After Russia bombed a maternity hospital on March 9, its Foreign Minister Sergey Lavrov alleged without evidence that the hospital was the ultra-nationalist militia Azov battalion’s base and that all patients and nurses had left.

A Russian Ministry of Defense spokesperson later denied in a briefing that Russia had shelled the maternity hospital at all, calling it a “provocation.”

Mariupol has been reduced to a battle zone, with the city’s deputy mayor telling CNN on Tuesday that Russia has been bombarding the city with missiles, saying that they counted 22 aircraft on Monday “which were bombing our city, and at least 100 bombs.”

Residents who fled the city have described conditions there as “unbearable” and “just hell.” On Tuesday, shocking drone footage and satellite photos showing rising plumes of thick smoke and destroyed buildings emerged, underscoring the sheer devastation wrought by the Russian bombardment.

As many as 2,500 civilians have died in Mariupol, Ukrainian officials estimate, and hundreds of thousands of people are trapped in the city — with officials warning those who remain are without electricity, water and heat.