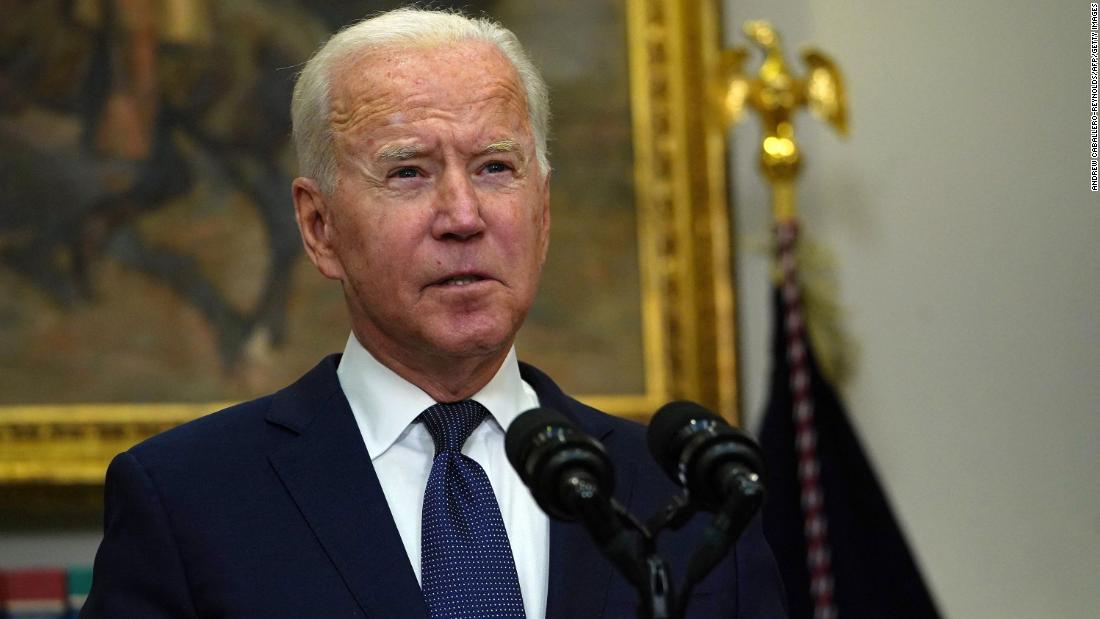 Biden made the decision mindful of the security risks in remaining the country longer, the official said, and he has asked for contingency plans in case he determines at a later date the US needs to remain in the country for longer.

Biden’s aides expected him to discuss the airlift, and potentially explain his decision to leave at the end of the month, on a morning video conference with the heads of the world’s leading democracies.

Biden spoke for seven minutes on the Group of 7 call just after 9:30 a.m. ET, the White House said. He’ll deliver public remarks later in the day.

The crisis talks of the G7 come as the Afghanistan evacuation effort has picked up steam in the past days, now far exceeding the administration’s initial daily goals. The White House said on Tuesday that 12,700 people were evacuated by 37 US military flights and 8,900 were evacuated by coalition flights over the past 24 hours. The Pentagon added that the military has increased the pace of flights out of Kabul to one aircraft every 45 minutes.

In total, the White House says US efforts have facilitated the evacuation of approximately 58,700 people since August 14, and 63,900 since the end of July. Approximately 1,000 Afghans have arrived at Dulles International Airport outside Washington, DC, in the last 24 hours, according to the Pentagon.

The massive logistical undertaking by the American military — which took control of part of Kabul’s international airport, including its air traffic control, in the aftermath of the Taliban takeover — has allowed other countries to evacuate their citizens. If the US withdraws, its unclear whether civilians from any country would still be able to leave.

Despite the massively scaled-up flights, some of Biden’s advisers were worried about US troops’ safety and the potential for ISIS or Taliban reprisals should they stay any longer than August 31. Representatives for the Taliban have called the deadline firm, and said American troops remaining past the date would amount to a “clear violation” of their agreement with the United States.

The administration has remained in daily discussion with the Taliban on security matters, including the end-of-month deadline. The CIA director, Bill Burns, traveled to Afghanistan this week to meet with Taliban leader Abdul Ghani Baradar, according to senior administration officials, who said the US is seeking a clearer understanding of where the Taliban stands on several issues as the clock ticks towards the deadline.

Burns, a seasoned career diplomat, is the highest-ranking US official to meet in person with Taliban leadership since Afghanistan’s civilian government collapsed on August 15.

Some on the President’s national security team warned against an extension. Instead, they pointed to the rapidly sped-up flights out of the country and said they still believe there is time to compete the effort before September.

“We believe that we have time between now and the 31st to get out any American who wants to get out,” national security adviser Jake Sullivan told reporters Monday.

Any extension would have been likely be very brief and focused only on evacuating Americans, according to one official familiar with the matter, who said all contingencies were under discussion. The Taliban has made clear that “our leadership will take proper and necessary decision(s)” should the US stay past August 31, spokesman Sohail Shaheen said Monday.

“August 31 is deadline announced by them,” the Taliban spokesman said. “US must adhere to removing troops from Afghanistan by this date. Otherwise, it will be a clear violation.”

The emergency meeting of the G7 was called this week to respond to the chaotic events in Kabul, where tens of thousands of foreign nationals and Afghan citizens who assisted in the war effort are desperately trying to leave.

Britain and France in particular are pressing Biden to leave troops in country for an extra few days, arguing it would still allow him to meet his original 9/11 withdrawal date for US forces. They are hoping Biden agrees, and believe it would amount to a show of goodwill after his decision to withdraw from Afghanistan caused strain in US alliances.

Even some US Democrats agree; House Intelligence Chairman Adam Schiff emerged from a classified briefing with intelligence officials on Monday pessimistic the Biden administration will be able to meet its goal of evacuating all Americans and its allies from Afghanistan by August 31, saying that was “very unlikely.”

“It’s hard for me to imagine all of that can be accomplished between now and the end of the month,” Schiff said, adding he was worried about the terror threat to the airport.

There is another all-member House briefing on Afghanistan scheduled for Tuesday morning. Top members of Biden’s national security team, including the secretaries of State and Defense, will brief lawmakers. That group was also due to brief Biden at the White House.

G7 members also planned on Tuesday to discuss whether or when they should jointly recognize the Taliban as Afghanistan’s government, western officials familiar with the planning told CNN. Any decision on whether to recognize the Taliban would come with enormous consequence that could be used as leverage to compel the group to respect human rights, the officials said.

British Prime Minister Boris Johnson, who is hosting the meeting as the current G7 president, is advocating for a unified approach to the Taliban, according to western officials. He wants the world’s leading democracies to come up with a plan on how to recognize the government or potentially apply economic sanctions or withhold aid.

So far no governments have recognized the Taliban as the official government of Afghanistan. Doing so could allow the country access to previously committed foreign aid. Non-G7 powers like China and Russia have also been in contact with the Taliban.

Biden has said he wants to see “harsh conditions” applied to the Taliban, particularly in how they treat women and girls, before lending their government legitimacy. He said Sunday he was open to applying sanctions.

Tuesday’s G7 call is also expected to include the Secretaries General of NATO and the United Nations. Both organizations are expected to play a role going forward in Afghanistan.

The Pentagon has advised Biden he must decide by Tuesday in order to leave enough time for troops and equipment to leave the country by the end of the month, according to officials familiar with the matter.