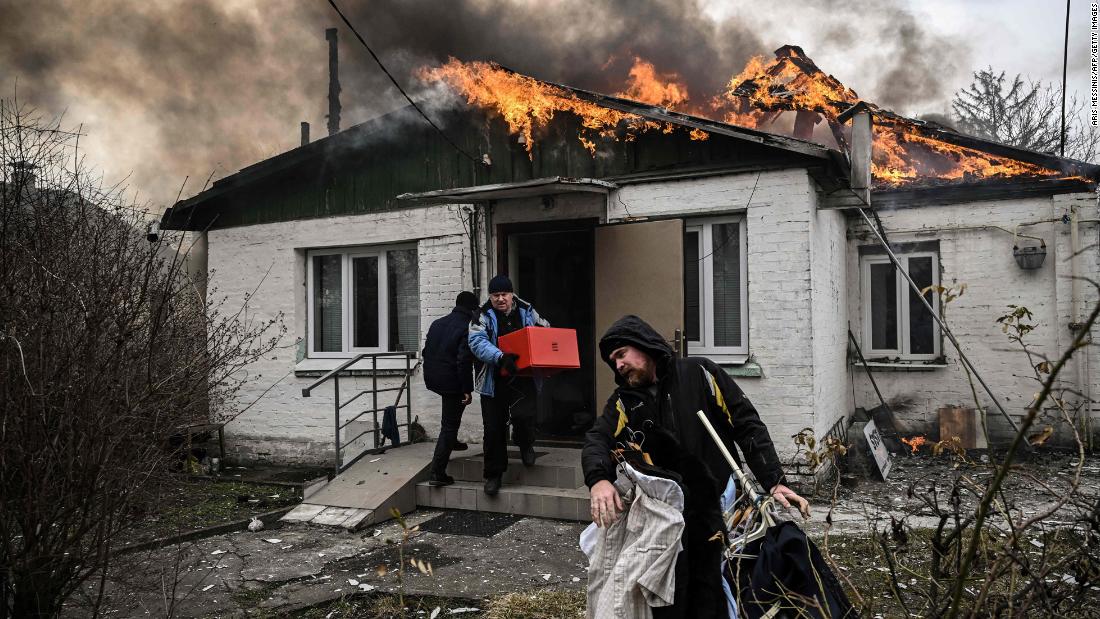 Inna Sheremet remembers fondly walking her dog every day in the forests of Bucha, having lived in Ukraine her entire life.

“I packed my things, took the dog and left,” Sheremet told CNN, escaping before her fifth-floor apartment was shelled and destroyed.

The life she once led — visiting friends, grilling kebabs next to her house, cycling around the city — was gone. “My whole life before the war is destroyed,” Sheremet said. “All I have left is a small bag of clothes and a dog.”

Inna Sheremet captures life on a sunny day in Bucha before the invasion. Credit: Inna Sheremet

Bucha, in Kyiv Oblast, is one of many cities devastated by the unprovoked Russian invasion of Ukraine. Everyday scenes of commuting to work and hanging out with friends on weekends have been replaced with the horrors of war, as millions are forced to flee or seek shelter.

“A few small towns just don’t exist anymore,” Ukrainian President Volodymyr Zelensky said on March 12. “And this is a tragedy. They are just gone. And people are also gone. They are gone forever. So we are all on the front line.”

CNN spoke with those who have had their entire lives uprooted since the war began more than a month ago. Their stories of the scarred landscapes where their hometowns once stood show how much has already been lost. But also what they’re fighting to protect, as Ukrainian forces continue to defy the Russian advance. Here’s what they have to say.

The town square at night in front of Irpin City Council, before the war began. Credit: Mariana Ianovska/Adobe Stock

Thirteen years ago, Olga Dobrelia moved to Irpin just as the city was transforming from a small resort town to a haven for many families and young professionals just 30 minutes outside of the capital Kyiv. Dobrelia raised her family there, knew the best spots for coffee and where to find wood-fired pizza.

“We loved and will love our Irpin at any time of the year,” she told CNN. “Even after the war.”

Russia began its attack on the city during the early stage of the invasion, with missile strikes and frequent bombardments resulting in widespread destruction.

Dobrelia described sheltering in the basement of her home as nearby explosions “gave such an echo that the earth shook under our feet.”

“The children cried and were afraid to even move back into the house.” Her family soon fled, driving south to the Cherkasy region several hours away.

The city, meanwhile, has continued to see intense fighting.

“When the enemy equipment is reloaded, people run out of the shelter and have the opportunity to inform their relatives that they are alive or ask for help. And sometimes they try to heat the water on a bonfire,” said Dobrelia. “Terrible life.”

A residential building in Borodyanka destroyed by Russian shelling after the invasion. Credit: Maksim Levin/Reuters

Within a week of the invasion, the residential area of Borodyanka on the outskirts of Kyiv was under heavy attack.

There was constant Russian shelling, and a large apartment block was obliterated in a missile strike. “There is no Borodyanka,” Oleksiy Kuleba, head of Kyiv’s Regional State Administration, said on March 5. “It is almost completely destroyed. The city center is just awful. Borodyanka is under the influence of Russian troops; they control this settlement.”

Just before the war broke out, a man named Victor told CNN that he texted an acquaintance he had a bad feeling. CNN has agreed to use only his first name to protect his privacy.

Victor stayed at work and kept in touch with his wife and children, who he says are hiding from the Russians without light, water, or food, trying to survive as best they can.

“We have witnessed the vilest invasion,” Victor said. “We hold on, we hope that our army and those who help us will be able to stop Putin in Ukraine so that this merciless fire does not spread to Europe.”

Olena Smolych and her family first fell in love with the “picturesque” village of Moschun after visiting friends there.

They picked mushrooms in the forest and visited a nearby stable to teach their 4-year-old son how to ride a horse. And eventually, they finished building the family home of their dreams. When the war began, they thought Moschun might be spared from the brunt of the conflict due to its remoteness.

“We weren‘t going to leave,” Smolych said. “We considered Moschun safer than Kyiv and that in the event of a shortage of water supply and electricity supply, it would be easier to survive in the village.”

But the distant sound of shelling could be heard at all hours after the war began. “The sound was strong and our child was very frightened. On the second day of the war, we decided to leave, just to take the child away from the sound of shelling, which was still far away.” While she and her family fled to western Ukraine, her mother and brother stayed in Moschun, believing it would be safer.

On the second day of the war, water was cut off, Smolych said. The next day, the gas was gone. Communication with her mother and brother was lost on day nine, and only on the 19th day were they rescued by the soldiers of the Armed Forces of Ukraine.

“Heavy artillery destroyed houses in the village continuously, rifle battles were fought in the streets and in the forest,” Smolych said. “They lived in this horror for 19 days without heat, electricity, communication and gas.”

According to their estimates, around half of the village is now in ruins, Smolych said. Satellite images from Maxar Technologies on March 14 showed that nearly every house in the northwestern side of the village had sustained significant damage.

A spring day in 2020 outside of the Chernihiv Philharmonic Centre for Festivals and Concerts. Credit: Koshmal Victor/Ukrinform/Future Publishing/Getty Images

Chernihiv is a city with a long history, with churches that date back to the 11th century. Victoria Aryshchenko spent her life there — it’s where she was born, where she went to school, and where she began her career.

“I love the city for its large number of parks,” she told CNN. “There are pedestrian streets with cafes and restaurants. There was a stadium. A clean city beach. Lots of sport grounds. Theaters and philharmonics.”

But the peace of the city would soon be shattered as Russian attacks began. Aryshchenko says she was awakened by distant sound of explosions around 5 a.m. on February 24, but life otherwise went ahead as normal.

Until the next day.

“When rockets hit our houses at night and the windows were blown out, we realized what it all meant for us.” Aryshchenko said the city was without heat, electricity or water. Some didn’t even have gas. Food is scarce, with queues up to 3 hours long if something does open.

“Now we live from siren to siren, especially in the dark, when nothing is visible and it is not clear from which side the danger can come.”

She described how the Russian shelling was becoming more frequent in areas where people would normally gather. Since there is no agreed evacuation corridor, she said people flee the city at their own risk in private cars.

“At the moment I am at home. We are already accustomed to and spend our days at home despite the fact that the fighting is underway. At night, when there is a threat from the sky, we hide in the basement of our building.”

An aerial view of Yakivlivka in the Kharkiv region before the invasion. Credit: Pavel Babeshko

Yakivlivka has been left devastated by the Russian bombardment. Credit: ITNHomes and other buildings were obliterated in Yakivlivka. Credit: ITN

Yakivlivka is known as a quiet village just south of Kharkiv in northeastern Ukraine. It was where Elena Guzenko said she often went for a walk, or to visit the graves of relatives. She also collected clean water there in the spring.

“There is beautiful nature there, in the center of the village there is a pond. Local residents worked hard to build and maintain it. A little more than 10 years ago, a beautiful wooden church was built. The whole district took a ride to look at it,” she said. “After the Russian bombing, it is now broken.”

The small village was devastated by what locals say were four Russian air strikes. Reports and videos show houses obliterated and residents working to clean up the area despite no aid arriving.

“War and shelling divided life into before and after!” Guzenko said. “So many dead, so many houses destroyed!”

Ukrainian emergency employees work on March 9 at the side of a maternity hospital damaged by shelling. Credit: Evgeniy Maloletka/AP

Previously home to more than 400,000, Mariupol was once a peaceful city, full of parks, squares and fountains. But once war began, gathering places became the target for Russian attacks.

With each day, basic services such as water, gas, power and communications were severed as attacks grew closer. A maternity hospital and school were bombed, acts widely condemned as war crimes, as was a theater where hundreds of families were taking shelter — killing an estimated 300 people, according to the city council.

“We learned to distinguish between the sounds of large artillery pieces, hailstones and the fall of bombs,” Tatyana Buli, director of the Kuindzhi Art Museum, told CNN.

On March 10, Buli said a Russian aerial bomb exploded near their home. The windows in their apartment were blown out and their car was damaged in the explosion wave. The next day, a shell flew into the hallway of their building.

Buli eventually fled with her family to safety days later as the fighting continued. “Our neighborhood essentially didn’t exist,” she said. “It was erased.”

Mariupol remains under siege — with recent reports showing the situation continues to deteriorate, as more residential buildings are destroyed, and debris piles up in the streets.

Ivan Kuznetsov, born and raised in Mariupol, was in Kyiv during the onset of the invasion. He left his day job and signed a contact with the Armed Forces to become a part of the Territorial Defense of Kyiv, helping to evacuate civilians, fortify buildings and assist the military in the event of Russian breakthroughs.

Kuznetsov has not heard from family members still in Mariupol, including his mother and 90-year-old grandmother, since March 2.

“The last thing I heard from my family was there was no light, water or heat in the house, it‘s hard for me to imagine the conditions there are in now, given that it‘s still cold at night, but what I saw … is horrifying.”