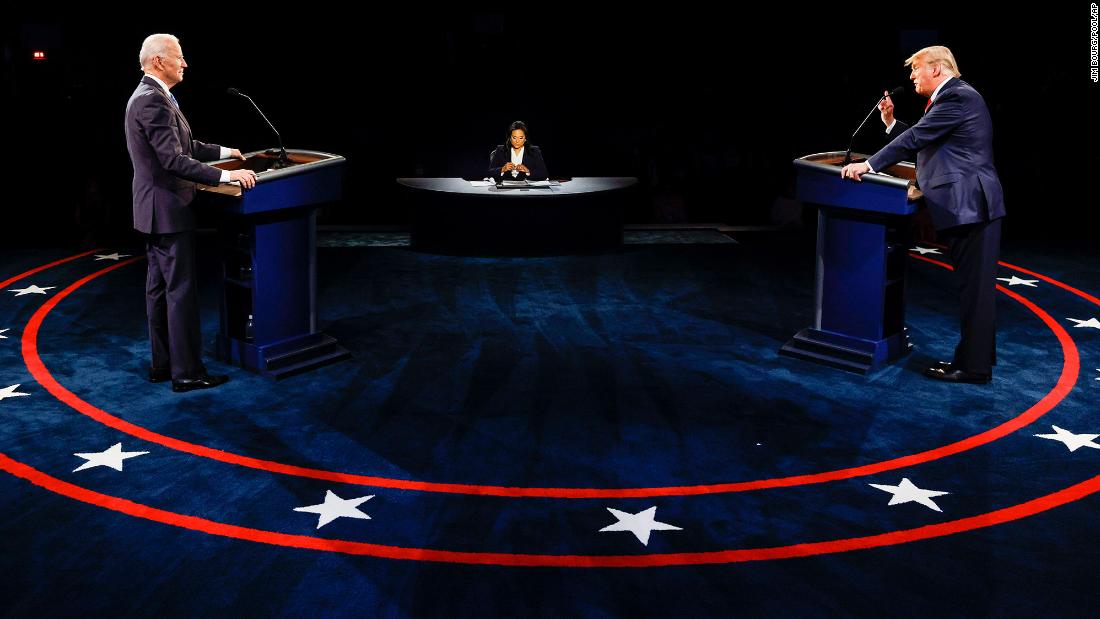 While much more subdued than his destructive performance in the first presidential debate, Trump’s remarks were still threaded with lies and occasional slashing personal attacks. At such a late stage of the presidential campaign, Trump entered the night looking for something that would help him catch up to Biden in key battleground states.

In stark contrast to the last debate, Thursday night’s event in Nashville was substantive and wide-ranging, giving American voters the chance to take the measure of both candidates without the distraction of Trump’s relentless interruptions from the first debate, which made it almost impossible to understand what either candidate was saying.

One of the most striking moments came when Trump was confronted with his administration’s policy of separating migrant families at the southern border. At a time when the two candidates are battling over Latino voters, Trump had no explanation for how long it would take to reunite children who are still separated from their parents.

Trump was unable to provide an answer over what happened to the more than 500 children who had been separated but said his administration was working “very hard” to reunite families while boasting of how the children have been treated. He tried to suggest that “the cages” where children were held were built under the Obama administration.

Former Vice President Joe Biden, in his most passionate answer of the evening, shot back that the separating of kids from their undocumented migrant parents was contrary to everything that America stood for.

“Their kids were ripped from their arms and separated. And now they cannot find over 500 sets of those parents and those kids are alone. Nowhere to go. Nowhere to go. It’s criminal,” Biden said.

“They are so well taken care of. They are in facilities that are so clean,” Trump responded, noting that reporters had toured the sites where children are being held.

Lawyers have not been able to reach the parents of 545 children who had been separated from their families by US border officials between 2017 and 2018, according to a court filing on October 20. Hundreds of parents may also have been deported without their children.

The filing from the Justice Department and the American Civil Liberties Union is part of an ongoing effort to identify and reunite families separated by the Trump administration, more than two years after the “zero tolerance” policy was created. While a federal court order forced the reunification of many of those families, an explosive government watchdog report released last year revealed there could be thousands more who hadn’t previously been acknowledged by officials.

Trump went on to claim that the policies of his administration have been a deterrent and that less than 1% of migrants who were expelled from the country return.

“They never come back,” Trump said. “Only the really — I hate to say this — but those with the lowest IQ, they might come back.”

After the exchange, in a section on race in America, Trump once again falsely claimed that he’s done more for Black people than any president since Abraham Lincoln and denied allegations that he was a racist. “I am the least racist person in this room,” he claimed.

Biden responded with mockery. “Abraham Lincoln here is one of the most racist presidents we have had in American history.”

The debate was far more substantive and controlled than the first presidential debate as Trump appeared to be working not to lose his temper and avoid the furious clashes at the start of their first debate. That event was so chaotic that the Commission on Presidential Debates took the unprecedented step of changing the rules before Thursday’s showdown: The candidate’s microphones will be cut off while their opponent responds to the first question in each of six segments. The topics for the discussion are “Fighting Covid-19,” “American Families,” “Race in America,” “Climate Change,” “National Security” and “Leadership.”

The debate began with moderator Kristen Welker asking how Trump and Biden will tackle the next phase of the coronavirus pandemic. Cases are surging across the United States with winter months approaching, a CNN analysis showed that 42 states have seen hospitalizations from Covid-19 increase by more than 5% over the past two weeks, a key indicator of how quickly the disease is spreading.

Trump made a firm defense of his handling of the pandemic and made the false claim that initial models had predicted that some 2 million Americans were expected to die. Painting a highly misleading picture of the pandemic as cases spike all across the country and hospitalizations begin to rise again, Trump claimed that the US is “rounding the turn.”

“We are rounding the corner. It’s going away,” the President said.

Trump spoke about his own experience fighting Covid-19 and downplayed the current spike, which medical experts have been warning about for months as the country heads into the fall and winter.

“There are some spikes and surges in other places. They will soon be gone,” Trump said.

The US Centers for Disease Control and Prevention projects there will be 235,000 to 247,000 coronavirus deaths in this country by November 14.

Biden parried with a fierce rebuke of Trump’s handling of the pandemic, noting that 1,000 people a day are dying. He focused on Trump’s past words — pointing toward his March statement that he takes “no responsibility” for the slow rate of coronavirus testing growth — and said his response is disqualifying.

“Anybody that is responsible for that many deaths should not remain as President of the United States of America,” Biden said.

The two men offered sharply different visions for the months ahead at a time when cases are rising in more than 30 states. Biden warned that the US is going to have a “dark winter” as the virus begins to rage out of control.

Trump rejected that view and offered upbeat and misleading statistics, including that 99% of people recover. “I don’t think we are going to have a dark winter,” the President said.

“We are opening up our country,” Trump said, adding that the US is “learning to live with it.” “We have no choice, we can’t lock ourselves up in a basement like Joe does.”

Biden rejected Trump’s attacks that he would lock down the country and harm the economy.

“I’m going to shut down the virus, not the country,” Biden said.

Trump stressed what he views as the dire consequences of too many coronavirus restrictions.

“We can’t keep this country closed. This is a massive country with a massive economy. People are losing their jobs,” he said. “They’re committing suicide. There’s depression, alcohol, drugs at a level that nobody’s ever seen before. There’s abuse, tremendous abuse. We have to open our country. You know, I’ve said it often — the cure cannot be worse than the problem itself. And that’s what’s happening. And he wants to close down — he’ll close down the country if one person in our massive bureaucracy says we should close it down.”

Joe Biden denied any wrongdoing by his son Hunter Biden in his overseas business dealings, pointing out that in Trump’s impeachment proceedings “no one has said anything (Hunter Biden) did was wrong in Ukraine.”

It was the most direct way in which the former vice president addressed his son’s overseas business ties, which Trump and his allies have sought to use to portray Biden as connected to shady foreign money.

“The guy who got in trouble in Ukraine was this guy,” Biden said, pointing to Trump, “trying to bribe the Ukrainian government to say something negative about me, which they would not do.”

Trump’s actions in Ukraine led the House to impeach him.

“I have not taken a penny from any foreign government,” Biden said.

The exchange came during the national security section of the debate, in which Trump claimed to have averted nuclear war with North Korea, even though what he has called his “love affair” with dictator Kim Jong Un has failed to secure any cuts in Pyongyang’s nuclear arsenal.

While tensions with North Korea that boiled early in Trump’s term have now cooled, the isolated state has more capable missiles and more nuclear arms than when Trump took office. And, according to Bob Woodward’s new book, “Rage,” former Defense Secretary James Mattis sometimes would sleep in his clothes because he thought war with North Korea could break out at any minute.

“They left us a mess,” Trump said, referring to Biden and former President Barack Obama. The former vice president said he would force China to rein in its fellow communist state, and said that unlike Trump, Obama refused to meet with Kim because the condition of such talks was denuclearization steps.

More than anything else, the exchange exemplified how no president for decades has managed to come up with an answer to one of the US’ thorniest foreign policy issues.

Trump looking for a game-changing moment

With 12 days to go before Election Day, Trump has been campaigning across the country with grievance-laden rallies, lashing out at his advisers and medical experts, blaming China for the spread of the coronavirus and refusing to take any blame for his poor handling of the pandemic, which has created a huge drag on his poll numbers.
Prominent Republicans have begun to openly distance themselves from the President as they worry about what Nebraska Sen. Ben Sasse called a potential “blue tsunami” where Democrats could maintain the US House while also taking control of the US Senate and the White House.
Biden currently has a larger lead in national polls than Hillary Clinton did at this point in 2016. In CNN’s Poll of Polls, Biden is leading Trump by 10 points nationally and he is also showing considerable strength in the key battleground states of Pennsylvania, Michigan and Wisconsin where Trump won by narrow margins in 2016.

Desperate to change the current trajectory of the contest, Trump’s advisers have been begging him to take a less combative approach on Thursday than in the first debate when he created a virtually unwatchable event by repeatedly interrupting Biden and threading his remarks with personal attacks on the former vice president and his son, Hunter.

Trump is struggling with female voters, who have increasingly gravitated to Biden. And he must also tighten his hold on one of his key constituencies, non-college educated White voters. Trump won those voters by 30 points in 2016, but he currently holds only a 19-point margin within that demographic, according to an analysis by CNN’s Harry Enten. Biden, who was born in Scranton, Pennsylvania, has proven to be a more formidable adversary than Clinton when it comes to those voters — one of the reasons why he is faring better in Midwestern states than the 2016 Democratic nominee.

He continues to underperform with seniors, another key constituency he must reach on Thursday, after failing to alter his behavior even after his own Covid-19 diagnosis. Trump is still underplaying the risks of the virus and holding huge rallies with few masks and no social distancing even as the US enters another deadly wave of the virus.