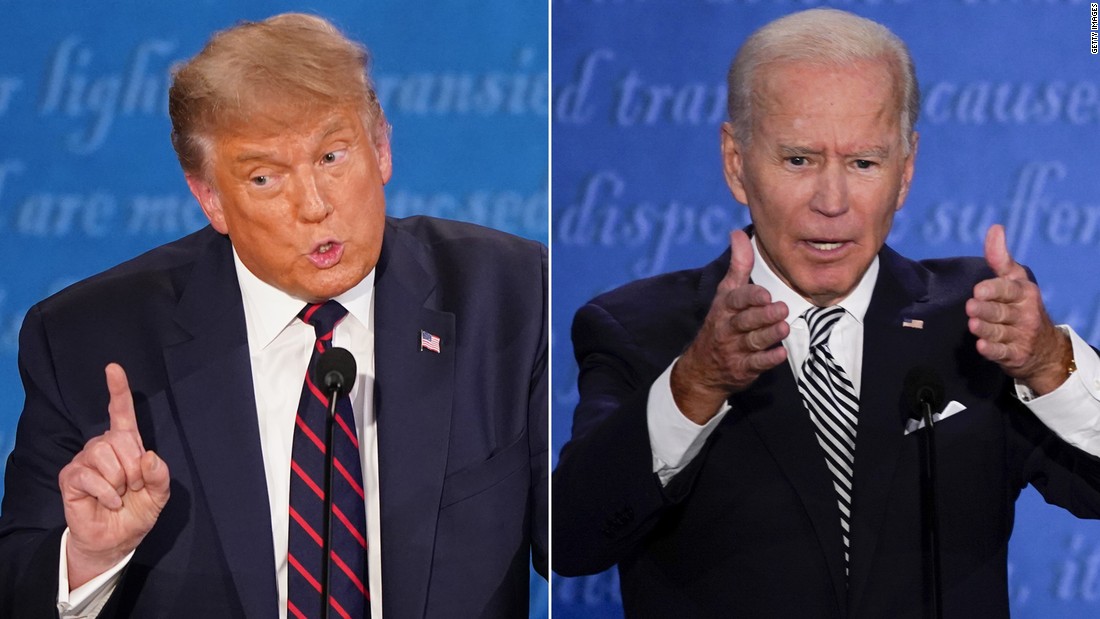 Trump attacked Biden and interrupted him during his answers on every subject. The technique led Biden to lose his train of thought on key points early in the debate, though he grew more and more used to Trump’s attacks as the night went on.

During a discussion about the explosive new reports from The New York Times that Trump paid little or no federal income taxes during much of the past two decades, Biden had tried to pivot into an argument about fairness, noting that the average schoolteacher paid more in taxes than Trump, but the President derailed him with his interruptions.

The dynamic emerged during the first sharp exchange over health care and continued through the debate.

“Donald, would you just be quiet for a minute,” Biden said. He repeatedly called out the President for attempting to bulldoze the debate, saying he wouldn’t even try to fact check Trump’s volley of untruths.

“Everything he is saying right here is a lie.”

Frustrated by the inability to carry a coherent thought, he broke into Trump’s retorts at one point, saying, “Will you shut up, man?”

When Biden was asked why voters should elect him over Trump, the former vice president said Trump has made the country “sicker, poorer, more divided and more violent.”

“When I was vice president, we inherited a recession. I was asked to fix it. I did. We left him a booming economy and he caused the recession,” Biden said. “With regard to being weaker — the fact is that I have gone head to head with (Russian President Vladimir Putin) and made it clear to him we’re not going to take any of his stuff.”

“He’s Putin’s puppy,” Biden said of Trump. “He refuses to say anything to Putin about the bounty on the heads of American soldiers –” as Trump began to interrupt him with an attack on his son, Hunter.

The debate was divided into six topics, but many Americans tuning in would have had a hard time finding any clarity about either man’s positions, as the debate devolved into shouting, rancor and cross talk that at times made it impossible to follow what either man was talking about.

Trump entered the debate looking to change the race as he trailed Biden, but instead played up to his most base instincts by going on the attack from the opening.

The President entered this first of three presidential debates in a far more vulnerable position than in his 2016 match-ups with Hillary Clinton, when he had no presidential record to defend and attempted to rattle the former secretary of state with frequent interruptions and by reeling off one-liners, including the quip in one debate that if he had been in the White House “you’d be in jail.” Many voters have already made up their minds about Trump, giving him poor marks for his handling of both the pandemic and the tension over race relations and police violence this year.

He returned to that 2016 playbook on Tuesday.

As expected, Trump repeatedly insulted Biden during the first 30 minutes of the debate, cutting him off at one point when he used the word smart.

“Don’t ever use the word smart with me,” Trump said. “There’s nothing smart about you, Joe.”

Trump’s performance was a microcosm of his entire life and career: Break all the rules and seek to dominate every room and personal interaction with bulldozing personality.

Biden, a far more conventional politician, appeared flustered at the start and struggled to make his own points with Trump interrupting. He eventually found a moment to counterattack, blasting Trump for trying to get rid of Obamacare.

“He doesn’t have a plan. The fact is this man doesn’t know what he’s talking about,” Biden said.

Trump’s strategies to take down the former vice president — including his unproven charges of corruption about Biden’s son Hunter, which he plans to raise on Tuesday — have so far been less effective than those he unfurled on Clinton. The President also may have miscalculated by setting a low bar for Biden Tuesday night as he repeatedly questioned the former vice president’s mental acuity and called him “dumb as a rock.”

Biden rips Trump for his handling of the coronavirus

When the conversation shifted to the pandemic, Biden excoriated the President’s handling of the coronavirus, noting that more than 200,000 people have died and some 40,000 people are still contracting Covid-19 each day.

“The President has no plan. He hasn’t laid out anything,” Biden said.

Trump disputed Biden’s comparisons with the number of cases in other countries and promised that a vaccine and life-saving treatments were right around the corner.

“It’s China’s fault. It never should have happened,” Trump said.

“We’ve done a great job,” Trump added, accusing the “fake news” of distorting his record on the virus.

Turning to Biden, he charged: “You would have lost far more people.”

Biden told Trump to get out of his bunker, and “get out of the sand trap and your golf course” to bring Democrats and Republicans together to do what needs to be done to save lives.

Trump tried to deflect the criticisms that he rarely wears a mask and has drawn thousands of people to his rallies with no social distancing, by claiming that Biden could never draw the crowds that he does. He also repeatedly accused Biden of wanting to keep the country shut down at the cost of businesses all over the country.

“This guy will close down the whole country and destroy this whole country,” Trump said as Biden laughed off the suggestion.

Trump on the defensive over taxes

During an exchange over the new revelations about Trump’s tax returns in The New York Times — which showed the President has paid no federal income taxes in 10 of the last 15 years — Biden noted that Trump paid less in taxes than most school teachers, but he fumbled a chance to drill the President on his tax liabilities and questionable business record, given that Trump evaded taxes largely by writing off his losses.

“You’re the worst president America has ever had,” Biden said.

Trump disputed the New York Times report by claiming that he has paid millions in taxes, but he also defended his approach of paying as little as possible in taxes as an aspect of his sharp business acumen.

Biden used The New York Times report to try to dismantle Trump’s claim to be a champion of the middle and working classes in Midwestern swing states. The former vice president argued that Trump’s actions in the White House have mainly benefited himself and his uber-rich allies.

In a preemptive strike to use the tax return issue to his advantage, the Biden campaign released the former vice president’s 2019 tax returns earlier Tuesday, which showed he paid nearly $300,000 in federal income tax last year.