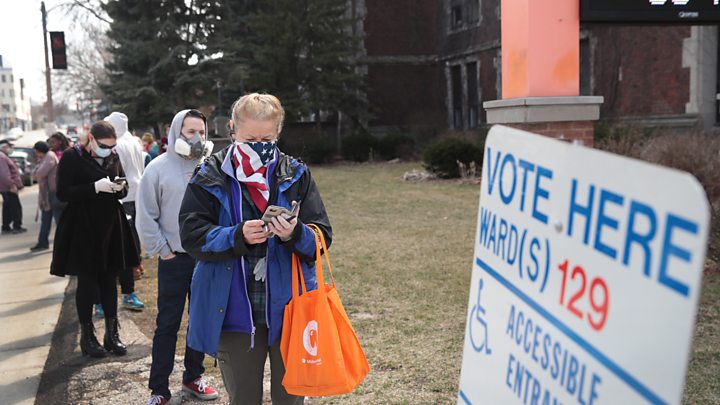 Coronavirus: Wisconsin defies its own lockdown to vote

The US state of Wisconsin pressed ahead with an election on Tuesday, despite a state-wide stay-at-home order amid the escalating coronavirus outbreak.

The governor had tried to postpone the primary to June, but was blocked on Monday by the state Supreme Court.

On the ballot were Joe Biden and Bernie Sanders, who are both vying to be the Democratic presidential nominee.

The eventual winner will challenge President Donald Trump, a Republican, in November.

Local offices were also on the ballot, and a seat on the state’s Supreme Court.

Wisconsin is the first state in three weeks to hold a primary with in-person voting since stay-at-home orders swept the nation amid the coronavirus pandemic. The Badger state imposed its own lockdown on 25 March.

All other states have postponed their primary season elections or moved entirely to postal votes while the country remains in the throes of its health emergency.

Wisconsin has recorded more than 2,500 coronavirus cases and 92 deaths.

The Democratic presidential campaign has been in deep freeze for three weeks.

It seems unlikely that Wisconsin will do anything to thaw the race.

Neither Bernie Sanders nor Joe Biden actively campaigned in the state, and the results – when they’re announced in a week – will be vastly overshadowed by the ongoing coronavirus pandemic.

The legal battle behind the decision to proceed with the election, however, could have very real implications for how US democracy functions during the outbreak.

Some Republicans, including President Donald Trump, have suggested lower-turnout elections benefit their candidates.

Many Wisconsinites may have been reluctant to cast in-person ballots.

Wisconsin’s dispute could foreshadow a contentious general election season where it will be impossible to keep political concerns and gamesmanship out of the decisions about the voting process.

“No Wisconsinite should ever have to choose between exercising their constitutional right to vote and being safe, secure, and healthy,” the governor said.

But the Republican-controlled legislature immediately took Mr Evers – a Democrat – to the state Supreme Court, where conservatives hold a 4-2 majority.

That same day, the US Supreme Court intervened, barring an extension of postal voting.

Pollsters expected a lower turnout on Tuesday to benefit the conservative judicial candidate – who was endorsed by the president – for the state’s highest court.

At a White House briefing on Tuesday, President Trump said the Wisconsin Supreme Court had made the right decision to allow the state’s primary election to go ahead.

When a reporter asked the president how he reconciled that view with his own request last month for an absentee ballot to vote by post in Florida’s Republican primary, he replied: “Because I’m allowed to.”

“If you can go out and get fast food, you can go vote curbside,” he told the New York Times. “It’s the same process.”

In the city of Milwaukee – Wisconsin’s most populous city – its usual 180 polling places were reduced to five. National Guard troops helped out.

Sally Rohrer, a graduate student at the University of Wisconsin, Madison, volunteered at a local polling station, a location that combined four sites into one.

Many voters who turned out on Tuesday donned masks and socially distanced as they lined up.

But Ms Rohrer told the BBC she and other volunteers were not supplied with masks.

She said that while many voters had covered their face not everyone had.

“This is a huge risk, not only to our health but to our democracy,” Ms Rohrer said.

Many of her fellow students said they did not receive requested absentee ballots, echoing reports from across the state of voters missing their postal ballots.

State data cited by the New York Times indicated that more than 9,000 postal votes were missing.

“They were just completely disenfranchised,” Ms Rohrer says. “Whatever the results from today’s election are, I won’t feel they were free and fair.”