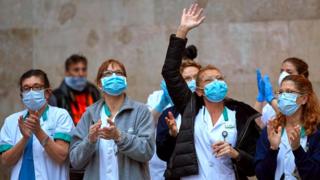 Spain is close to passing the worst of its coronavirus outbreak, the prime minister said, as parliament debated extending the national state of emergency.

“The fire starts to come under control,” PM Pedro Sánchez told MPs in Madrid, saying the country would have “total victory” over the virus.

Spain has Europe’s highest number of confirmed cases, with 152,446.

As of Thursday, the country has reported 15,238 deaths.

Mr Sánchez is the latest European leader to suggest the situation may be stabilising.

A number of European nations are now considering how to ease restrictions as early as next week, amid growing worries about the economic impact of lockdowns. The European Commission is aiming to co-ordinate a possible “roadmap” to move away from the measures.

Despite marathon talks from Tuesday into Wednesday, EU leaders are yet to agree to an economic support package.

On Thursday, German Chancellor Angela Merkel said her country rejected a plan to share out coronavirus-incurred debt in the form of “coronabonds” (or eurobonds) – mutualised debt that all EU nations help to pay off.

“You know that I don’t believe we should have common debt because of the situation of our political union and that’s why we reject this… but there are so many ways to show solidarity and I believe we will find a good solution,” she said.

Italian Prime Minister Giuseppe Conte earlier told the BBC: “If we do not seize the opportunity to put new life into the European project, the risk of failure is real.”

What’s the latest in Spain?

According to latest data from the past 24 hours, Spain has recorded 683 deaths – a drop from the 757 reported on Wednesday.

Total confirmed cases now stand at 152,446, and Spain has now reported the second-highest number worldwide after the US, which has more than 400,000.

Parliament is currently debating whether to extend Spain’s state of emergency until 26 April, keeping people at home for a further two weeks. It is widely expected the measure will pass.

Spain has imposed some of the strictest measures in Europe. But Mr Sánchez said they had helped drastically cut the infection rate.

Europe is still the region hardest-hit by the outbreak worldwide, suffering the majority of deaths and confirmed cases.

How will lockdown be relaxed after Easter?

Countries across the continent are however moving towards a gradual easing of lockdown measures, and leaders have begun to sound more positive in recent days.

Small, non-essential shops are set to open in Austria and Czech Republic next week. Denmark’s schools and kindergartens will reopen on 15 April, and Norway’s on 20 April.

In Germany, health minister Jens Spahn suggested on Thursday there could be “a gradual return to normality” after Easter if the current positive trend in numbers continues.

Switzerland’s daily death tolls have decreased for almost a week, while Belgium has for the first time recorded a drop in the number of people being treated in hospital for the virus.

Italy, which has the highest death toll worldwide, is also considering how to ease its restrictions. The infection rate there has slowed significantly from the peak of the outbreak, although Mr Conte warned the country still needed to be cautious.

“We need to pick sectors that can restart their activity. If scientists confirm it, we might begin to relax some measures already by the end of this month,” he said.

There are widespread concerns, however, about the Easter weekend, when people usually travel to see loved ones. Many countries have launched campaigns appealing for people to stay at home over the long weekend.

Austrian Chancellor Sebastian Kurz said nice weather was no excuse for gatherings, and said the situation remains “dangerous and deceptive, because the virus has not yet been defeated”.

Portugal has tightened lockdown measures for Easter, with a ban on people leaving their local area without official documentation.

Prime Minister António Costa has, however, suggested schools could reopen on 4 May.