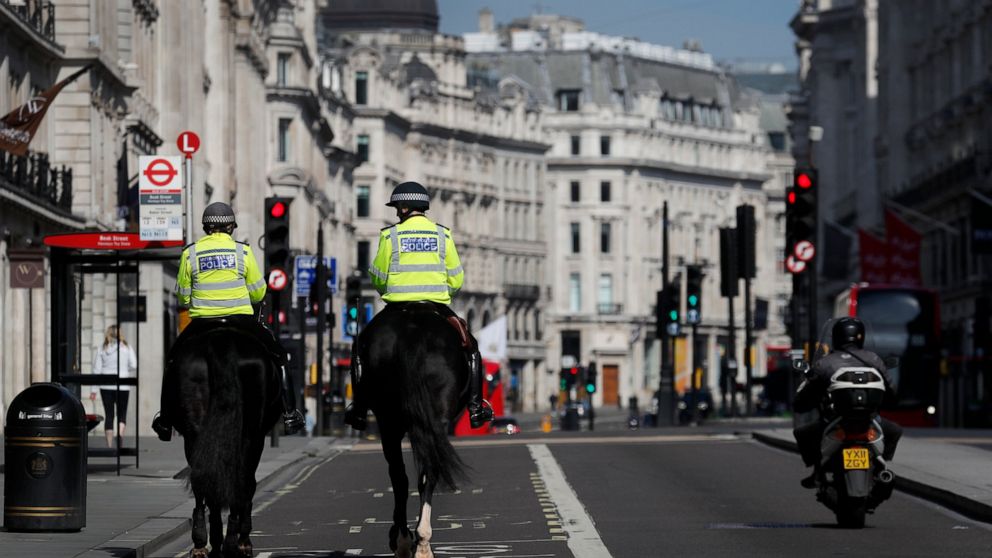 LONDON — The British government says a nationwide lockdown imposed to slow the spread of the new coronavirus will remain in place for at least three more weeks.

Foreign Secretary Dominic Raab says “any change to our social distancing measures now would risk a significant increase in the spread of the virus.”

The lockdown has been in place since March 23. Schools, pubs, restaurants and most shops are closed, and most people are allowed to leave home only for essential errands or exercise.

Medical officials say the outbreak in the U.K. is reaching its peak but it’s too early to loosen restrictions on daily life.

As of Thursday, 13,729 people have died in U.K. hospitals after testing positive for coronavirus.

LONDON (AP) — The U.K. government was poised Thursday to extend a nationwide lockdown for several more weeks, as health officials said Britain’s coronavirus outbreak — one of Europe’s worst — is nearing its peak.

Before the official announcement, British Health Secretary Matt Hancock said “it is too early to make a change” to the lockdown the government ordered on March 23 to slow the spread of the virus. Schools, pubs, restaurants and most shops are closed, and most people are allowed to leave home only for essential errands or exercise.

“I understand those who are calling for an end to the lockdown or some kind of exit strategy to start now, but I think it’s just too early for that,” Hancock said.

As of Thursday, 13,729 people have died in U.K. hospitals after testing positive for coronavirus, an increase of 861 from a day earlier. That number still understates the true toll of the pandemic since those figures do not include hundreds, and maybe thousands, of virus-related deaths in nursing homes and other settings.

Chief Medical Officer Chris Whitty said the U.K. is “probably reaching the peak overall” but that officials are “not yet at the point where we can say confidently and safely this is now past the peak.”

For now, extending the lockdown has wide public and political support. But as other European countries cautiously ease their restrictions, Britain’s Conservative government faces pressure to explain when and how the country will reopen.

The suspension of normal business activity has thrown hundreds of thousands of Britons out of work and sent the economy into a nosedive. The Office for National Statistics said Thursday that a quarter of U.K. businesses had temporarily closed since the lockdown began.

“We agree the measures need to remain in place, but to maintain morale and hope, people need a sense of what comes next,” said Keir Starmer, leader of the opposition Labour Party.

The Conservative government’s response to the pandemic has been complicated by the absence of Prime Minister Boris Johnson, who has not returned to work after spending a week in a London hospital being treated for COVID-19. Foreign Secretary Dominic Raab is filling in while Johnson recuperates, but the government is wary of making big decisions until he is back.

Epidemiologist Neil Ferguson, a government adviser, said “significant” social distancing will have to be maintained until there is a vaccine for the coronavirus — a development that could be over a year away.

He said easing restrictions would also require vastly expanded testing for the virus, so that people who are ill, and their contacts, can be isolated or quarantined.

Ferguson said without broad testing “we have relatively little leeway.”

“If we relax measures too much, then we’ll see a resurgence of transmission,” he told the BBC. “What we really need is the ability to put something in their place.”

Britain’s government has been criticized for its belated response to the pandemic, including limited testing and delays in getting protective equipment to health care workers.

The government insists it is rectifying those mistakes. It has vowed to conduct 100,000 tests a day by the end of April — a more than five-fold increase on current rates.

Critics have also accused U.K. officials of unnecessary secrecy over its pandemic planning. The government’s decisions are based on advice from the Scientific Advisory Group for Emergencies, a panel of scientists whose full membership list has not been made public.

The British government also is accused of neglecting nursing home employees and residents. Virus-related deaths at nursing homes or any other non-hospital setting are not included in the government’s daily tallies. The Office for National Statistics said up to April 3 this year, 383 deaths involving COVID-19 occurred outside hospitals.

In a leaked letter, nursing home bosses have accused the government of offering conflicting messages, creating confusion and adding to the workload of those on the front lines.

The letter from the Association of Directors of Adult Social Services, published by the BBC, said the distribution of protective equipment for nursing home staff had been “shambolic” and testing for health care workers was being expanded without “thought to who is going to be tested and what we are going to do with the result.”

Association President Julie Ogley said she regretted the leak of the letter but not its contents.

“Some of the language used in the letter may be more emotional than we would normally use, but we are in emotional times,” she said.