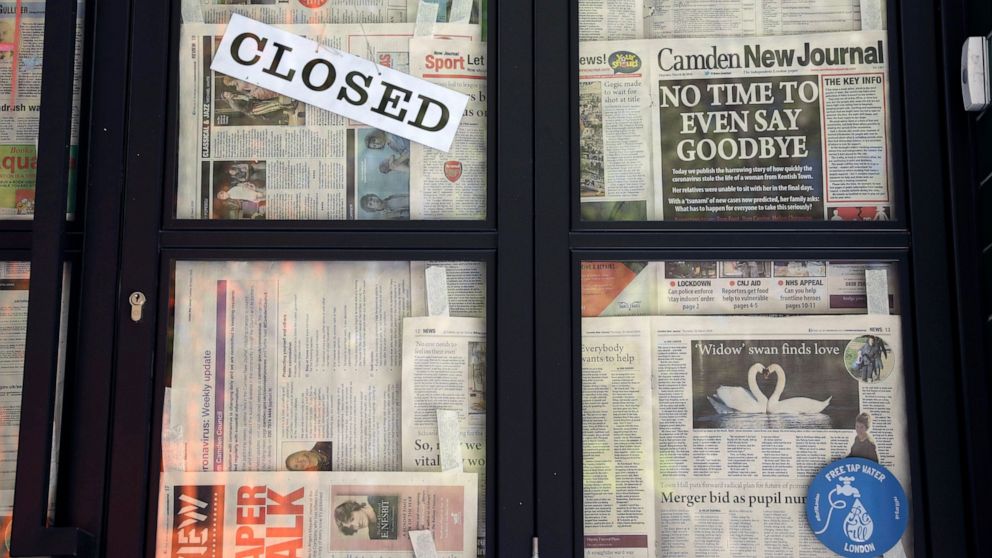 North American border-crossing limits are being extended to combat the spread of the virus, while some parts of Europe are seeing a gradual lifting of restrictions

RESTRICTIONS VARY: North American border-crossing limits are being extended to combat the spread of the virus, while some parts of Asia and Europe are seeing a gradual lifting of restrictions. All this while head of the World Health Organization warns that the worst is yet ahead.

— New Zealand will remain in a strict lockdown for another week before easing the rules a little to allow some parts of the economy to reopen. Starting next week, workers at some businesses such as construction and manufacturing will be able to resume their jobs.

— Denmark took another step toward reopening society when hair salons, dentists, physiotherapists, tattoo parlors and driving schools, among others, were allowed to reopen Monday.

— Some shops are reopening in much of Germany as Europe’s biggest economy takes its first step toward restarting public life after a four-week shutdown.

Shops with a surface area of up to 800 square meters (8,600 square feet) are being allowed to reopen Monday, along with auto showrooms, bike shops and bookshops of any size, under an agreement reached last week between the federal and state governments.

VENTILATOR DEMAND: Dutch health care equipment maker Philips is among the companies making ventilators, the breathing machines used to help patients hard hit by COVID-19. But surging demand for the machines was offset by slumping demand in other parts of its business.

Philips says orders at its unit that makes machines such as ventilators and patient monitors jumped 23% in the first quarter. However, the company’s net profit was hit hard as demand for other items, like personal health care products, slumped.

SOME MANUFACTURING BACK: Boeing and some other U.S. manufacturers are looking to restart some of their operations in the coming days amid pressure from President Donald Trump to reopen the U.S. economy. When they will be able to sell what they build is an open question.

— Sales of new automobiles in the U.S. could fall to levels not seen since the financial crisis in 2009, according to ALG, which tracks auto sales and resale values.

ALG’s worst-case scenario has total light vehicle sales falling to 11.3 million this year, a level not seen since automakers sold only 10.4 million new vehicles in 2009. The worst-case or “cautious” scenario from ALG is nearly 6 million vehicles below sales in 2019.

Even ALG’s optimistic outlook pegs sales at 13.1 million, with its “mixed” forecast at 12.6 million. U.S. auto sales tumbled almost 40% in March, even though many state stay-home orders didn’t take place until late in the month.

— Volvo Cars is restarting production at its suburban Goteborg plant in Sweden on Monday after talks with trade unions.

The Swedish car maker had in recent weeks reviewed every single working station in the Torslanda plant, near Goteborg, “from a health and safety perspective,” adding that when “social distancing is not possible, other protective measures have been put in place.”

Volvo Cars also plans to reopen a plant in Ghent, Belgium, on Monday but “at reduced production output.” Its South Carolina plant is anticipated to open May 11.

NO SURPRISE: Airlines have taken a big hit as travel ground to a halt with the outbreak of the pandemic. So eye-popping losses come as no surprise from an industry splitting $25 billion in government payroll aid.

— United Airlines recorded a $2.1 billion loss in pretax income during the first quarter as revenue tumbled in March during the pandemic. Excluding items such as write-downs connected to a loan and investment in Brazilian carrier Azul, the pretax loss was just over $1 billion. Revenue fell 17% to $8 billion, with daily revenue dropping $100 million a day in the second half of March. United cut its schedule 80% in April and 90% in May. It got $5 billion in cash and loans from the government and on Friday applied for up to $4.5 billion in additional federal loans — both under last month’s $2.2 trillion virus-relief measure.

— Four Danish and Swedish subsidiaries with low-cost carrier Norwegian Air Shuttle filed for bankruptcy Monday. The carrier said the move doesn’t affect the company in Norway, nor about 700 pilots and 1,300 cabin crew based France and Italy.

ODYSSEY OVER : While cruise liners have been plagued by a series of onboard viral outbreaks, some passengers considered themselves lucky to be on one during the crisis.

— Passengers from a luxury cruise ship that traveled the globe for 15 weeks while the new coronavirus spread on land started to disembark in northeastern Spain.

Monday’s port-of-call in Barcelona marks the beginning of the end of the around-the-globe cruise of the Costa Deliziosa, whose owner Costa Crociere, an Italian company, says there’s no COVID-19 cases on board. Hundreds of the boat’s 1,831 passengers were expected to get off the boat in Spain and the rest were expected to do so at the last stop, in Genoa, Italy.