An RAF plane carrying a delayed consignment of PPE from Turkey finally landed in the UK this morning – but is only carrying up to half the promised 84 tonnes of life-saving equipment.

The jet is one of three that have been waiting for days for the go-ahead to pick urgently needed medical clothing and equipment, including 400,000 gowns made by Turkish suppliers.

It is not known how much of the consignment has arrived today, but the RAF Atlas is believed to only have capacity for 40 tonnes. After the jet touched down, three pallets were seen being unloaded onto the tarmac.

The Government promised that the A400 would arrive back in Britain on Sunday, but it didn’t land in Istanbul until Monday, at 9.10pm local time. No clear reason has been given for the delay.

Fury over coronavirus PPE shortages is escalating amid claims the government was ignoring offers of help from businesses – and millions of pieces of PPE are still being shipped out of the UK in spite of the lack of equipment for NHS frontline staff.

And The Times reports how military personnel have slammed the NHS for its ‘appalling’ handling of distributing the PPE, with senior army sources saying some was being shipped to hospitals with good stocks that didn’t need it. 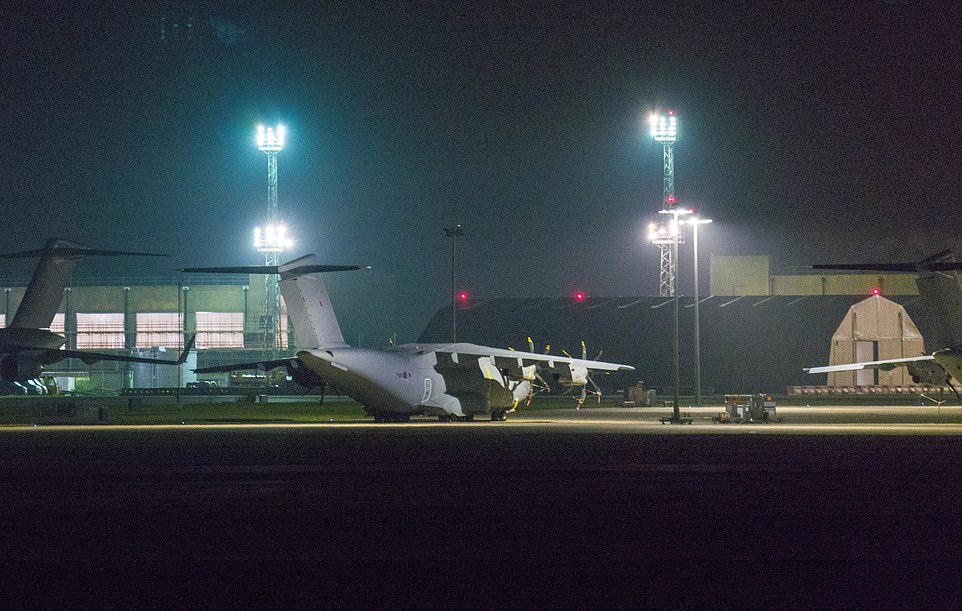 The RAF Cargo plane lands at RAF Brize Norton in Oxfordshire this morning at just after 3.30am 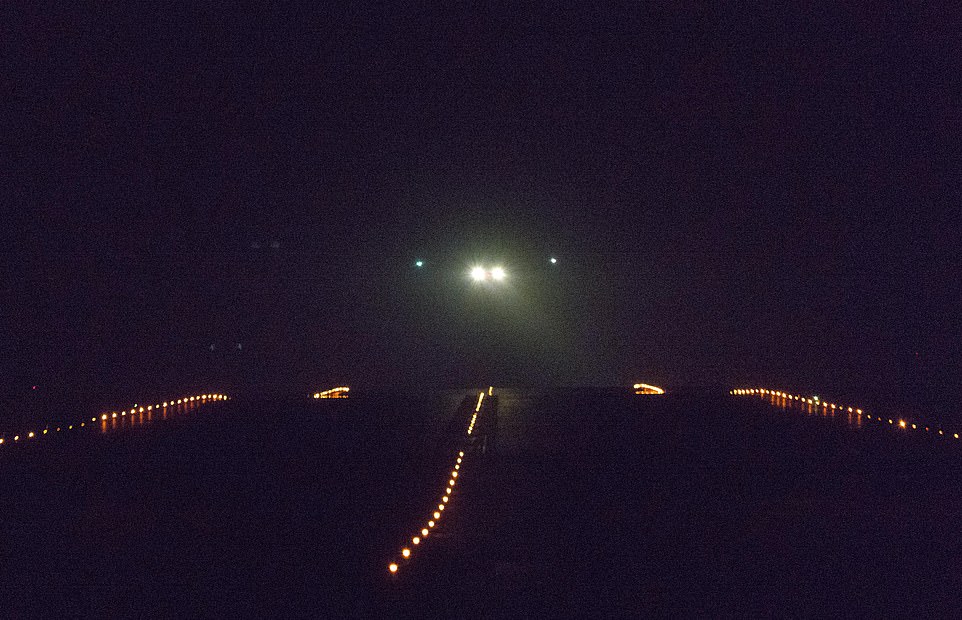 The Atlas A400 is spotted approaching the runway early this morning. It is only carrying up to half the promised 84 tonnes of life-saving equipment

The delay in getting the vital PPE equipment back from Turkey has been blamed on ”challenges at the Turkish end’ but Istanbul has retorted that Britain only requested help with the consignment on Sunday.

The government insisted they were pursuing ‘every possible option’ to secure additional kit but said that, with unprecedented worldwide demand, the situation is ‘very challenging’.

Local Government Minister Simon Clarke could not give a timescale on when the full supplies would arrive earlier this week, saying only that it would be in the ‘next few days’.

Separately, the Government said that 140,000 gowns had arrived from Burma – but with the NHS using 150,000 a day, the demand on resources remains intense.

In another day of chaos in the government’s attempt to get hold of vital PPE:

The Guardian reports that infectious disease specialists Landcent claim they could have delivered six million FFP2 masks for the NHS to use if they had placed an order three weeks ago.

They say they only got a response eight days later, by which time they had been sold to other countries.

Schuster’s MP, Bill Esterson, Labour MP for Sefton Central, confirmed that he also contacted Matt Hancock, to highlight the offer on 27 March but that he had never received a reply.

There are currently around 8,000 different firms offering personal protective equipment (PPE) supplies in the UK. Figures suggest ministers have engaged with around 1,000 of those, but is only working directly with 159 to deliver them to NHS workers.

Rachel Reeves, the shadow cabinet office minister, said on Tuesday she had been inundated by manufacturers who had contacted the government offering to make or supply PPE but that she had heard nothing back. 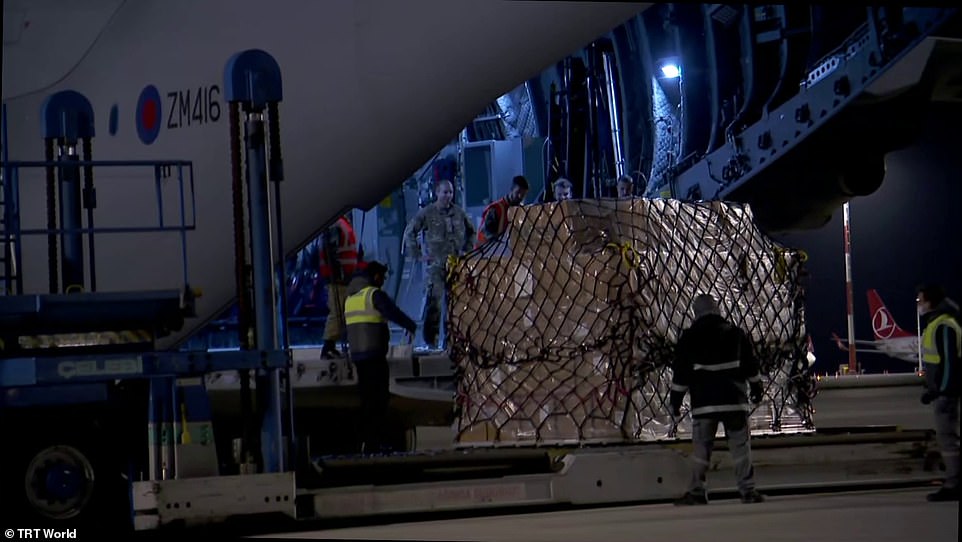 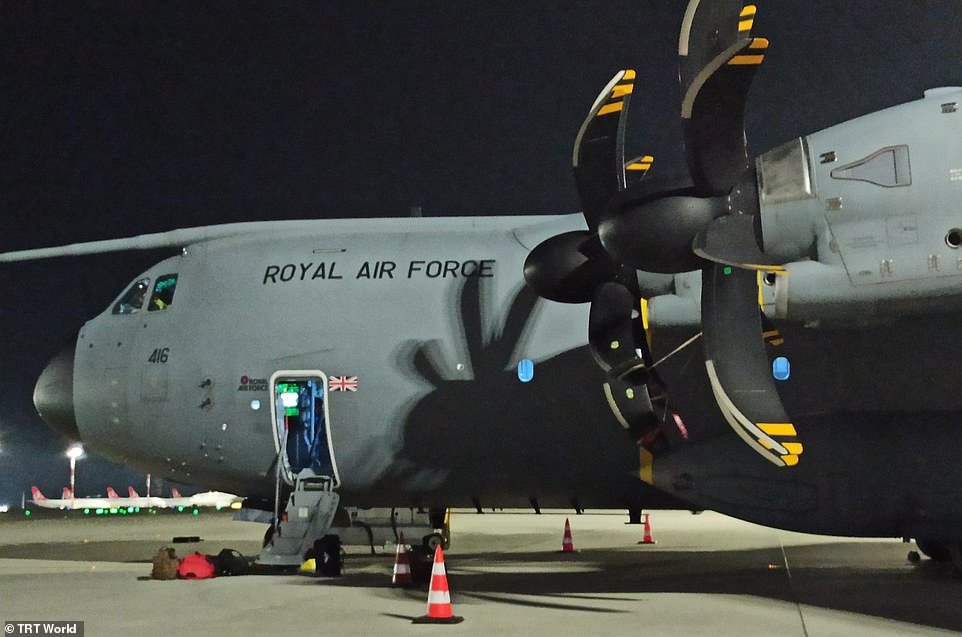 The Atlas A400 was meant to arrive back in the UK on Sunday, but has now taken off destined for the UK, which is suffering from a shortage of equipment to battle the pandemic

Downing Street rejected claims it ignored offers from firms, while local government minister Simon Clarke said there is a ‘standing presumption’ that the Government will do its utmost to buy PPE ‘wherever it can be sourced’ and urged manufacturers to ‘reach out’ to the Cabinet Office to log their ability to make equipment.

The Atlas A400 entered operational service with the RAF in 2014.

It has the capability to carry a 37 tonne payload.

It is capable of operating at altitudes up to 40,000ft.

It is operated by two pilots and a Weapons Systems Operator.

Senior sources in the army have blasted the health health service for its logisitics in getting PPE out to the right people, alleging that masks, aprons, gloves and other items were being assigned to hospitals that didn’t need them, leading to oversupply in some places.

The newspaper reports that it is understood that commanders are frustrated that the Covid Support Force has not been called in to lead on the allocation of PPE.

A Ministry of Defence spokesman told The Times: ‘The MoD understands just how challenging logistics can be, especially under current pressures.

‘Of course there may be frictions at a local level, but those same armed forces are doing everything possible to support their health colleagues. The MoD has full confidence in the NHS.’

With fears that staff in hospitals and care homes are risking their lives, the TUC called for an independent inquiry into the Government’s handling of the issue to be mounted before the end of the year. 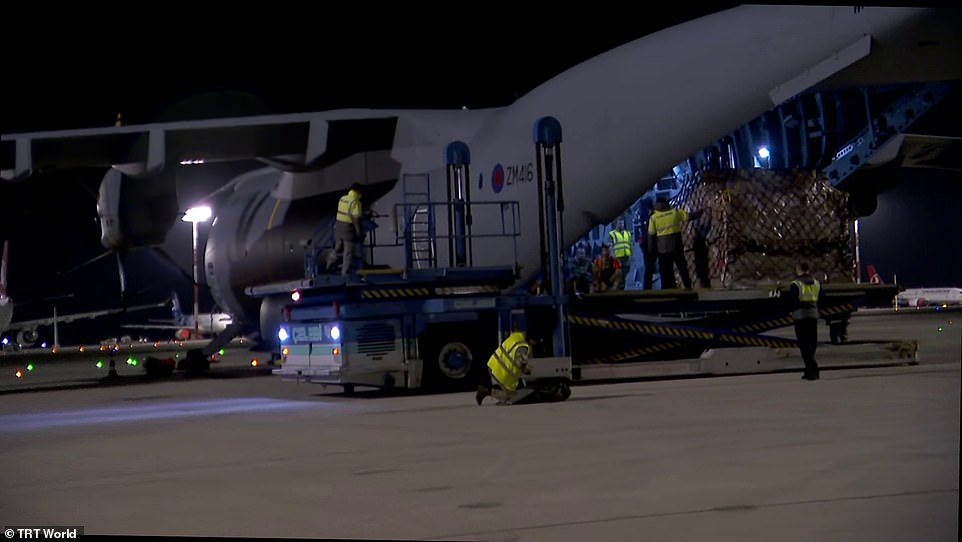 The Mirror reports how tens of thousands of visors are sitting waiting to be shipped abroad after the Government failed to agree to buy them.

The vital PPE kit has been made by Nottingham firm Printers Prime Group. It transformed its operation and took on 30 extra staff ready to make up to one million visors a month, which is 35,000 a day.

But the firm is frustrated that despite contacting officials a month ago, no orders have been placed. It has already delivered 350,000 to frontline NHS and care staff here for free or at cost.

Hospitals have sought other ways of obtaining PPE, with the Mid Yorkshire Hospitals NHS Trust buying 6,000 sets of coveralls due to a very low stock of gowns, although it admitted this was ‘not ideal’.

Chris Hopson, chief executive of NHS Providers, has said trusts are being forced into ‘hand-to-mouth’ workarounds, including washing single-use gowns and restricting stocks to key areas.

Chancellor Rishi Sunak told reporters at the Number 10 press briefing on Monday that work was ongoing to find more PPE.

The Atlas A400, pictured earlier this week remained empty at Istanbul airport. It was meant to arrive back in the UK on Sunday

The transport flight has been dogged by delays and confusion. Ministers then claimed it would arrive yesterday

The hold-ups come with hospitals warning they are close to running out of some items, and medical bodies saying doctors could need to make ‘difficult decisions’ between exposing themselves to the virus or ‘letting a patient die on their watch’.

Trusts have accused ministers of raising the hopes of health staff saying they had ‘bitter experience’ of promised PPE either failing to arrive, or turning out to be either faulty or the wrong kit.

Michelle van Vuuren, who runs a London-based property company, turned her business into a PPE distributor working with Chinese suppliers last month as the virus began to spread around the world.

She was subsequently passed to the Cabinet Office but her inquiries went ‘into a vacuum’ and were met with only an automated response.

The Deputy Chief Medical Officer faced an angry backlash after she claimed that people are not being ‘adult’ about PPE supplies.

Dr Jenny Harries slapped down critics of the government’s efforts to make sure frontline workers have access to the gowns, gloves and masks they need to protect against coronavirus.

She said there needed to be a ‘more adult, and more detailed conversation about PPE supplies’ as she insisted the UK was an ‘international exemplar in preparedness’.

But healthcare chiefssaid they had been ‘sounding the alarm’ on the apparent lack of PPE available in some settings ‘for months’. 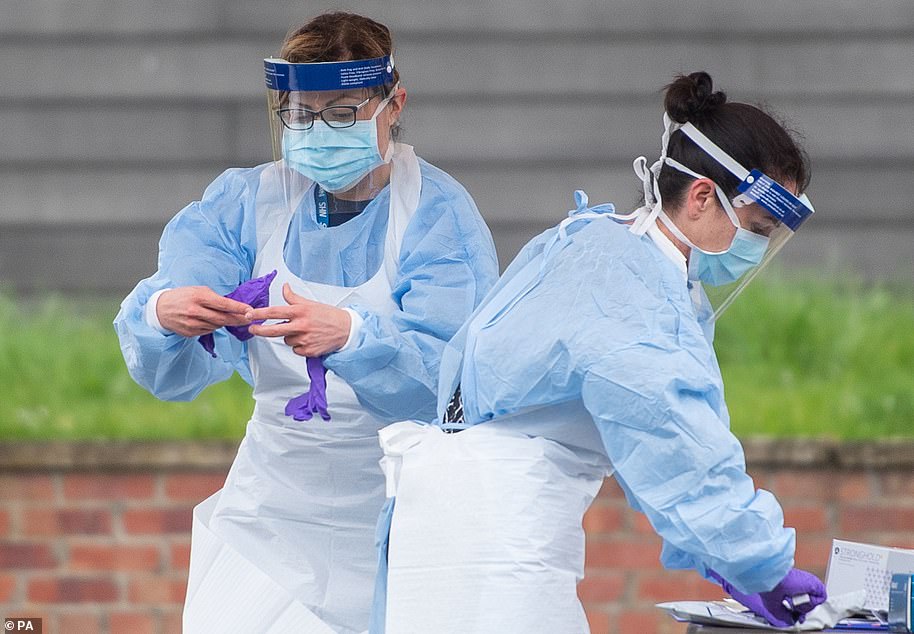 Amid growing frustration, the Government said it had deployed ‘every resource’ to get its hands on desperately needed PPE supplies and ventilators in recent months. NHS staff are pictured carrying out coronavirus tests in Lincoln

A British supplier of protective health equipment was forced to sell millions of life- saving items overseas after attempts to equip the NHS were met with an ‘impenetrable wall of bureaucracy’.

The company said UK procurement system was ‘unresponsive at best or incompetent at worst’ and delays were putting lives at risk.

The embarrassing revelations will raise questions about why the Government did not replenish PPE stockpiles and build up more supplies in March as the country entered the crisis.

Amid growing frustration, the Government said it had deployed ‘every resource’ to get its hands on desperately needed PPE supplies and ventilators in recent months.

But the supplier trying to sell millions of masks, gowns and aprons yesterday said it had spent ‘five weeks hammering at the Government’s door’ without response.

Michelle van Vuuren, who runs a London-based property company, turned her business into a PPE distributor working with Chinese suppliers last month as the virus began to spread around the world.

She was subsequently passed to the Cabinet Office but her inquiries went ‘into a vacuum’ and were met with only an automated response.

A senior civil servant has been forced into an embarrassing U-turn after claiming ministers took a ‘political decision’ to deliberately snub an EU scheme to buy PPE.

Yesterday Sir Simon McDonald told MPs it had been a ‘political decision’ by the Government not to take part in Brussels-orchestrated efforts to bulk-buy personal protective equipment (PPE) because ‘We left the European Union on January 31’.

But this evening he wrote to the chairman of the Foreign Affairs Committee to admit Boris Johnson’s ministers were not briefed on the EU scheme because of a ‘communication problem’.

Mr Johnson’s administration had previously claimed this version events – that missed emails had resulted in the UK not taking part. 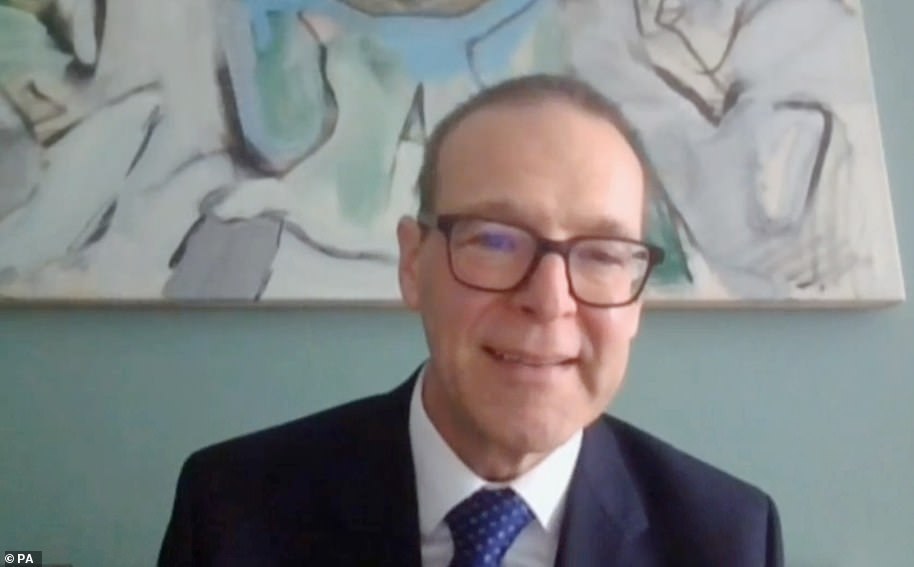 Sir Simon McDonald told MPs it had been a ‘political decision’ not to take part in Brussels-orchestrated efforts to bulk-buy protective equipment, but had to U-turn this evening

And humiliatingly, Health Secretary Matt Hancock confirmed there was ‘no political decision not to participate in the scheme’ during this evening’s Downing Street press conference.

In the letter, addressed to chair Tom Tugendhat, Sir Simon admits the ‘facts of the situation are as previously set out’.

He says: ‘Unfortunately due to a misunderstanding, I inadvertently and wrongly told the Committee that Ministers were briefed by UKMIS on the EU’s Joint Procurement Agreement scheme and took a political decision not to participate in it.

‘This is incorrect. Ministers were not briefed by our mission in Brussels about the scheme and a political decision was not taken on whether or not to participate.’

He went on: ‘Owing to an initial communication problem, the UK did not receive an invitation in time to join in four joint COVID EU procurement schemes.

‘As four initial schemes had already gone out to tender we were unable to take part.’