By Jack Wright For Mailonline

The EU is accused of watering down a report on China’s coronavirus disinformation campaign after Beijing pressured the bloc, according to media reports.

The New York Times and South China Morning Post say they have obtained the initial copies of a European report published on Friday which carefully documents how rogue states are pushing ‘fake news’ about the coronavirus pandemic.

It makes note of efforts by Xi Jingping’s regime to spread false information, especially by ‘deflecting’ blame for the outbreak of the pandemic.

The original report spoke of a Chinese bid to ‘improve its international image’, and included Beijing’s criticisms of France’s slow response to the virus.

It even noted how Beijing promoted false accusations that French politicians had used racial slurs against the head of the World Health Organisation.

The EU is now likely to face accusations of ‘appeasement’ at a time of heightened international tension as Western leaders criticise Beijing.

China is accused of concealing the origins of the pandemic. It is also accused of hiding the true number of coronavirus deaths inside its borders. 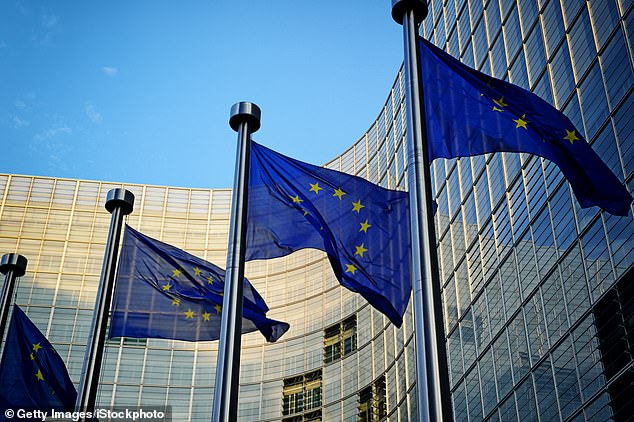 Pictured: European Union flags in front of the European Commission building in Brussels

According to The Times, the first report cited Beijing’s efforts to curtail mentions of the origins of the virus in China – including blaming the US for spreading the disease.

The first report said: ‘China has continued to run a global disinformation campaign to deflect blame for the outbreak of the pandemic and improve its international image. Both overt and covert tactics have been used.’

China was quick to move to block the publication of the report, which was on the verge of being released before revisions were ordered by EU officials.

In an email seen by TheTimes, Lutz Gullner, an EU diplomat, wrote: ‘The Chinese are already threatening with reactions if the report comes out’.

Both the South China Morning Post and The Times report how the sentence about Chinese ‘global disinformation’ and the dispute with France was removed.

The Post reported that EU officials feared a ‘strain’ in relations and increased ‘difficulty’ in getting medical supplies vital to the fight against Covid-19.

The Times reported claims that Esther Osorio – a communications adviser to EU Minister for Foreign Affairs Josep Borrell – ordered the delay of its publication.

Osorio supposedly asked analysts to revise the report to focus less on China and Russia, in an effort to avoid charges of bias, and instead differentiate between pushing ‘disinformation’ and a different narrative of events. 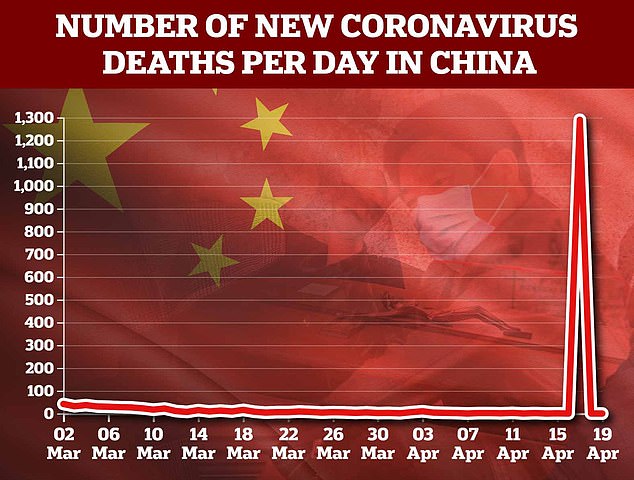 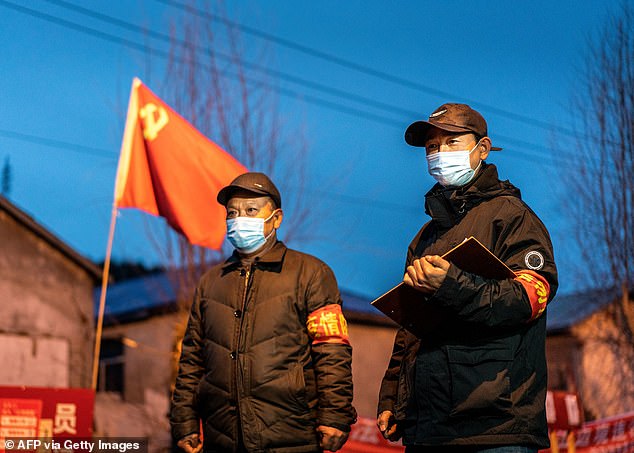 An EU report made note of efforts by China to spread false coronavirus information (pictured, staff at a checkpoint in Suifenhe, in China’s Heilongjiang province, April 21, 2020)

However, at least one analyst formally objected, writing to her bosses that the EU was ‘self-censoring to appease the Chinese Communist Party’.

In an email seen by The Times, Monika Richter complained: ‘Such appeasement will set a terrible precedent and encourage similar coercion in the future’.

An EU spokesman told The Times that neither revisions to the report had been ordered in response to pressure from China, nor had the document been delayed.

The European External Action Service (EEAS) – founded to monitor possible disinformation from rogue states like Russia – denied editing any part of the report in response to diplomatic or political pressure to The Times.

By Charlie Coe and Brittany Chain for Daily Mail Australia

China has accused Australia of ‘ideological bias’ and playing ‘political games’ after Prime Minister Scott Morrison called for an independent inquiry into the spread of coronavirus.

Foreign Minister Marise Payne raised the idea of a review into how the outbreak began last week, saying she agreed with the view the respiratory disease originated from a wet market in the Chinese city of Wuhan in 2019.

Mr Morrison has also spoken with leaders in the US, Germany and France with the aim of giving independent health inspectors powers to investigate areas where pandemics could spark in the future.

China hit back, describing Australia’s proposal as ‘political manoeuvring’ which undermined the world’s attempts to stem the virus’ spread.

An EU spokesman, told Fox News that The Times made ‘ungrounded, inaccurate allegations and contains factually incorrect conclusions’. He claimed: ‘The publications of the EEAS are categorically independent.

‘We have never bowed to any alleged external political pressure.’

The EEAS has previously been accused of softening its language in reports about alleged Russian disinformation in an effort to improve relations with Moscow.

These reports come at an inopportune time for the EU, which hopes to restore a lucrative trading relationship with China once the pandemic has subsided.

They raise questions about whether or not the EU will sacrifice its principles – including to transparency, democracy, and liberty – for economic fortune, as Europe-wide lockdowns which began in March take an increasingly dire toll on major economies, including Germany.

It puts the EU, whose detractors accuse it of ‘kowtowing’ to Beijing, in the middle of a fierce diplomatic row between China and the US, as President Trump alleges that Xi Jinping and Director-General of the WHO Tedros Adhanom Ghebreyesus are colluding to downplay the true figures of Covid-19 deaths in China.

President Trump last week said his administration was trying to figure out if the virus came from a Chinese lab. Beijing has aggressively pointed fingers back, by accusing the US of distracting the public from its own mistake.

The two countries have been at loggerheads since Mr Trump assumed the White House. In his second year as President, he declared a trade war with China.

A truce between the rivals saved the world economy then from crashing down.

However, an enflamed row between China and the US – the world’s two biggest powers – has the potential to spill out into geopolitics and security. 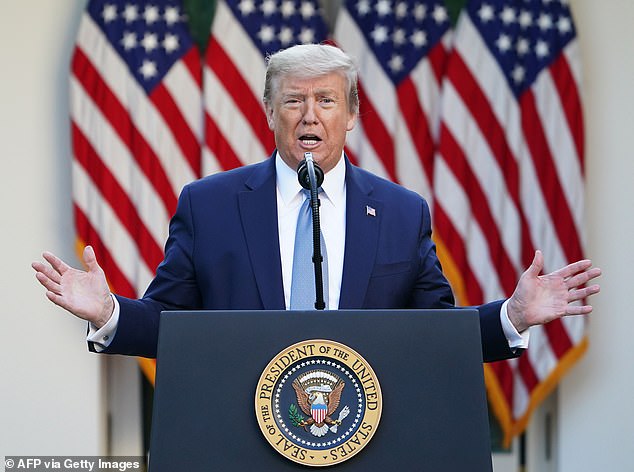 Donald Trump has accused the World Health Organisation of colluding with the Chinese regime in downplaying the true extent of Covid-19 deaths in China (pictured, April 15, 2020) 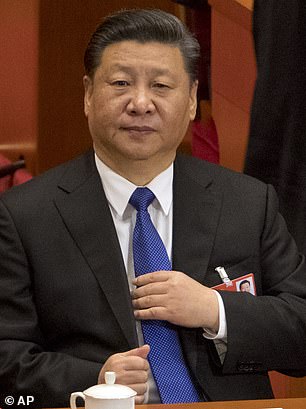 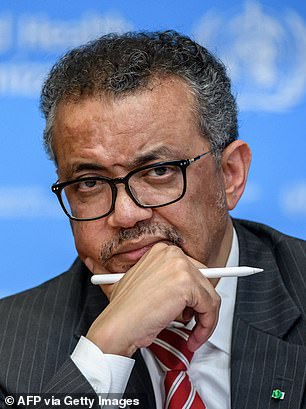 Mr Trump has claimed that the WHO (right, Director-General Tedros Adhanom Ghebreyesus) has gone soft on China because it is sympathetic to President Xi Jinping (left)

Already the coronavirus fallout is redrawing new contours on the world stage, as the UK Government clings tightly to the Trump administration.

Downing Street, for instance, has removed China from the list of other countries it uses to compare the spread of Covid-19. It is understood this stems from a widespread distrust of official Chinese coronavirus victim figures.

It comes days after the regime quarantined a city of 10million people in its northwest region near Russia. Yesterday, China’s northwestern province of Shaanxi reported seven new imported cases coronavirus, all in citizens returning home from Russia. 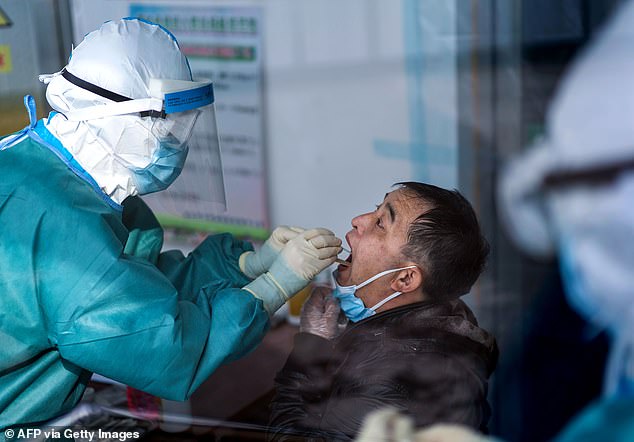 A second outbreak would be a setback for President Xi who is trying to restart the nation’s economy and present an image of power to the rest of the world.

Beijing claims that the total number of confirmed coronavirus cases in China, where the virus first emerged in late December, is now 82,816.

The death toll remained the same at 4,632, with no new deaths reported on April 24.

But there is widespread disbelief at those figures from Western leaders who are accusing the regime of letting coronavirus spread while its leaders ‘saved face’.

The Chinese Government has shut down gyms and swimming pools in Beijing as fears that the country is vulnerable to ‘second wave’ mount.

The people of Wuhan believe the death toll in their city that was the epicentre of the outbreak is 42,000 – not the 3,182 claimed by China.