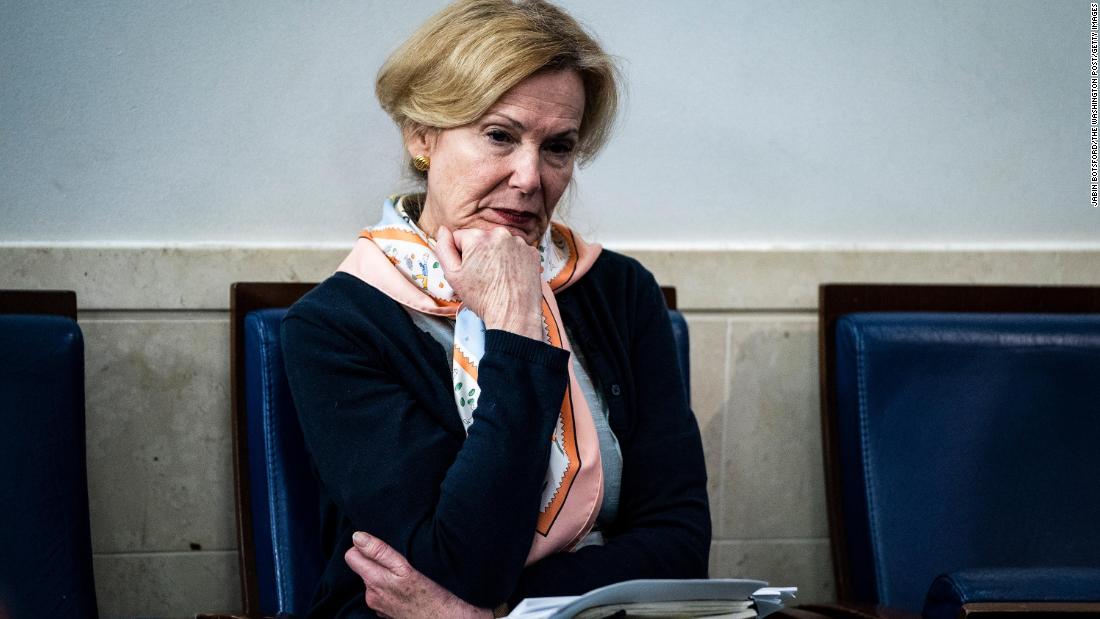 But Birx is facing what may become an even more difficult challenge to her credibility in the weeks ahead: the gap between the insufficient level of coronavirus testing — a lynchpin to opening the economy — and the federal government’s failure to put a viable testing infrastructure and guidelines in place.

But it was her inability to answer straight questions about the White House’s failure to provide a credible national testing infrastructure that may ultimately prove more long-lasting.

America’s long weeks of lockdown that helped depress the infection curve in some areas are beginning to wane as more and more states opt to ease stay-at-home orders, hoping to relieve economic conditions that raise the specter of Great Depression-style unemployment.

Some, including Georgia and Colorado, are pressing ahead more quickly even if they fall short of White House recommendations for a 14-day easing of infection rates that Birx was instrumental in writing.

As they experiment with re-opening, some states have done so little testing in comparison with the size of their population that they are essentially flying blind.

Birx’s tightrope walk raises questions about the extent to which top health officials in the Trump administration are risking their reputations as they seek to mollify a President who essentially dispensed junk science last week from the White House.

The dilemma of medical experts like Birx and Dr. Anthony Fauci has been drawn in sharper relief amid warnings from public health officials that the rudimentary testing apparatus in many states is an invitation to disaster as they open up.

The understandable desire of many governors to relieve crushing economic conditions carries a potentially deadly price of a spike in infections.

Millions of tests a day

On CNN’s “State of the Union,” Birx said it is important to diagnose coronavirus before “it is evident in communities” even though there are not even enough tests for people who are already sick.

She spoke about a widening presence of the Centers for Disease Control and Prevention in the states, cooperation among governors and said labs are now learning how to work on different testing platforms — but did not define exactly what she meant. When pressed by CNN’s Jake Tapper, she did not provide a clear answer on whether states were up to speed on testing levels suggested by the administration’s guidelines before opening should be considered.

Some experts think millions of Americans may need to be tested each day. Despite repeated White House claims of imminent improvements in testing, the US has only tested just more than 5 million people in total so far.

Birx implied in an interview with NBC’s “Meet the Press” that number is nowhere near sufficient.

“We have to realize that we have to have a breakthrough innovation in testing,” she said. “We have to be able to detect antigen, rather than constantly trying to detect the actual live virus, or the viral particles itself,” Birx added. Antigen tests, which look for characteristic structures from a virus, are often used for rapid flu tests.

Fauci said Saturday that the US should “probably” double current testing in the next several weeks. But after the President said Thursday he didn’t agree with the infectious diseases specialist that the US was not doing enough testing, Fauci said: “We don’t want to get fixated on how many tests you need.”

Jeffrey Shaman, an environmental health sciences professor at the Columbia University Mailman School of Public Health, said it is hard to say what level of testing “will be sufficient in our society, particularly as the virus is so widespread.”

“A doubling of testing is a start but may be insufficient,” he said in an email to CNN when asked about Fauci’s estimate. “Regardless these efforts need to be supported by effective contact tracing, which requires a bevy of trained personnel.”

Shaman added that testing needs will change as the economy re-opens: “Should chefs and waiters at restaurants be tested every day? Every week? What about dentists and bus drivers? Ideally, we would have abundantly available testing and protocols for testing many professions routinely,” he said.

There is no sign that the federal government has plans in place to address such complexity. Indeed, Trump has said that testing should largely be up to the states despite pleas from multiple governors for more help.

Birx, a world renowned public health expert who helped lead the fight against HIV/AIDS, has earned praise for her steady leadership. CNN reported that she was influential behind the scenes last week in getting Trump to break with Georgia’s Republican Gov. Brian Kemp over his aggressive opening plan. But the flap over disinfectant poses the question of why she is defending Trump.

“I made it clear, and he understood, that it was not as a treatment. And I think that kind of dialogue will happen,” Birx told Tapper.

“I think it bothers me that this is still in the news cycle, because I think we’re missing the bigger pieces of what we need to be doing, as an American people, to continue to protect one another.”

Yet it is the President who has made that goal more elusive by peddling unproven therapies for Covid-19 and claiming that the federal government is doing more testing than even the governors want — despite pleas for more help with testing.

Governors around the country have offered varying goals for the level of coronavirus testing needed before they feel comfortable reopening. Embracing a conservative approach, California Gov. Gavin Newsom said he hoped the state could test 25,000 people a day by the end of April. (This past week, the state was testing about 16,000 people a day.)

“Our goal is north of 60,000 tests a day and that’s a phase one goal,” Newsom, a Democrat, said Wednesday of his state, which has a population of 40 million people.

Newsom also said California, where the stay-at-home order is in effect until May 15 and could be extended, will need an “army” of people to trace coronavirus cases.

By contrast, Colorado Gov. Jared Polis, a Democrat, made the decision to allow his stay-at-home order to expire Sunday, even though cases in the state are still rising and Colorado has not met the White House guidelines of a 14-day reduction in cases.

As of 4 p.m. Sunday, the Colorado Health Department said it had tested 63,274 people in a state of about 5.7 million people. There were 13,441 reported coronavirus cases at the time of the update.

Some Colorado businesses will be allowed to reopen when the state’s stay-at-home order expires Sunday, and Polis will allow offices to resume activity on May 4 at half capacity as long as they maintain social distancing and proper spacing.

“We always wish, Jake, that I had next week’s information and next month’s information available to me today,” Polis told Tapper Sunday on “State of the Union.” “That’s not the world we live in.”

During a press conference on Wednesday, Polis said testing was just one component to guide the state’s decision-making process. “It’s not a panacea,” he said. “We can’t just test and trace our way out of this.”

But Denver Mayor Michael Hancock, a Democrat, announced this week that his city would extend its stay-at-home order until midnight on May 9. In terms of testing, he told Tapper this week that he wanted to get “at least to a level that we felt confident we can give people assurances that they can go back to work safely.”

In Georgia, where Kemp decided to open some businesses this past week, including nail salons, tattoo parlors and barber shops, critics have said there is nowhere near enough testing to do so safely.

On “State of the Union,” former Georgia House Democratic Leader Stacey Abrams noted that her state has the 14th highest infection rate and the seventh slowest testing rate.

“We cannot open an economy when the people who will power that economy are at risk — and until Georgia can trace and track and treat, then we cannot reopen the economy,” Abrams said Sunday on “State of the Union.”

That, in a nutshell, is America’s wider dilemma and the one that will define the way that Birx, her colleagues in the administration and ultimately Trump will be viewed by history. A lack of testing hampered the administration’s efforts to slow the pandemic from the start. Similar failings now threaten the country’s hopes of getting back to normal life.