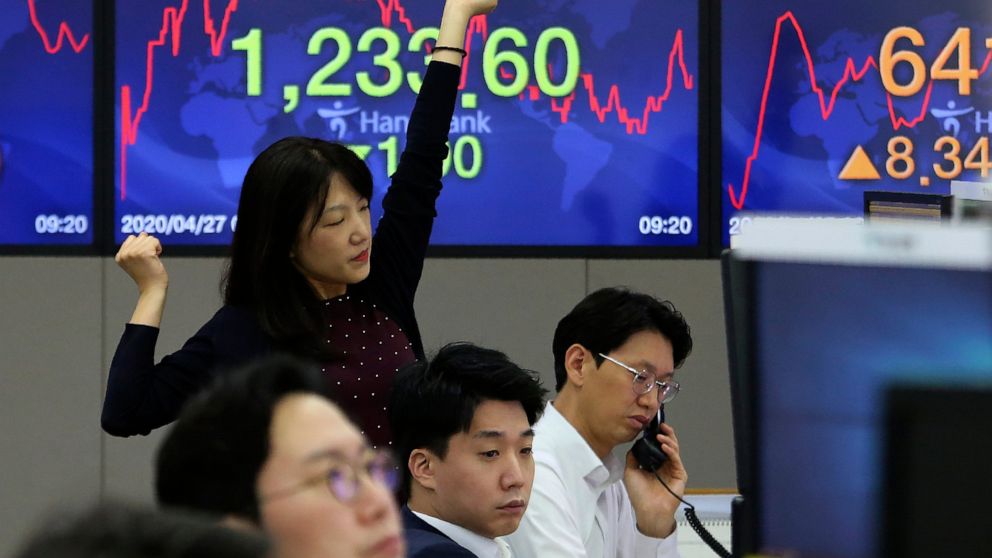 TOKYO — Asian shares are mixed Tuesday as governments inch toward letting businesses reopen and central banks step in to provide cash to economies.

Worries remain about fresh surges of coronavirus cases in places like China and South Korea, where they had declined as a result of social distancing, testing and arduous efforts by medical workers.

Japan’s government is warning against travel during the upcoming Golden Week holidays, which start this weekend and extend into the first week of May, the biggest holiday for the nation after the New Year’s holidays.

There is no lockdown in Japan but the government has declared a state of emergency, requesting that people stay home. That lasts through Golden Week, but it may be extended.

From Rome, Georgia, to Rome, Italy, companies are watching as politicians detail plans to ease up on restrictions that were meant to slow the coronavirus pandemic but also erased businesses and jobs. Retail chains, cruise lines and other businesses whose profits hinge on people stepping outside their homes jumped to some of Monday’s biggest gains. The S&P 500 climbed 1.5%.

This week is chockablock with potentially market-moving events, including meetings for several of the world’s largest central banks. Nearly a third of the companies in the S&P 500 are also scheduled to report how profitable they were in the first three months of 2020 and, more importantly, perhaps talk about how they see future conditions shaking out.

With central banks and governments promising overwhelming amounts of aid for markets, some investors are focusing on the potential return of growth as the outbreak levels off in some areas.

“We’re in recession, it’s a long recovery from here,” said Joe Seydl, capital markets economist at J.P. Morgan Private Bank. But the distance between those two points “is starting to look a little bit better than a few weeks ago because it looks like we’re past the worst of it.”

Monday’s gains were widespread and accelerated though the day. At the head of the pack were some of the stocks hardest and earliest hit by the coronavirus pandemic.

Banks and other financial companies rose 3.6% for the biggest gain among the 11 sectors that make up the S&P 500. They had tumbled earlier on worries about waves of households and businesses defaulting on their loans.

In the U.S., the reopening of some businesses in Georgia and other states, along with a slowdown in hospitalizations in the hardest-hit state of New York, helped revive financial stocks. So did a rise in Treasury yields, which mean bigger profits for making loans. The sector is still down 26.9% for the year.

Retail chains and real-estate investment trusts that own shopping malls also recovered some earlier losses as investors looked toward a future where people visit stores again. Even travel-related stocks, which fell before the rest of the market on worries about the coronavirus outbreak, were strong.

In the U.S., roughly 150 companies in the S&P 500 are scheduled to report earnings this week. That includes the Big Five of Amazon, Apple, Facebook, Microsoft and Google’s parent, Alphabet, which together make up about a fifth of the index.

The yield on the 10-year Treasury rose to 0.65% from 0.59% late Friday. It’s still well below the 1.90% level it was near at the start of the year, though. Yields tend to drop when investors are downgrading their expectations for the economy and inflation.

Prices have been swinging wildly as demand for energy collapses and storage tanks come close to topping out.

“There’s a huge oversupply we’ve been left with due to the incredibly sharp drop in consumption,” said Richard Swann, editorial director for Americas oil markets at S&P Global Platts.