‘We are continuing to rapidly expand our capacity and I’m confident that we have enough testing to begin reopening and the reopening process,’ Trump said at Monday’s press briefing. ‘The testing is not going to be a problem at all, in fact it’s going to be one of the great assets we have.’

Bloomberg and Fox News Channel reported details about the plan prior to the president’s Rose Garden appearance including that the federal government would aim to provide states enough tests to screen at least 2 per cent of their residents, ramping up testing in May through June. 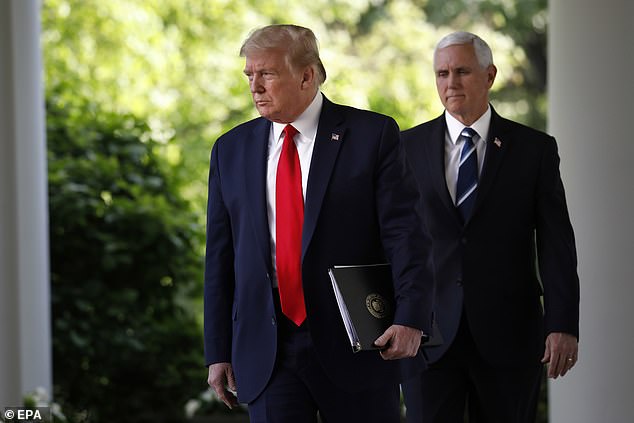 President Trump said that testing ‘is not going to be a problem at all’ as he said the U.S. had enough coronavirus testing capacity to start reopening businesses 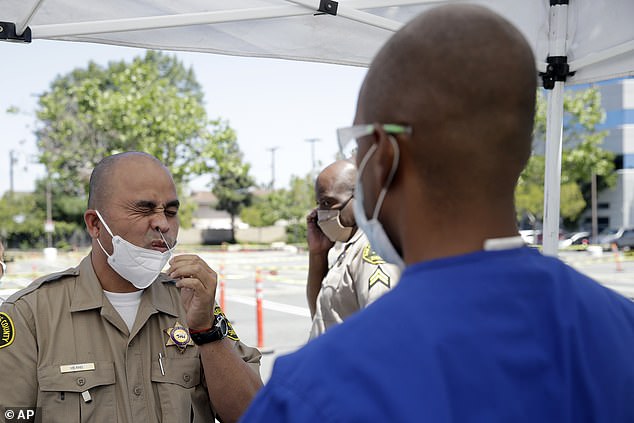 A Los Angeles sheriff takes a COVID-19 test on Monday using a swab. The president has pledged to get states more swabs for coronavirus testing

If governors wanted to have the capability to test higher than 2 per cent of a state’s population the White House will work with them, Fox News Channel said.

The tests from the federal government would target elderly and minority populations, who see higher death rates from the virus, Bloomberg said.

So far more than 5 million COVID-19 tests have been administered in the United States.

The government’s aim is to be able to have anyone showing symptoms, as well as first responders and medical personnel tested. Surveillance testing will be used to watch for pockets of the disease in at-risk communities, such as the elderly living in nursing homes.

On Monday, the White House, the Centers for Disease Control and Prevention and the Food and Drug Administration jointly released two documents – a testing overview and a testing blueprint – that defined what the federal and state responsibilities for coronavirus testing would be.

‘Our blueprint describes how states should unlock their full capacity,’ the president explained.

The overview showed that testing was already at step eight of an eight-part plan.

The final step, according to the White House, was coordinating with govenors ‘to support testing plans and rapid response programs.’

In the three-phase ‘Opening Up America Again‘ guidelines that were released  earlier this month, in order for states to move on to each phase, ‘robust testing’ needed to be in place, while cases trended downward.

The administration outlined its role in the document provided to the public Monday.

The federal government would provide expedited regulatory approvals for tests and testing equipment.

Governors have asked the federal government to allow for slightly different swabs and chemical agents to be used in the tests in order to make up for supply chain issues. That message was received, White House coronavirus taskforce members indicated.

The federal government would also work with the private sector to develop ‘innovative diagnostic tests.’

The federal government said it would only act as a supplier of tests as a ‘last resort,’ the document read.

Trump has long wanted testing to be a purview of the governors and not on hs plate.

He held a call with the governors on Monday to unveil the plan.

One participant told CNN that the governors were told the taskforce was currently looking into the needs of each state in regards to testing and ‘will get back with specific commitments and timelines over the next couple of days.’

At the Monday press conference, Trump said he helped the governors last week by simply pointing out to them the labs in their states.

‘Very few understood that we have tremendous capacity,’ Trump said of the governors, a claim he made last week as well. ‘Then one week ago we provided each goveronor with a list of names, addresses and phone numbers of the labs they could find additional test capacity in their state.’

The president said this move made testing ‘absolutely skyrocket’ in recent days, with 200,000 COVID-19 tests concluded just on Saturday. ‘That will be doubling very soon,’ the president said.

‘Our blueprint describes how states should unlock their full capacity,’ Trump said. ‘So we’re deploying the full power and strength of the federal government to help states, cities, to help local government to get this horrible plague over with and over with fast,’ the president added.