Now deliver us from supermarket chaos: With the most needy families STILL unable to get online deliveries we call for action to ease the crisis

By Ben Wilkinson and Fiona Parker For The Daily Mail

Money Mail today calls on the nation’s supermarkets to do more to ensure the elderly and vulnerable can have food delivered to their homes.

We have now heard from hundreds of anxious readers who say they have been told to stay at home but cannot get an online supermarket delivery slot.

Around 300 of your letters and emails have been pulled together into a damning dossier which we will send to all major supermarkets and a parliamentary inquiry into food supply during the pandemic. 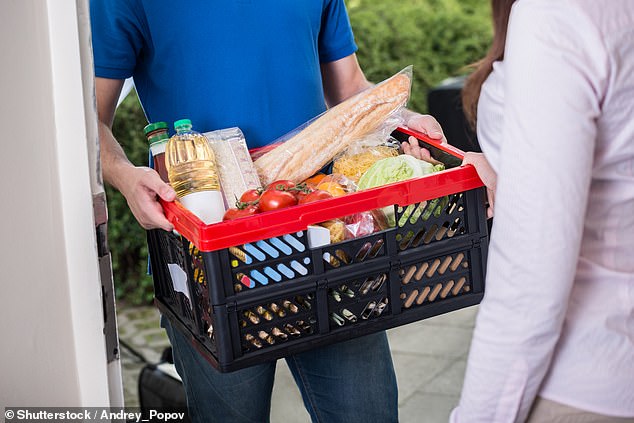 Vital: We have now heard from hundreds of anxious readers who say they have been told to stay at home but cannot get an online supermarket delivery slot

Money Mail has also today produced a ‘shopping list’ of demands we believe will help society’s most needy secure deliveries.

Supermarkets have so far hired extra staff and are making hundreds of thousands of extra deliveries in the lockdown.

However, last week Money Mail revealed how severely ill patients and their families had been unable to have their food delivered to their homes — despite receiving letters from the NHS informing them to ‘shield’ themselves for 12 weeks.

Many were staying up into the early hours of the morning to try to secure a slot. Hundreds of elderly and vulnerable readers have flooded our inbox with similar tales.

A survey by charity Independent Age poll has this week found that 52 per cent of over-65s have struggled to get the food they needed.

Close to 40 per cent were unable to access supermarket delivery services.

The NHS has sent letters to 1.85 million people considered extremely vulnerable to Covid-19. These letters provide instructions on how to access extra support — including supermarket deliveries — if needed.

The Government is also sharing its database of the most vulnerable people with the supermarkets. But a Money Mail investigation has found many of these are still unable to have food delivered.

Former pensions minister Baroness (Ros) Altmann says: ‘It is important that supermarkets ensure even the small delivery orders are prioritised.’

Caroline Abrahams, charity director at Age UK, says: ‘We would urge supermarkets to extend priority slots to a wider group to ensure more people are able to get the support they need.’

The Environment, Food and Rural Affairs select committee of MPs has launched an inquiry into food supply in the pandemic.

Chairman Neil Parish says: ‘It is vital that those who have been told to self-isolate can get the food they need.’

Cancer victim dies before she could book

Ann Punch was unable to get a supermarket delivery before she died of breast cancer, aged 67, this month.

The retired teacher did not receive the NHS letter that would have made her a priority and allowed her and husband John, 70, to have food delivered to them in Stonnall, Staffordshire. 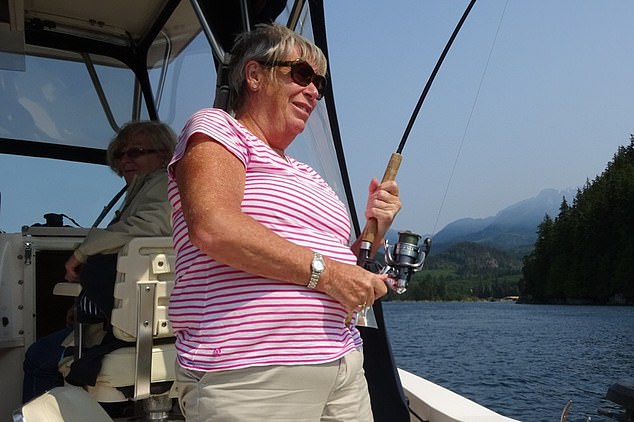 Retired teacher Ann Punch was unable to get a supermarket delivery before she died of breast cancer, aged 67, this month

John, a chartered surveyor, tried to register Ann as vulnerable with the Government — but had no response before she died on April 5.

The couple’s daughter, a senior police officer, has now had to drop off essentials for him.

John says: ‘The fact the system doesn’t work is so frustrating.

‘Ann was clearly vulnerable and there should have been a simple way of getting her registered and signing up for priority deliveries.’

Don McKay, 73, who is having palliative chemotherapy for incurable pancreatic cancer, has had the letter from the NHS but couldn’t book a delivery with Tesco.

He and wife Christie, 70, are relying on their children to deliver supplies. Their eldest daughter regularly stays up past midnight to try to place an online order. Don says: ‘It’s so frustrating.’

Cancer sufferer Beryl Payne, 73, was told to shield herself after finishing a course of chemotherapy last month. The widow registered for support on April 3 after struggling to get a delivery.

Yet her Ocado account says that she is not on its priority list. She says: ‘I was even second-guessing myself and wondering if I really was vulnerable when the supermarkets didn’t see me that way.’ 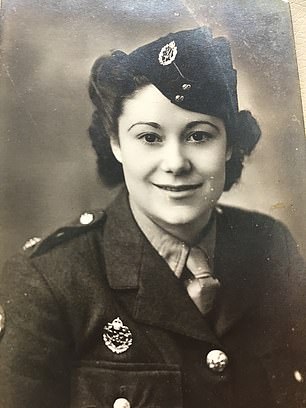 Denied: Deaf and blind Win Bouldin, 98, was  a lance corporal in the Auxiliary Territorial Service during World War II

Deaf and blind Win Bouldin, 98, was not considered vulnerable enough to qualify for priority supermarket deliveries.

Win, a lance corporal in the Auxiliary Territorial Service during World War II, lives with her daughter Pauline 74, and her partner Paul, 74, in Croydon, South London.

Pauline says: ‘I really don’t want to bring the virus back to my mother. I have looked after her for so long and I couldn’t bear it if anything was to happen to her.’

Patricia Wilby is also having to send parcels of groceries to her blind son Mark McClenaghan 500 miles away because he was not considered vulnerable enough.

Mark, 48, from Glasgow, was able to travel to supermarkets before the coronavirus outbreak — but his lack of sight means he cannot practice social distancing.

Patricia, 67, says: ‘People don’t seem to understand that blind people can’t go on as normal during these circumstances.’

Meanwhile, John Mapp’s 82-year-old wife Irene has repeatedly stayed up until midnight to secure a delivery slot from Tesco to their home in Queniborough, Leicestershire. John, 81, has chronic kidney failure but hasn’t had a letter classing him as vulnerable.

Irene says: ‘I was a bit disgusted when I was told there was nothing they could do because we didn’t have a letter, it seemed harsh.’

‘I feel like I just take booze to 30-year-olds’

A Sainsbury’s delivery driver has told Money Mail he is fed up with delivering crates full of alcohol to the fit and healthy when the vulnerable and elderly struggle to make orders.

The man, who asked not to be named, says far too many adults under 50 were using online deliveries when they could go to a store.

Sales of alcohol at supermarkets jumped by 31 per cent in March.

He says: ‘My colleagues and I feel we are an ‘alcohol delivery service’ for thirtysomethings. Supermarkets are not going to limit delivery sizes voluntarily as they are in business to make money.’

He says supermarkets should limit the amount of alcohol customers can have delivered to avoid vans being overloaded.

The driver, who is in the south of England, says around 30 per cent of his deliveries went to those in need.

He adds: ‘People who are elderly and vulnerable cannot get slots. There is something going wrong.

‘It seems very selfish and thoughtless that if they are forced to go out to shop and catch this virus their lives could be on the line. If we are really all in this together, habits need to change.

‘I am very disheartened by the selfishness of a minority, who prevent those really in need obtaining the deliveries they need.’

No slots for care home either

But he has been unable to book any slots to the home, Hankham Lodge in Westham, East Sussex, since the lockdown began.

Instead, his staff are visiting an Asda during the carers’ hour. Peter says: ‘I’ve been contacting all the major supermarkets but all anyone has is nice words and no actions.’

Former mayor Colin Rigby, 78, and his wife Jean are relying on weekly food boxes from their local council because they cannot get a supermarket delivery slot.

Colin, once mayor of the Blackburn with Darwen borough council, was advised by the NHS to stay at home because he has had a heart bypass and suffers from chronic obstructive pulmonary disease.

But despite being eligible for a priority supermarket delivery slot, the local councillors, who live in Edgworth, Lancashire, have been unable to find any availability.

Jean, 76, says: ‘I’m lucky the council provides food boxes but I feel bad as you don’t pay for them.’ 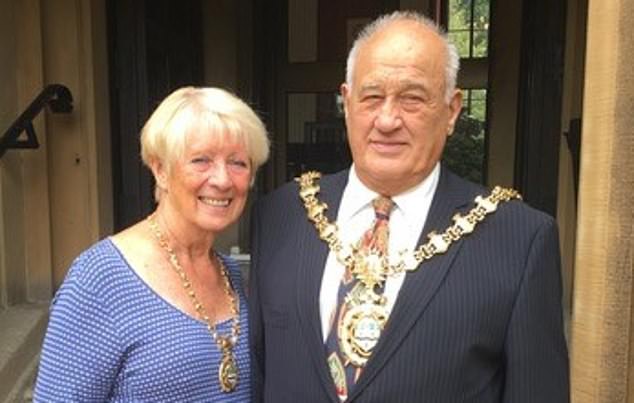 Former mayor Colin Rigby, 78, and his wife Jean are relying on weekly food boxes from their local council because they cannot get a supermarket delivery slot

Andrew OpiE, from supermarket trade body the British Retail Consortium, says: ‘There is not enough capacity to deliver to every vulnerable consumer. Community solutions are needed, with people shopping on behalf of vulnerable friends and neighbours.’

The supermarket has now put Win’s daughter Pauline, Don McKay, and John Mapp on its list for priority deliveries.

A spokesman says: ‘Ensuring we support our most vulnerable customers is our priority.’

Peter’s care home has also been given priority online deliveries for items he can’t get wholesale. Wait-rose says it will speak to Beryl and Colin to see how it could help.

I haven’t been able to get a delivery slot since lockdown started. I emailed Waitrose to say I am 72 and have a bad foot and back. But Waitrose has told me I am not a vulnerable person.

My 80-year-old husband has Alzheimer’s. Thanks to Money Mail, I called Tesco and tried the website. I was able to access a priority slot.

My husband and I are in our 70s and we are struggling to get a delivery from Asda.

While we have not received letters from the Government informing us we are vulnerable, we still rely on deliveries due to our age.

A house on our street has received three supermarket deliveries in the past week. They go running each morning, so one could assume they are in good health.

Meanwhile, I have been unable to get a slot for my husband, who has a weak immune system and cannot leave our home.

I am a leg amputee and I use elbow crutches to get around — which means I am unable to carry a basket or push a shopping trolley.

But I’ve been told I do not qualify for a shopping priority delivery slot.

I am on the Government’s ‘at risk’ list, but every time I try to book a delivery from Asda there are none available. In my street I see supermarkets delivering to those who are young and fit enough to go shopping.

I’m self-isolating with my husband, as I am 76 and he is 80. We have no relatives in our town. Last month I got a delivery from Morrisons but not one since.

I gave up trying to get online deliveries from the big supermarkets weeks ago. I phoned my local Co-op with my order; it was delivered within two days, by a local van.

I live on an island in the Inner Hebrides. I used to get a Tesco delivery from Oban, mainland Scotland. Now I struggle to get any shopping.

Sainsbury’s has more than 725,000 slots for the elderly and vulnerable. It has also introduced volunteer shopping cards so others can shop on behalf of the most vulnerable.

Waitrose says it is delivering more than 100,000 orders a week and has committed to ensuring at least 25 per cent go to vulnerable customers.

A government spokesman says: ‘We understand how challenging this period is for everyone, especially the clinically vulnerable.

‘We are also looking at ways to prioritise those who are at increased risk but are not on the clinically extremely vulnerable list.’