By Alex Brummer for the Daily Mail

When the coronavirus became an issue early this year there was much loose talk about it being no more than a cold.

But with deaths at more than 27,000 in the UK (including care homes), and worldwide infections at above 3m, this is a human tragedy beyond imagination.

Similarly, it was easy to regard the economic impact as transitory. The snapshot of Britain from the latest batch of financial updates, however, looks devastating. 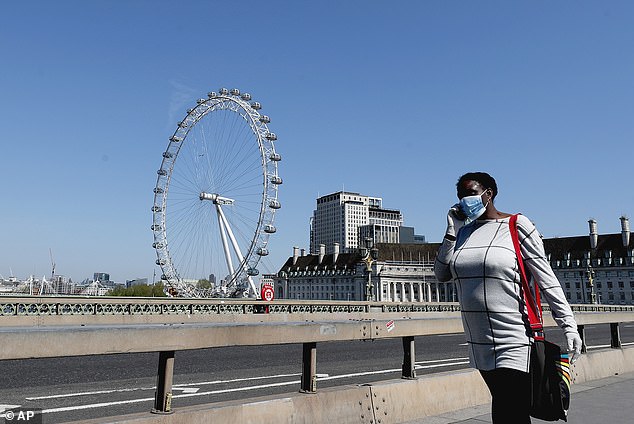 Covid impact: The snapshot of Britain from the latest batch of financial updates, however, looks devastating

Barclays boss Jes Staley has demonstrated that his battle to keep investment banking as a key part of operations is working, with income up 44 per cent.

The rest of the message is deeply disturbing, with provisions for bad debts ramped up to £2.1billion. Staley is not mincing his words, arguing that the fallout is worse than the financial crisis.

Coming from a banker in the frontline at JP Morgan in New York in 2008-09, that is quite a declaration.

In parallel, the picture from the US, Britain’s biggest single trading partner, is calamitous. After a decade of growth, GDP tumbled 4.8 per cent in the first quarter and the forecast is for a 40 per cent loss of output in the current period.

The massive fiscal stimulus of £2.4trillion is all that stands between the US and a catastrophe which would dwarf the Great Depression.

In Britain, aerospace and airlines are among the most troubled industries. After a 49 per cent slump in first-quarter profits, Airbus described the meltdown as the ‘gravest crisis’ the industry has known.

These words came hard on the heels of BA’s decision to slash 12,000 of its 42,000 workforce in spite of sitting on a cash cushion of £6billion. BA’s action reflects a trend. Scandinavian carrier SAS is dismissing 5,000 from its much smaller workforce.

Bringing retail back also is going to be an enormous challenge. Next’s full-price clothing sales fell 52 per cent in the last three months and it warns the impact of the pandemic will be felt far longer than anticipated, with a sales drop of 30 per cent over the full year.

This, from the group regarded as the pin-up of the fashion sector because of the way it harnessed online sales.

Not so long ago, retail analysts would discuss with great reverence whether an extra day of Easter shopping would make a difference to the numbers.

Now the debate is about if and when the lockdown is lifted, social distancing and whether sales and earnings can ever be brought back.

When coronavirus hit there was much talk of a ‘V’-shaped rebound for output. The issue now is how deep, long and disruptive the slump is going to prove.

It is a frightening moment.

Amid the wreckage we can be thankful for big pharma.

Both Astrazeneca and Glaxosmithkline are putting their shoulders to the wheel in the fight against Covid-19, jointly expanding testing capacity and separately working on palliative treatments and, in Glaxo’s case, ramping up the science and production capacity for vaccine manufacture.

Away from the immediate crisis, Astra boss Pascal Soriot is making an amazing fist of meeting the sales and targets some people thought were impossible at the time of the rejected Pfizer bid in 2014.

In the first quarter, sales climbed 17 per cent to £5billion. The Cambridge-based health giant has come through the Covid-19 dark tunnel in China and out the other side

Astra’s blockbuster lung cancer treatment tagrisso is sweeping all before it.

There are promising compounds for prostate cancer and there is a pipeline filled with opportunity. It is now in a tussle with oil giant Shell to be the UK’s most highly valued stock.

Glaxo is boosted by its vaccine for shingles, coronavirus stock-building and demand for pain relief medicines. It recorded a 19 per cent in overall sales boost.

The UK’s science-based economy is sparking.

If Sharon White finds retail at John Lewis hard, she is not showing it.

In her new role, management at Waitrose has been bolstered by hiring Sainsbury’s refugee James Bailey, food deliveries have been ramped up ahead of the Ocado divorce and John Lewis is doing well online. Reopening stores will be a different ball game.

But White is infectiously optimistic.