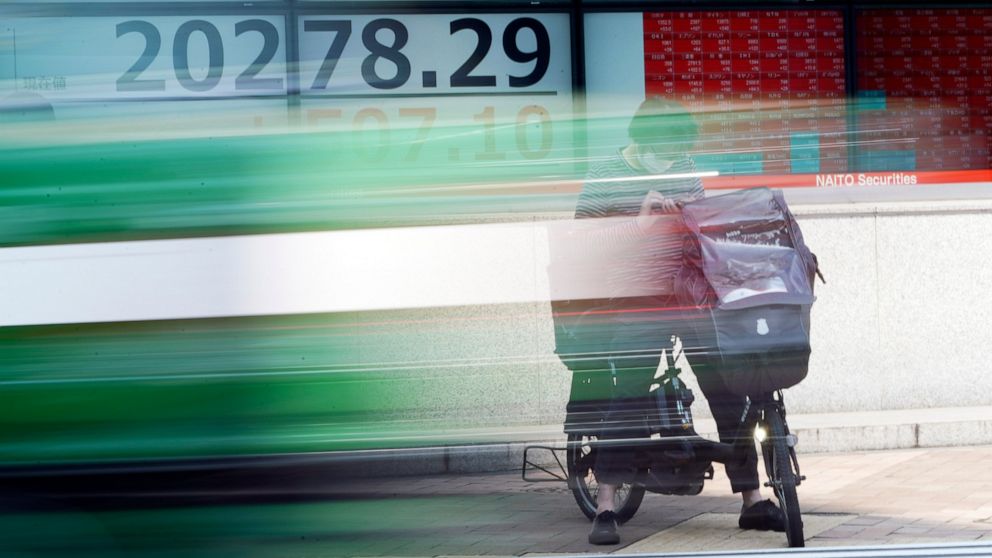 NEW YORK — A crush of dismal data about the economy helped send markets lower Thursday, a meek ending to a historic, juggernaut month for stocks.

The S&P 500 fell 0.9% after reports showed millions more U.S. workers filed for unemployment benefits last week and the European economy crumpled to its worst performance on record last quarter, among other lowlights. It was the biggest loss for the U.S. stock market in more than a week, but it was still just a wiggle within the S&P 500’s best month in decades.

The index surged 12.7% in April, its biggest monthly gain since 1987. Before Thursday’s fall, it had been on track for its best month since 1974 as stocks recouped more than half their 34% plunge from February into late March on worries about a sudden, devastating recession.

“The disconnect between the market and the economy in April is about as wide as any of us have ever seen,” said Ryan Detrick, senior market strategist for LPL Financial.

Promises from the Federal Reserve to do whatever it takes to prop up the economy through the coronavirus crisis helped spark the rally, as did trillions in spending by Congress. The rally has continued recently on optimism that economies around the world are close to reopening. All but 27 stocks in the S&P 500 climbed during April.

The month’s gains for stocks came in the face of mayhem in the oil market, where prices in one corner dipped below zero for the first time, and as investors continued to rush into U.S. government bonds in search of safety. Reports piled up by the day showing the severe hits the economy is taking from widespread stay-at-home orders meant to slow the spread of the virus.

It all left many professional investors skeptical about the steep rebound in stocks, whose rapid ascent resembles a “V” on a line chart following its equally sharp decline, when there’s still too much uncertainty about how long the recession will last.

“The rebound in April was an assumption that this was going to be a short, V-shaped recovery, both economically and at the corporate and business level,” said David Lyon, global investment specialist at J.P. Morgan Private Bank. “In our view, it probably has gotten a little ahead of itself. We think it’s going to be a longer and slower recovery.”

He said it could take a couple years before the economy and people’s behaviors get back to what they were like before the outbreak.

Thursday’s deluge of dour economic data — along with some investors looking to sell after weeks of gains — was enough to send 86% of stocks in the S&P 500 down and European stocks sharply lower.

“This is the saddest day for the global economy we have ever seen” in the 50 years that economists at High Frequency Economics have been following economic data, they wrote in a report. “The statistical offices of the economies we watch pumped out 19 economic reports overnight. They revealed historic declines of activity and surging unemployment on a scale we have never seen before. We are sad.”

Besides the jobless figures in the United States, which brought the total to 30 million in just six weeks, data released on Thursday showed that consumer spending plunged a record 7.5% in March from the prior month. That’s crucial for an economy where consumer spending makes up 70% of the total.

Stocks that tend to be most closely tied to the strength of the economy had the day’s biggest losses. Raw-material producers lost 3% for the largest loss among the 11 sectors that make up the S&P 500. Financial and energy stocks were close behind.

“This is a bit of fear that there is not enough of a rebound to restart the parts of the economy that are not connected to work-from-home,” said Rob Haworth, senior investment strategist at U.S. Bank Wealth Management.

Among European countries that use the euro, the economy shrank by 3.8% in the first three months of the year from the quarter before. That’s the biggest contraction since records began in 1995. Discouraging data also came in on China’s economy, which is concerning for anyone expecting a first-in-first-out economic wave.

“As we look to reopening here in the U.S., the hope is that activity bounces,” Haworth said. “China is certainly ahead of us in reopening and for them not to have a bounce a full month in is a little concerning for the market.”

The yield on the 10-year Treasury edged up to 0.63% from 0.62% late Wednesday. It started the year close to 1.90%. Treasury yields tend to fall when investors are downgrading their expectations for the economy and inflation.