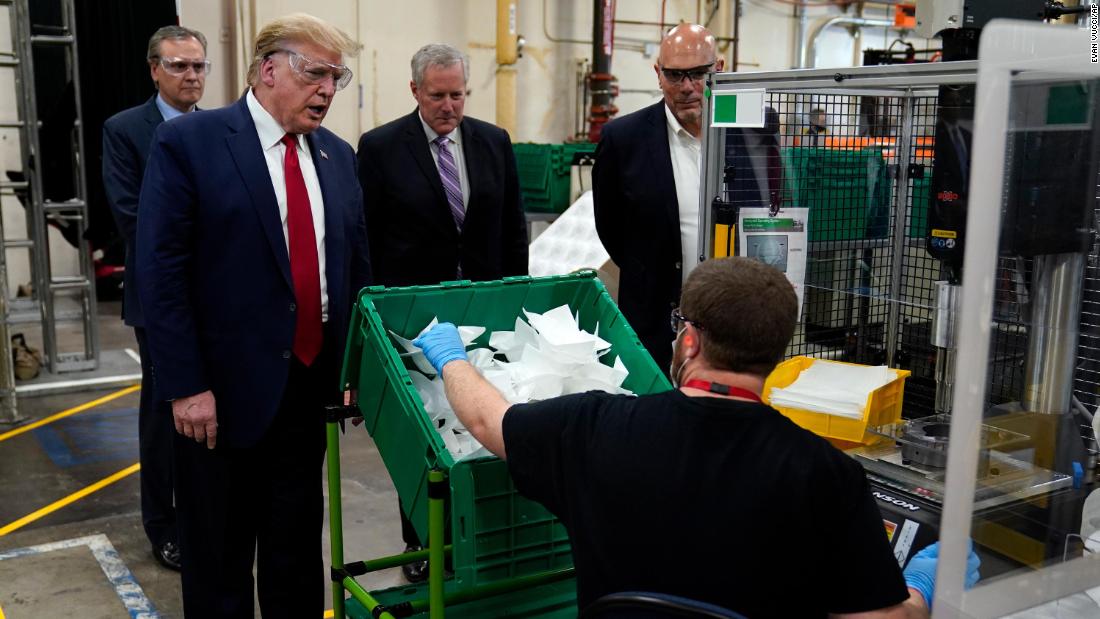 In the photos of the event, Trump did not wear a mask. During the visit to a mask-making plant. And against Centers for Disease Control and Prevention recommendations that all people wear “cloth face coverings in public settings where other social distancing measures are difficult to maintain (e.g., grocery stores and pharmacies), especially in areas of significant community-based transmission.”

But he insisted Wednesday that he did, in fact, wear a mask during his Arizona visit — but not when the cameras were around.

“I had a mask on for a period of time,” Trump said in the Oval Office on Wednesday. “I had it on back — backstage. But they said you didn’t need it, so, I didn’t need it. And by the way, if you noticed, nobody else had it on that was in the group.”

There’s SO much going on in that quote.

The insistence that he wore a mask — you just didn’t see it! And that’s not his fault! (According to a Honeywell spokesman, Trump was permitted not to wear a mask.)

But the really telling part of that quote is Trump’s use of “backstage” to describe where he had a mask on. As in, when he went on stage — meaning, in this context, where there were TV cameras rolling and photographers taking his picture — he didn’t wear the mask.

Which raises a simple question: Why? After all, if he had one on at some point, why not just leave it on as a way to model proper behavior to the public?

I have an answer!

Remember that Trump views his entire presidency through the lens of television — mostly reality TV and cable news. He is very, very focused on how he is portrayed and perceived. And he wants the image that the public gets of him to be that of a strong and fearless leader.

Which, in his mind, does not include wearing a mask when he is, uh, on stage.

Remember what Trump said about whether he would wear a mask when announcing the new CDC guidelines on mask-wearing in mid-April: “I don’t think I’m going to be doing it. … Wearing a face mask as I greet presidents, prime ministers, dictators, kings, queens — I just don’t see it.”

So, mask-wearing is fine, in Trump’s mind, when you are backstage. But it’s not the sort of thing that he does when people, you know, are actually watching.

Politicians — not just Trump — are a vain species. They want to look their best at all times. It’s why there’s an unwritten rule in politics that no candidate should ever put on any sort of hat or headgear in public if they can avoid it. (Thanks, Michael Dukakis!)

The problem? We are entering a period of time — with more states reopening even as coronavirus continues to sicken 30,000+ people a day nationally — in which wearing a mask in public settings may be our best defense against another surge of the virus.

Given that, it might be nice for Trump to wear one — especially as mask-wearing has become increasingly political.

But Trump’s not going to that. Why? Because he doesn’t want to.