After R, now K is key: New rate measuring variation in spread of infection becomes crucial to fighting second wave of covid by tracking superspreader events which could reignite illness

The R number has been guiding Government on when to lift lockdown. But the K number will become crucial for fighting a second wave, scientists believe.

The K value helps indicate how many cases of the coronavirus are caused by ‘superspreader’ events by measuring variation in the spread of disease.

For COVID-19, many outbreaks have been blamed on so-called ‘super-spreading’ events, where ‘super-spreader’ people have the opportunity to infect dozens others.

Around one in ten people who get the virus are labelled ‘super-spreaders’ because they are highly contagious. The majority of COVID-19 cases, around 80 per cent, are caused by this small group.

The R rate is slowly being quashed by unprecedented restrictions on movement and proximity during the lockdown.

But limiting superspreader events – including sports games, concerts, or even gym classes – will become key in further flattening the infection rate and keeping the crisis under control, scientists have said. 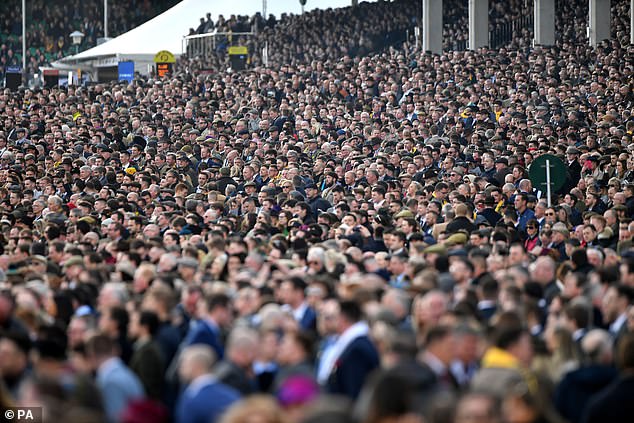 Limiting superspreader events – including sports games, concerts, or even gym classes – will become key in further flattening the infection rate and keeping the crisis under control, scientists have said. Pictured: Cheltenham Festival

Ministers are currently focused on reducing the ‘R’ to ease the lockdown.

The R rate is how many people one infected person transmits the virus to on average. If it is 3, it means 10 people would pass it on to 30 more, and so on.

Governments everywhere want to force the reproduction number down from about 3 (the natural R number if no action was taken) to below one. An R rate above 1 would cause cases to spiral uncontrollably.

The most recent estimates for the UK are that R is between 0.7-1, and Sage warned last week the UK was on the brink of surpassing 1.

Once life starts returning to some form of normality, scientists say the K number will guide how to control the virus moving forward.

AVOID MASS GATHERINGS UNTIL A VACCINE IS FOUND, SCIENTISTS SAY

Avoiding mass gatherings until a vaccine is developed or herd immunity emerges is the best way to prevent the spread of COVID-19, a study claims.

Scientists used computer simulations to model what would happen to the trajectory of the pandemic under various scenarios.

It assessed how restrictions on home life, returning to school or work and ‘other’ interactions, such as at restaurants, concerts or bars, impacted the spread.

Researchers found that with mitigation efforts such as lockdown and quarantine in place, the key to curbing the spread of the disease is to stop ‘superspreader’ events.

Academics from the universities of Copenhagen and Roskilde split human-to-human interactions into three categories and inputted them into computer simulations.

If the world was to return to normal, with all restrictions eased, these superspreader events would be a drop in the ocean, making little impact on the spread of the virus.

However, when the R rate is being quashed by unprecedented restrictions on movement and proximity, the superspreader events become key in further flattening the infection rate.

Writing in their study, the researchers write: ‘The simulations demonstrate that the best strategy is to focus on limiting contacts in the “other” category.

‘This in particular suggests that limiting diffuse social contacts in settings such as bars, transportation, restaurants, parties, concerts and lecture halls is far more effective than limiting the same amount of contact events in the “home” and “school/workplace” setting.’

The K number tracks the extent to which new outbreaks are caused by a few ‘superspreading events’, The Sunday Times reports.

This K measure captures variation in the way a disease is spread. Not everyone passes the virus on at the same speed, and not every environment poses a risk to mass transmission.

If the K figure is close to one, as with influenza, a virus will move relatively evenly through the population without variation.

SARS-CoV-2 is estimated to have a large variation, which means it doesn’t follow a simple pattern.

In the case of Covid-19, the K is thought to be 0.1 to 0.5 per cent, according to researchers at the London School of Hygiene and Tropical Medicine.

Their findings suggest the majority of secondary transmission may be caused by a very small fraction of individuals.

In other words, 10 per cent of people are highly infectious, and lead to 80 per cent of transmission. These people may be called ‘super spreaders’.

The other 90 per cent of individuals don’t actually spread it to many other people. They are responsible for the remaining 20 per cent of Covid-19 transmission.

This has huge implications for governments trying to ease restrictions but avoid a second wave of infections, according to Adam Kucharski, an associate professor at LSHTM who was involved with the research.

‘It could be that you have a lot of cases that crop up and don’t infect anybody and you have one case who goes to a particular environment, or particular workplace, and sparks a very large outbreak,’ Dr Kucharski told The Sunday Times.

R, which the government is trying to keep below one, was important when Covid-19 was at its height. But now ‘it’s not just the average amount of transmission, it is also the amount of variation’, Dr Kucharksi said.

There have been multiple occasions where one individual case has lead to several other cases – even though the R rate is naturally around 3.

The Centre for Disease Control and Prevention reported a large outbreak that was the result of a choir rehearsal in Washington State on March 10.

Some 61 of the choir’s members attended the rehearsal, and one person had ‘cold like’ symptoms at the time. They later tested positive for COVID-19.

The rehearsal lasted for two-and-a-half hours, with attendees reportedly taking precautions not to mingle too much because they were aware the virus was already in the US.

Ultimately, an estimated 87 per cent of attendees later got sick. This includes 32 confirmed cases and 20 probable. Two people died.

Gyms, business conferences, nightclubs and concerts also lend themselves as the perfect place for the virus to spread, due to the setting and because there are many people for which a superspreader could come into contact with.

Cheltenham Festival in the UK would have provided perfect conditions for the disease to spread easily, researchers say.

Data gathered from millions of volunteers found coronavirus ‘hotspots’ shortly after the events, the BBC reported.

The focus of controlling the epidemic, and keeping the R number down, should therefore be to limit events where super-spreaders could wreak havoc.

The LSHTM researchers wrote in their paper, published in Wellcome Open Research: ‘As most infected individuals do not contribute to the expansion of an epidemic, the effective reproduction number could be drastically reduced by preventing relatively rare super-spreading events.’

Dr Kucharksi said: ‘If a handful of events generate most of your outbreak, then if you can find a way of identifying where and when those events are happening then that reduces far more of your transmission than if you were just trying to follow up every case as if they were the same.

‘The difficulty is you have to predict where these “superspreading events” happen.’