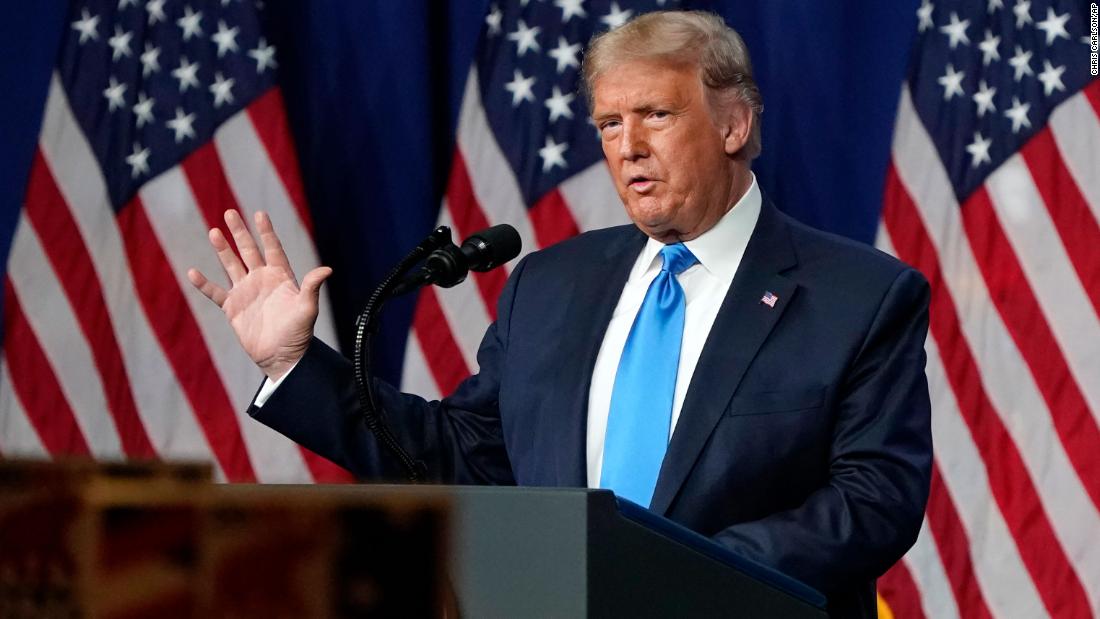 Speaking from Charlotte moments after he was formally renominated as the Republican Party standard-bearer, Trump delivered a screed that predicted a legally contested election in November and complained that Democrats were exploiting the coronavirus pandemic — still raging in the United States — to undermine his re-election.

“What they’re doing is using Covid to steal an election. They’re using Covid to defraud the American people, all of our people, of a fair and free election,” Trump said, without evidence, to applause from GOP delegates, who were gathering in North Carolina to conduct the formal business of the party convention.

It was hardly the optimistic message that Trump’s advisers have been relentlessly previewing ahead of this week’s renomination festivities. Instead, Trump’s speech was indistinguishable from the meandering, grievance-filled appearances he has been making in the lead-up to his scaled-down convention.

He repeated claims that, should rival Joe Biden prevail, the country would be overrun with violence akin to protests seen this summer in Minnesota and Oregon. He warned that Democrats were seeking to take away guns, religion and American energy production. And he raised grave predictions about the November vote, saying there were courts and judges across the country “who will hopefully give us a fair call” in a contested election.

“The only way they can take this election away from us is if it’s a rigged election,” he intoned, later warning delegates to “be careful” amid what he cast as a Democratic plot to steal the election: “Don’t let them take it away from you,” he said.

At other points, Trump complained bitterly about North Carolina’s Democratic governor, who he said wouldn’t allow him to host an in-person convention amid a national health crisis (delegates who did gather in Charlotte underwent a strict testing regime, and were encouraged to wear masks).

And he said he had told China he would “never let them forget what they did” in failing to contain coronavirus, even as he touted his own handling of a pandemic that continues to wreak havoc on Americans’ lives.

Trump did tout his record on the economy, proclaiming new trade agreements and improvements in unemployment that occurred before the coronavirus pandemic ravaged the nation.

He also offered, in very broad terms, some plans for a second term, including repeating a pledge to release a list of potential Supreme Court judges should additional vacancies occur on the high court.

But mostly off-script and stirred by what he complained was unfair coverage from the news media, Trump’s message did not reflect what both he and his advisers said over the weekend would be a more cheerful counterpoint to what they claimed was a gloomy Democratic convention.

“I think we’re going to see something that is going to be very uplifting and positive, that’s what I’d like it to be,” Trump said in a Saturday interview on Fox News.

“I think you’re going to see a very hopeful vision for America that he’s going to be unleashing,” senior adviser and son-in-law Jared Kushner said on CNN’s “Fareed Zakaria GPS.”

“This President will focus on the American people, this week coming up,” chief of staff Mark Meadows said on “Fox News Sunday.”

Instead, mounting the stage to chants of “four more years,” Trump began by inserting a recommendation and immediately launching into a complaint about his last election.

“Now if you really want to drive them crazy, you say 12 more years,” he said, going on to rail against alleged “spying” on his 2016 campaign.

There is no evidence that that former President Barack Obama spied on Trump’s campaign.

Still, Trump went on to claim Democrats “are trying to do it with the whole post office scam, they’ll blame it on the post office. You can see them setting it up. Be very careful and watch it very carefully.”

The President made his remarks as Postmaster General Louis DeJoy testified before a House panel amid Democratic accusations he’s working to harm postal operations ahead of the election.

During a particularly tense exchange, DeJoy said he “put word around” to people associated with the Trump campaign about public attacks on voting by mail, which DeJoy said were “not helpful.”