By Harriet Alexander For Dailymail.com

Eleven people involved in the set-up and planning of Tuesday night’s presidential debate have now tested positive for COVID-19, the city of Cleveland has confirmed, as debate moderator Chris Wallace revealed that Donald Trump and his family arrived too late to take the suggested COVID test.

‘The City of Cleveland is aware of positive cases of COVID-19 following the Sept. 29 presidential debate, they said in a statement.

‘In total, at this time, we are aware of 11 cases stemming from pre-debate planning and set-up, with the majority of cases occurring among out of state residents.’

They said no city residents appear so far to have contracted the virus as a result of this event.

Shortly before their announcement, Wallace on Friday afternoon told his Fox News colleague Bill Hemmer that the Trump party were not tested.

‘There was an honor system when it came to the people who came into the hall from the two campaigns,’ Wallace said.

Wallace arrived in Cleveland on Sunday, in time to be tested.

‘They couldn’t be tested by the clinic,’ Wallace said.

‘They didn’t arrive until Tuesday afternoon. So for them to get tested, there wouldn’t have been enough time to have the test and have the debate at 9 that night. They didn’t show up until 3, 4, 5 in the afternoon.’ 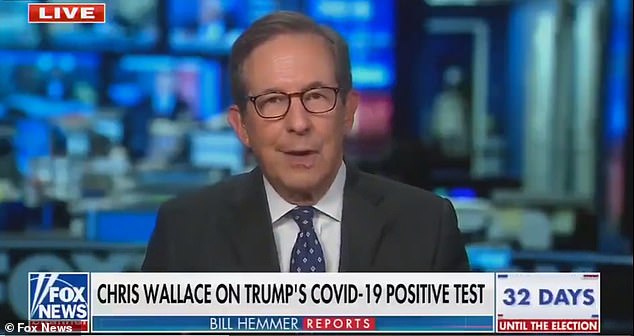 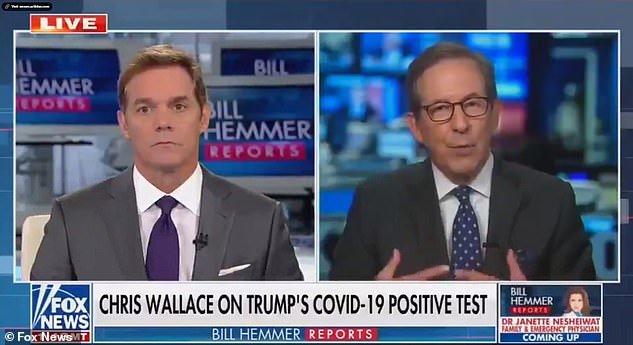 Wallace, who moderated Tuesday’s debate, explained the ‘honor system’ for the tests

‘Members of the Commission were not especially happy with the fact that the presidential party was not wearing masks,’ Wallace.

‘There seems to have been a disregard for the risks of this virus.’

Trump and his wife Melania both tested positive on Thursday evening, with the results disclosed shortly after midnight, in the early hours of Friday. On Friday evening the president’s condition worsened, and he was taken by helicopter to the Walter Reed medical center.

Ahead of the debate, doctors from a clinic in Cleveland, providing medical support for the event, asked all attendees to wear face masks.

The Trump contingent refused once in their seats, according to NBC News. 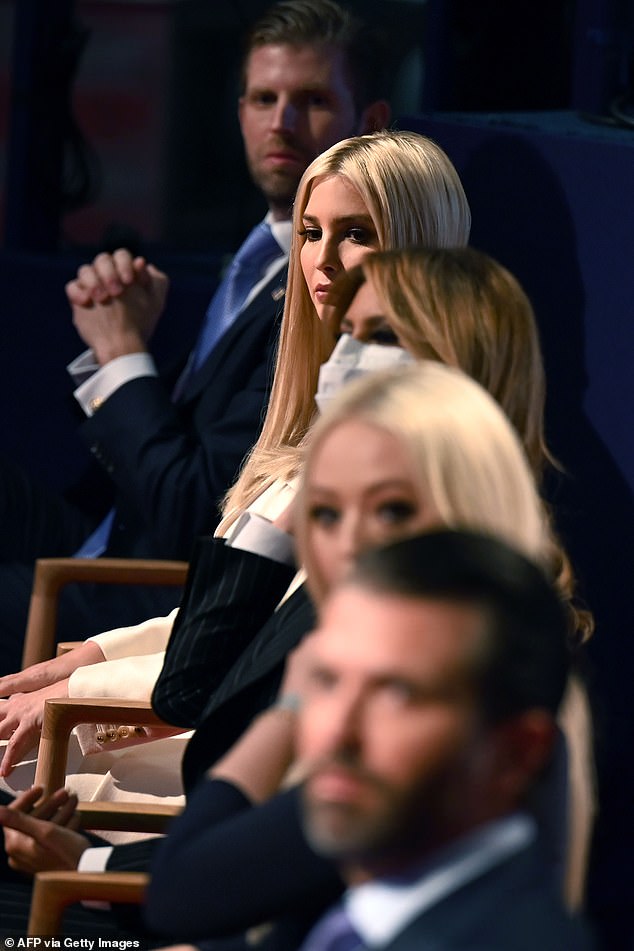 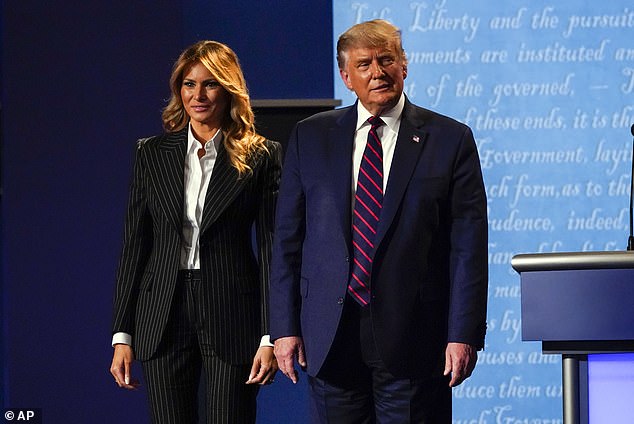 A Cleveland Clinic doctor in a white lab coat started to approach Trump family guests to ask them to put on masks.

She offered them one in case they did not have one.

She never approached any family members but as she got closer to them, someone shook their head and no one she reminded to put on a mask ended up putting one on.

Jill Biden, Senator Chris Coons and others sitting in the Democratic section began to look over, NBC reported.

When the doctor, who refused to comment to the press, walked off the floor, a debate hall staffer reportedly told her: ‘That’s all you can do.’

Biden and his wife, who were wearing face masks before and after the event, and were mocked by Trump supporters for doing so, have both tested negative for the virus.

Trump ridiculed Biden for following the CDC guidelines by avoiding large gatherings, wearing a face mask in public and socially-isolating himself.

‘I don’t wear a mask like him,’ Trump said. ‘Every time you see him, he’s got a mask. He could be speaking 200 feet away from him and he shows up with the biggest mask I’ve ever seen.’ 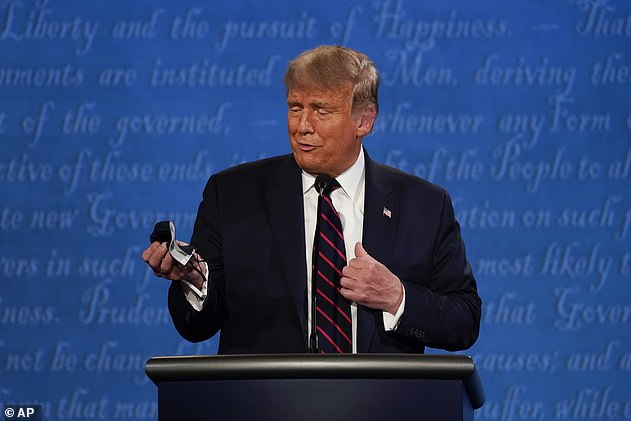 Trump during the debate pulled out his face mask, but said he didn’t wear it all the time

Lachlan Murdoch led a toast to Wallace at a Cleveland airport after the event. 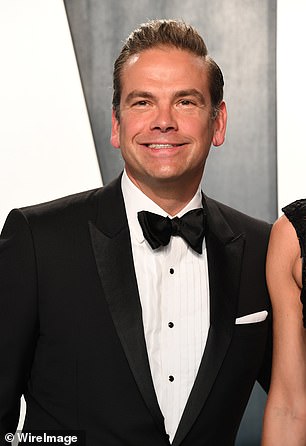 Lachlan Murdoch, the son of Rupert Murdoch, was present in Cleveland and is being tested for COVID-19

The gathering included two of the channel’s news anchors, Bret Baier and Martha MacCallum, along with the chief executive of Fox News Media, Suzanne Scott, and its president, Jay Wallace.

Sean Hannity is also being tested, after he broadcast live from within the debate hall and conducted a live interview with the president’s son, Donald J. Trump Jr, who sat only a few inches away from Hannity.

Other Fox News personalities were on a set outside the venue, including the political analysts Brit Hume, Dana Perino, and Juan Williams.

A source told the New York Times that Fox News was taking precautions, including testing, to ensure the safety of the hosts, reporters, and staff.

Earlier on Friday, before Trump went into hospital, Wallace appeared on Fox & Friends and told viewers: ‘Wear the damn mask’.

‘If I could say one thing to all of the people out there watching: Forget the politics. This is a public safety health issue.’ 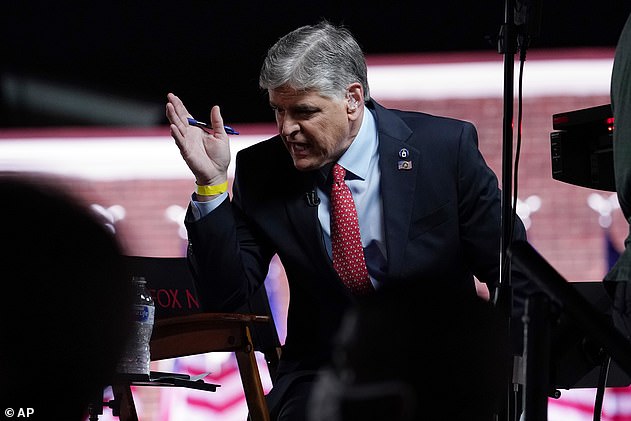 Sean Hannity, who broadcast live from the Cleveland venue, is also being tested