Still, the unprecedented day closed with fireworks and messages of unity and hope.

Though former President Donald Trump did not attend Biden’s swearing-in ceremony, he was publicly seen several times, including when he left the White House as president for the last time shortly after 8 a.m. ET.

Before boarding Marine One with the former first lady, Trump told reporters at the White House it was a “great honor” to serve as 45th President of the United States before saying goodbye.

Trump speaks at Joint Base Andrews before heading to Florida

The former President thanked his family and chief of staff, and promised to “always fight.” He also wished the incoming Biden administration “great luck,” though he didn’t mention his successor by name.

Melania Trump, meanwhile, told attendees that “being your first lady was my greatest honor.” The two then boarded Air Force One for the last time just before 9 a.m., taking the presidential plane to their Florida home. 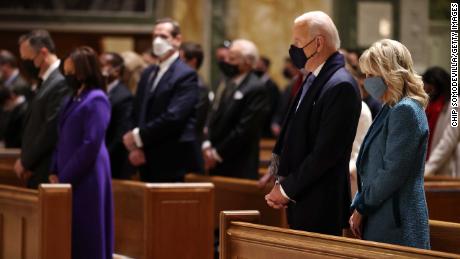 Just after the Trumps boarded Air Force One, Biden and first lady Jill Biden headed over to Cathedral of St. Matthew the Apostle in DC, where they attended mass with their family, Vice President Kamala Harris and her family. They were joined by the congressional leaders of both parties.

Incoming presidents typically attend services on the morning of their inauguration, often at St. John’s Episcopal Church, a small church across Lafayette Square from the White House known as “The Church of the Presidents.”

Biden arrived at the US Capitol shortly after 11 a.m. and Harris and her husband, Doug Emhoff, accompanied him and Jill Biden up the steps of the iconic building.

When Biden arrived at the inauguration stage, he greeted his predecessor and former boss, former President Barack Obama, on his way to his seat. He received a lengthy ovation from those gathered on the stage and sat down at 11:19 a.m. 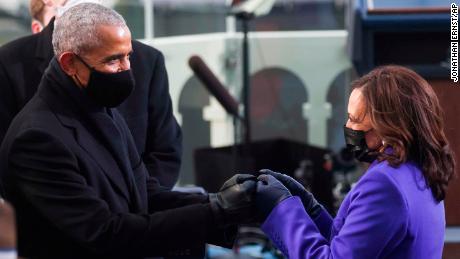 As she walked to her seat on the inaugural stage, Harris shared double fist bumps with Obama.

The gesture, exchanged shortly before Harris was sworn in as vice president, carried symbolic weight as Obama and Harris made history as the first African Americans to serve as president and vice president, respectively.

Harris is sworn in as vice president

Harris took the oath of office at 11:42 a.m. She used two Bibles during the oath, which was administered by Supreme Court Justice Sonia Sotomayor.

Biden is sworn in as the 46th president

Biden completed his oath of office at 11:48 a.m., using a treasured family Bible that dates to the 19th century and was held by Jill Biden. The oath was administered by Chief Justice John Roberts.

After being sworn in, Biden delivered an inaugural address in which he called for unity and pledged to be a “president for all Americans,” including those who did not support his campaign at his inauguration address.

The President also offered a forewarning his remarks, describing the nation as weathering a “winter of peril” amid the coronavirus pandemic.

The inauguration also featured several celebrity performances, including a rendition of the National Anthem by Lady Gaga. Jennifer Lopez sang a medley of American musical selections including “This Land is your Land” and “America the Beautiful,” and Garth Brooks performed “Amazing Grace.”

Amanda Gorman, the nation’s first-ever youth poet laureate, also delivered a poem in which she challenged Americans to “leave behind a country better than the one we were left” and unify.

Former Vice President Mike Pence, who attended the ceremony even though Trump did not, was met with bipartisan applause when he and his wife, Karen Pence, walked out onto the inaugural stands earlier Wednesday.

Later, as Harris and Emhoff bid the Pences farewell outside the Capitol, the two couples shared a laugh as the Pences began their private life.

The President and vice president also received congressional gifts, as is customary, including a painting by a Black painter from the Civil War presented to Biden by Sen. Roy Blunt, a Missouri Republican. Minnesota Democratic Sen. Amy Klobuchar presented Biden and Harris with Lenox crystal vases, while House Speaker Nancy Pelosi and now-Senate Minority Leader Mitch McConnell presented the President and vice president with American flags.

Biden and Harris went from the Capitol to Arlington National Cemetery for a wreath-laying ceremony with three former presidents — Obama, George W. Bush and Bill Clinton — at the Tomb of the Unknown Soldier.

Biden and his family got out of the presidential motorcade to walk down the stretch of Pennsylvania Avenue outside the White House. The President stopped a few times to greet people along the route, including Washington Mayor Muriel Bowser and NBC’s Al Roker.

The Bidens enter the White House

Shortly before 4 p.m., Biden entered the White House for the first time as the 46th commander in chief. He and the first lady paused for a moment on the North Portico as “Hail to the Chief” played.

They embraced, waved to cameras and walked alongside their extended family into the Grand Foyer to begin his presidency.

Harris returned to the Capitol to swear in three new Democratic senators: Georgia’s Jon Ossoff and Raphael Warnock, and California’s Alex Padilla, who replaced Harris in the chamber.

Their swearing-in officially gave Democrats control of the Senate for the first time since they lost the chamber in 2014. Harris will wield power as the Senate’s crucial tie-breaking vote.

Harris laughed as she read a line referencing her own resignation from the Senate as part of the swearing-in.

“The chair lays before the Senate two certificates of election and a certificate of appointment to fill the vacancy created by the resignation of former Sen. Kamala D. Harris of California,” Harris said.

“Yeah, that was very weird.”

Biden got down to work in the White House later Wednesday, finalizing over a dozen executive moves by signing a flurry of executive orders, memorandums and directives to agencies.

“There’s no time to start like today,” Biden told reporters in the Oval Office as he began signing a stack of orders and memoranda. “I’m going to start by keeping the promises I made to the American people.”

Biden warned new White House employees during a swearing-in ceremony that he would terminate them if he found them trashing one another.

Making explicit that he wanted to break with the toxic environment that pervaded the West Wing during the previous administration, Biden said he wanted his staff governed by collegiality and respect.

“If you’re ever working with me and I hear you treating another colleague with disrespect, talking down to someone, I will fire you on the spot,” he said. 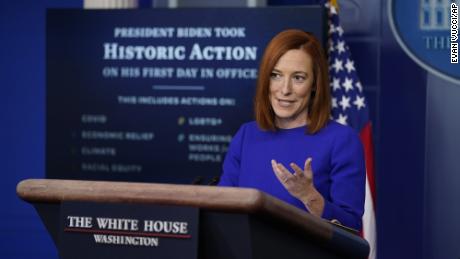 Psaki said that upon accepting the job, she was committed to “bringing truth and transparency back to the briefing room.”

She continued, “There will be times when we see things differently in this room, I mean among all of us. That’s OK. That’s part of our democracy, and rebuilding trust with the American people will be central to our focus in the press office and in the White House.” 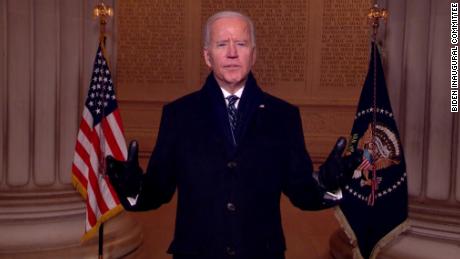 Standing in front of the Lincoln Memorial, Biden reiterated his call for unity Wednesday evening during a speech at the primetime inauguration special “Celebrating America.”

“It is humbling to stand here in this place in front of these sacred words. Humbling out of respect to President Lincoln and the office we now share and humbling because of you, the American people,” Biden said. “As I said earlier today, we have learned again that democracy is precious and because of you democracy has prevailed.”

The star-studded 90-minute program kicked off with Bruce Springsteen performing his song “Land of Hope and Dreams.” 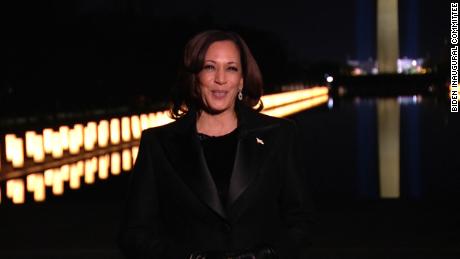 “This moment embodies our character as a nation. It demonstrates who we are, even in dark times. We not only dream, we do. We not only see what has been, we see what can be. We shoot for the moon, and then we plant our flag on it,” she said.

“We are bold, fearless and ambitious. We are undaunted, in our belief that we shall overcome, that we will rise up. This is American aspiration.” 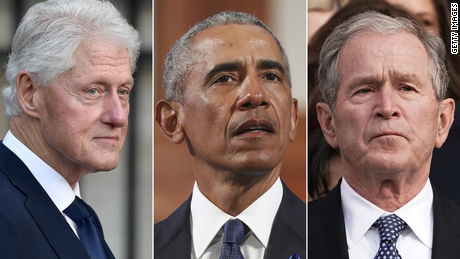 Former Presidents Barack Obama, George W. Bush and Bill Clinton honored Biden as America’s new leader while echoing his message of unity. In a video message recorded Wednesday afternoon as part of the “Celebrating America” inauguration concert, the trio each wished Biden well as he steps into the White House.

“I think the fact that the three of us are standing here talking about a peaceful transfer of power, speaks to the institutional integrity of our country,” Bush said.

“America’s a generous country, people of great hearts. All three of us were lucky to be the president of this country,” Bush said, adding: “Mr. President, I’m pulling for your success. Your success is our country’s success. God bless you.”

“One of my fondest memories of the inauguration was the grace and generosity that President Bush showed me, and Laura Bush showed Michelle,” he said.

Clinton, meanwhile, said the nation was “ready to march” with Biden.

“You have spoken for us today. Now you will lead for us.”

Fireworks over the nation’s capital 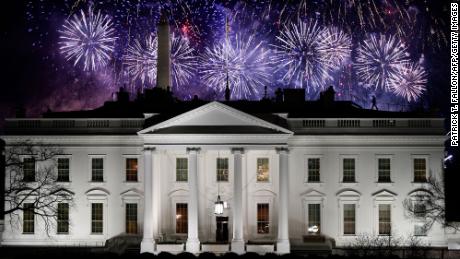 An unprecedented day came to an end with stunning fireworks.

The President and first lady watched the celebratory display from the Blue Room Balcony above the White House South Lawn. The vice president and her husband watched from the Lincoln Memorial as singer Katy Perry performed her song “Firework.”