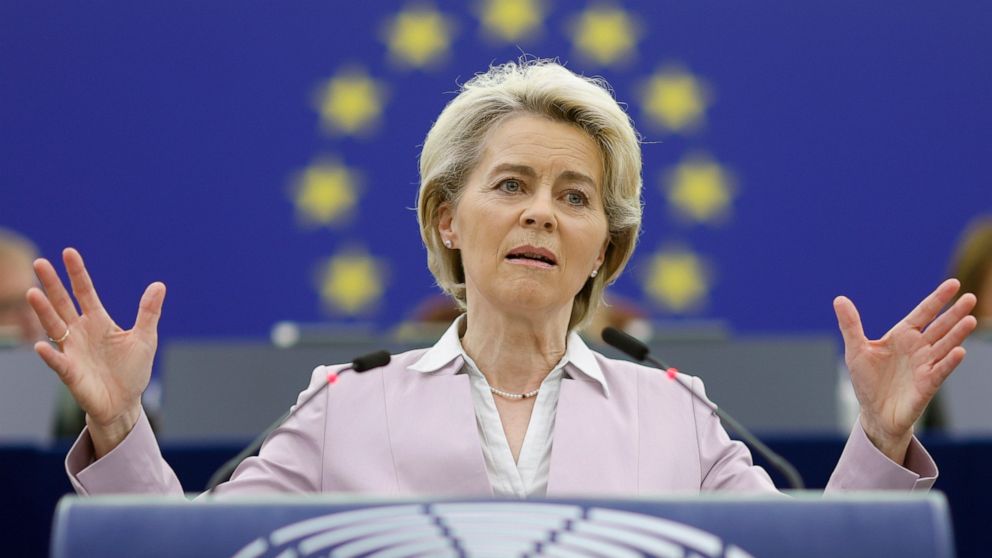 European Commission President Ursula von der Leyen delivers a speech during a debate on the conclusions of the European Council meeting of May 30-31 2022, Wednesday, June 8, 2022 in Strasbourg, eastern France. (AP Photo/Jean-Francois Badias)

BRUSSELS — The future of car transport in Europe may become clearer — and cleaner —on Wednesday when the European Parliament decides whether to ban vehicles with a combustion engine starting in the middle of the next decade.

The European Union assembly’s scheduled vote later in Strasbourg, France, is part of EU draft legislation to step up the fight against global warming. Cars account for around 12% of European emissions of the greenhouse gases blamed for climate change.

The spotlight is on a provision that would force automakers to lower carbon-dioxide emissions by 100% in 2035, a step that would amount to an EU prohibition that year on the sale of new cars powered by gasoline or diesel.

The car industry and some political voices are urging a more gradual transition to fully electric fleets, with a 90% CO2 reduction in 2035 as a possible compromise.

Whatever the 705-seat Parliament decides on tougher emissions-reduction targets for vehicles, a final EU agreement will come only governments in EU nations also give their verdict in the coming weeks or months.

The draft law on cleaner cars is part of a package of proposed European legislation that would slash EU greenhouse gases by 55% in 2030 compared with 1990 rather than by just a previously agreed 40% over the period.

A big portion of these cuts would come from power plants and factories. These two sectors, unlike cars, have their greenhouse gases curbed in the EU by a European emissions-trading system that every year reduces the total supply of required pollution permits.

Earlier Wednesday, the EU parliament failed to advance this part of the climate package because of a split over the pace at which the free allocation of some emission permits — as opposed to the auctioning of them — should be phased out. The assembly asked its environment committee to reopen deliberations on the matter. As a result, the EU parliament also delayed its verdicts on two related initiatives.

One is the creation of a Social Climate Fund to help vulnerable households cope with the planned clean-energy revamp — an issue that has become more politically sensitive as Russia’s war in Ukraine has sent fuel prices soaring.

The second is an unprecedented import tax known as the Carbon Border Adjustment Mechanism. The planned CBAM is a first-of-its-kind tool that would allow the EU to raise the prices of some imported goods — including steel and aluminum — that are spared climate-protection costs faced by manufacturers based in the bloc.

Follow all AP stories on climate change at https://apnews.com/hub/climate.